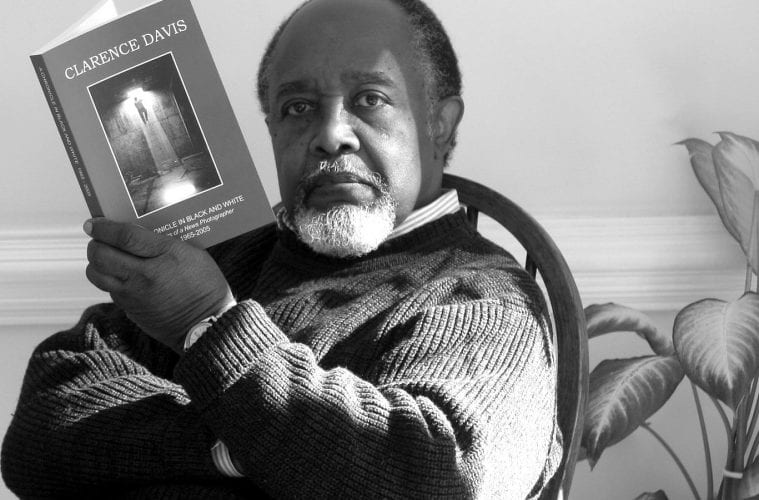 Q&A: Clarence Davis on his life in photography; exhibit and lecture at Hammonds House The powerful vocals of Brazilian songstress Virginia Rodrigues’ Sol Negro fill Clarence Davis’ Fayetteville home on a cloudy afternoon. He and his wife, Jeanie, are in the process of packing up their artwork, which includes an extensive African sculpture collection made by the Shona people of Zimbabwe. They are preparing to move back to their beloved New York after spending 10 years in Atlanta. Davis worked as a photojournalist at the New York Daily News for almost 30 years before he retired, covering every inch of New York’s five boroughs. He was the first black photojournalist at the newspaper, which inspired him to capture images of people in the city’s underserved Italian, Puerto Rican and black areas, not just in the crime pages, but also in their everyday lives. His work is on display at the Hammonds House Museum through December 31 in an exhibit called A Chronicle in Black and White. The exhibit is named after his book A Chronicle in Black and White: Memoirs of a News Photographer, 1965–2005, and features select images from the book. Assembled by guest curator Arnika Dawkins, the exhibit also features a section of work called Unseen Spirit by Davis’ friend and colleague Chester Higgins, who wrote the foreword to Davis’ book.

Davis was born in Atlanta on December 17, 1939, and his mother worked as a domestic and his father as a mechanic. He moved to Manhattan’s Lower East Side with his parents when he was 11 years old.

He fell into photography when he was 23 after working as a social worker in Harlem, because the camera helped him to earn people’s trust. And though Davis has been nominated for three Pulitzer Prizes and has won 11 New York Press Photographer Association Awards, he sees his nonprofit — the Africa Project, in which he trains inner city youth in photojournalism through a mentorship program and takes them to Africa — as his greatest achievement.

Before he leaves the Empire State of the South again, Atlantans have the opportunity to hear him speak on December 14 at the Hammonds House Museum at 3 p.m. His talk will cover his book, numerous trips to Africa, the emergence of digital photography in the newsroom and his mentors Gordon Parks and Ansel Adams. ArtsATL: How old were you when you got your first camera? What kind of camera was it?

Clarence Davis: I’m sure I got my first camera when I was pretty young, but it didn’t mean anything to me. Photography didn’t come to me until I was 22 or 23. I was working as a social worker in the 1950s, and a buddy of mine had a Voigtländer, which is a German 35mm camera with a fixed lens. I bought it off of him, but I had no idea how to use it. It was so complicated, so I had to go to the library and I got into the techniques, looking up everything I could find about photography. Before I knew it I was taking pictures of anything that moved.

ArtsATL: When did you know that you wanted to be a professional photographer? Davis: When I finally learned how to make that Voigtländer work for me, I started to do street shooting, where I just walked the streets and took pictures. I took pictures of relatives, neighborhood people. I created a little dark room and developed pictures for people for a fraction of what the store would charge them. Then I decided that whatever money I made with the camera I would put it back into the camera. I used my money to buy new equipment, and I was eventually able to get a Nikon that was easier to use.

ArtsATL: When did you become a full-time photographer?

Davis: In 1968, I was still working as a social worker and taking classes at Columbia University. At the time, the black students held a demonstration because they were not allowed to have black history classes at the university. They held a sit-in in Hamilton Hall, and I crawled through a window and locked myself in with the students for a couple of days. I took pictures and sold them to the New York Times, and that was the first time I was ever published. They were covering the story and running my pictures every day, and I even made the cover a few times. I sold all of those photos for something like maybe $75 or $85.

ArtsATL: How did you get to the Daily News? Davis: I was working at a small newspaper in Rockland County, New York, called the Journal News, and after three and a half years there I won photographer of the year. I was at a dinner in Albany and I met the photo editor of the Daily News, and he tried to get me to come to the paper. At the time I wasn’t interested, because I didn’t like the politics of the Daily News, so I started working at the Record in Bergen County, New Jersey, and I loved it there.

But, the Daily News made me an offer that I couldn’t resist. They were the largest-circulating daily newspaper in the Western world (I was one of 75 photographers), and it gave me the opportunity to get my pictures in front of a lot of eyes. In New York, every morning the bus drivers always took a news fold of the Daily News and placed it on the dashboard, so you could see it in the window. I saw my pictures everywhere.

ArtsATL: Why did you start the Africa Project?

Davis: The Daily News had about a 600,000 circulation in Harlem alone, but wasn’t doing anything with it. All they were showing were pictures of black people being arrested. So I’d take my driver and I went to Harlem, Bed-Stuy — ethnic neighborhoods –I worked all of those angles. I was taking more pictures than all of those other photographers combined. At the time, it certainly was not the Daily News with “I can’t breathe” on the cover a few days ago, and I think I had something to do with that change.

So, when I started the Africa Project in 1987, the paper backed me. I remember reading something in the New York Times that said that by the turn of the century 75 percent of all African American males would be incarcerated, on drugs or dead from violent crime. It just blew me away! It started as a program for young black men, ages 16 to 18, who came from poor families. Then, in 1990, we opened it up to girls.

I dropped out of college in 1962 and bummed around northern Africa and Europe for a year and a half. I took a Yugoslavian freight ship to North Africa for $100. That’s how I got to Africa; then once I was there, I spent some time in Tangiers, Egypt and Libya. I took a boat across Gibraltar to Spain, France, Germany, Italy and England. The French are some of the most wonderful people in the world. The French had this love of art, and African Americans exude art (I think that’s where that connection comes from). I did most of my growing up [as a young man] during that time.

The neighborhood I grew up in was full of all types of people, and they always talked about “the old country.” It gave me the impulse to see where the people from the Lower East Side came from.

The reason we went to Africa with the Africa Project is because there’s something extremely important — to be in a situation where people who look like you and know who they are have been governing themselves for thousands of years.”

ArtsATL: What are you working on currently?

Davis: I am working on a book called The History of Pulling. The argument I make in the book is that friends are equally [important], if not more important, than family in shaping who we become. It started off as a genealogy project. I traced my ancestors back to 1714 on my mother’s side of the family. [My relative’s] name was Richard Goolsby, and I was only able to do this because the slave owners [the Goolsbys] had such an unusual last name. The book talks about my family history, and then about how my friends all around the world have affected the way I see the world. ArtsATL: What is your affinity for black-and-white versus color photography?

Davis: Many of the photos were originally in color, but I turned them to black and white for my book. I wanted to create a metaphor about me and the society and the dualities of life. It’s not as complicated as we think it is.

There are four main disciplines in photography: photojournalism, fine art photography, snapshot photography and documentary photography. When you know what you’re doing, all of these things come together.

There’s no way that you can tell me that the cover photo of my book is not a great piece of photojournalism. That photo of the man coming out of a water tank [Light and Shadows] before he turns the water on, before no one will ever crawl into that space again . . . The duality of it is that this man is crawling into the light out of a hole. It can compete, at the very least, for a piece of art. People like to label things, but I don’t feel great photography should be categorized.