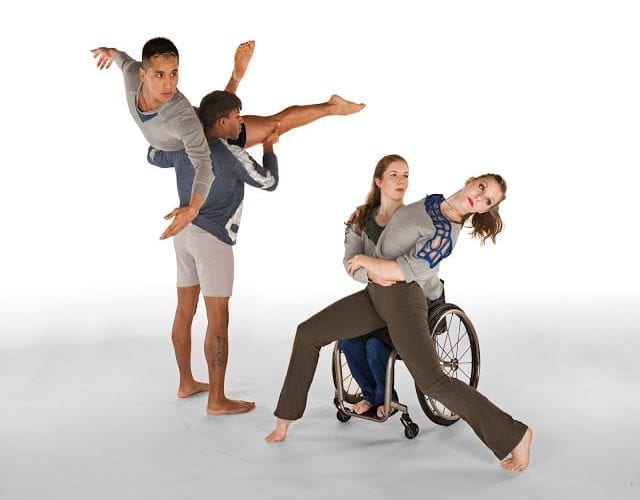 Creative Juices: With visionary Full Radius Dance, Douglas Scott trades in his wings for some wheels Douglas Scott, artistic director of Full Radius Dance, was walking through the National Gallery of Art in Washington, D.C., on his way to see a dance exhibit when he noticed something: black-and-white photos taken in Las Vegas and Coney Island, at rodeos and nightclubs. He stopped and looked. And looked again.

The photos were the work of 20th-century American photographer Garry Winogrand. They immediately struck a chord with Scott and soon became the creative impetus for his next dance work. “Right now I am saying the piece is going to be about the American experience,” to match the sensibility of Winogrand’s work, Scott says one morning over iced tea. “But who knows where it will end up. I will choose the photos that interest me the most and show them to the dancers. The poses in the photos will be a starting point. Then I’ll explore the theme we think we see in the picture.”

Photography is just one of many starting points for Scott’s creativity. He has choreographed works inspired by Edward Hopper’s paintings — he loves visiting art museums — the movie The Shipping News and Emily Dickinson’s poetry. His most recent work, Forgotten, was inspired by the World War I memorial in Atlanta’s Pershing Point Park, where it was performed. He draws from folk arts such as weaving and quilting, both of which his eastern Kentucky family has practiced for generations. Always in the back of his mind is Aristotle’s theory of dramatic structure. “I like my works to have a distinct beginning, middle and end,” he says.

The first two rehearsals of any Full Radius Dance work are “play days,” Scott explains. “I tell the dancers, ‘Don’t get married to any of this movement.’ I just need to see how it looks on the bodies.”

The “bodies” he works with are not those you expect to see in a dance company. Half of the dancers are in wheelchairs. Full Radius Dance is a physically integrated company, which means it’s a mix of able-bodied dancers and those with disabilities. But to hear Scott talk about his creative process, you wouldn’t immediately know this. For him, choreography begins not with what his dancers can and can’t do physically or how their wheelchairs will move. It begins with an idea. “I then store it away until Terpsichore comes down and anoints me on the head, or something like that,” he says, with a rare smile. Scott imagines the steps in his head first and doesn’t start moving until he gets into the studio. He may demonstrate a phrase that is designed specifically for the dancers in the chairs and then ask the standing dancers to translate it to their bodies. Or vice versa.

During rehearsals, he narrows down his idea in collaboration with the dancers. “It’s a fluid process,” he says. “Sometimes I think a piece is about this and it ends up being about that. And that’s fine with me. That’s part of the process. It’s exciting.”

Scott feels at his most creative at the beginning of a new piece and works quickly. Later “it’s more about refining the movement and doing the tricky lift 500 times so it’s not tricky any more.” Scott has created a variety of lifts using the wheelchair as a base. An able-bodied dancer may stand on the chair as it spins, or do a shoulder stand on the seated dancer’s knees. One or more dancers may climb on the chair to form a sculptural tableau.

Scott’s current challenge is to discover new lifts that don’t involve the dancers in chairs as the base. “It’s very tempting because a dancer in a chair provides a great solid base that can turn. But that’s not fair to the dancers. It’s a short cut. I know I can do better.”

His biggest surprises come when tells the dancers what he wants and in their minds it becomes something else. “Nine times out of ten, I like it better. It’s the same when somebody falls out of a lift. We’ll often keep the fall because it can be more interesting than the lift itself.”

Many years ago, one of the Full Radius dancers gave Scott his old wheelchair. He started teaching and choreographing from the chair and discovered a wealth of movement possibilities, fully realizing that, because he doesn’t have a disability, he could cheat. “I have abdominal muscles so I can pull to one side in a way that some dancers with disabilities can’t,” he says, moving his torso from side to side in the coffee shop chair. “Getting into the mechanics of body movement in the chair greatly informed my work.” In any given piece, the wheelchair dancers may roll, tilt or spin their chairs and interact with the able-bodied or “standing dancers” in a multiple of creative ways. Sometimes Scott will create movement for the dancers with disabilities without their chairs — on the floor for instance — but he has learned that this makes some audience members uncomfortable.

Music choices come late in his creative process, but Scott is already thinking about developing a sound-score for the Winogrand piece that will include snatches of pop music from the era in which the photos were taken. For the Las Vegas section, he may interlace the music with sounds of slot machines or a boxing match. And for Coney Island? He hasn’t decided yet, but “you can almost feel the sound of that place coming out of the photos.”

According to ArtsATL dance editor Cynthia Bond Perry, Scott’s choreography transcends “physical limitations to communicate a unique creative vision.” Scott says the company has been applauded for the level of integration because the dances don’t feature the able-bodied dancers separately from the dancers with disabilities. “Everyone is working together. In some companies, there is still some separation,” he says.

Scott has been working with dancers with disabilities for more than 20 years. His company performs about 10 times a year at venues such as the Shepherd Center and the Veterans Affairs Medical Center, and he teaches workshops on integrated technique across the country. He is also the founder of the Modern Atlanta Dance (MAD) Festival, a showcase for contemporary dance that requires a very different kind of creativity, both administrative and programmatic. MAD celebrates its 20th anniversary in May 2015. Full Radius Dance will present its annual repertory concert March 13 and 14 at 7 Stages.

Scott’s creativity takes dance to a new level; one that not only entertains but also opens our eyes to life’s possibilities. In October 2014, he received a Governor’s Award for the Arts and Humanities. The dedication reads in part: “His works demonstrate the strength, power and trust that are at the heart of the human spirit.”