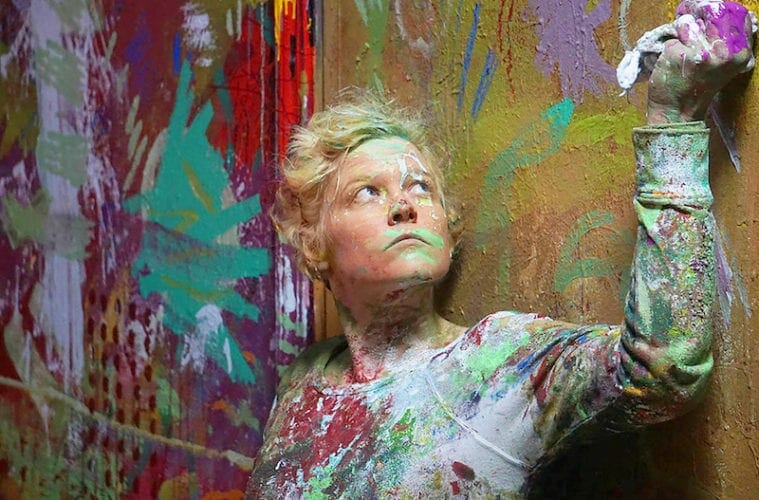 "My idea of performance developed in 2013 when I was diagnosed with a chronic illness," says performance artist Amanda Grae Platner. This piece was titled "Bipartisan." She begins a three-part work titled "Intimacy" on Saturday at the MINT gallery.

Q&A: Amanda Grae Platner makes sense of the world through paint and performance

Intimacy is a series of three Saturday-night performance-art events: Initiate at 7 p.m. this Saturday, Consent at 7 p.m. November 30 and Touch at 7 p.m. December 7 at MINT’s gallery at the MET in southwest Atlanta. Each performance is free, but reservations must be made, and admission is limited to 30 tickets per performance. Although there is paint and interactivity involved, performances are not recommended for children. 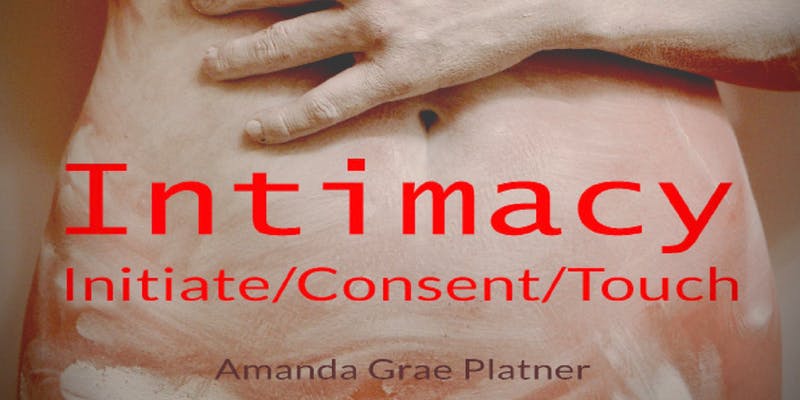 Frequenting the lakes, creeks and beaches of Fort Myers, Florida, Platner grew up surrounded by creative relatives. They were a ballpoint pen illustrator and handmade board-game maker,  a musician, writer and stained-glass crafter. Her stepfather made giant signs for Six Flags and Dollywood. But Platner’s path to performance wasn’t easy. When she was unhappy or frightened, she’d turn to her happy places — painting, swimming and her grandfather. He was a painter — a Bob Ross-kind of guy — sweet, soft-spoken and her rock.

Grae (pronounced like the color gray) is her middle name. “I’m a little weird outside of art,” she says, laughing, “but stuff that’s unpredictable and challenging is OK.” That could be why she references her age only by saying, “I’m older than most people think I am.” She’s an introvert who works out of her home studio in Gwinnett County and eats healthy foods, except when craving chocolate cake and candy. There’s not much that a few sour gummies can’t resolve. She enjoys her dog, a Labrador/border collie mix named Shuumi. “She’s my old lady; she’s 10, goofy, and loves everyone and everything, except chipmunks.” Really. Chipmunks beware. 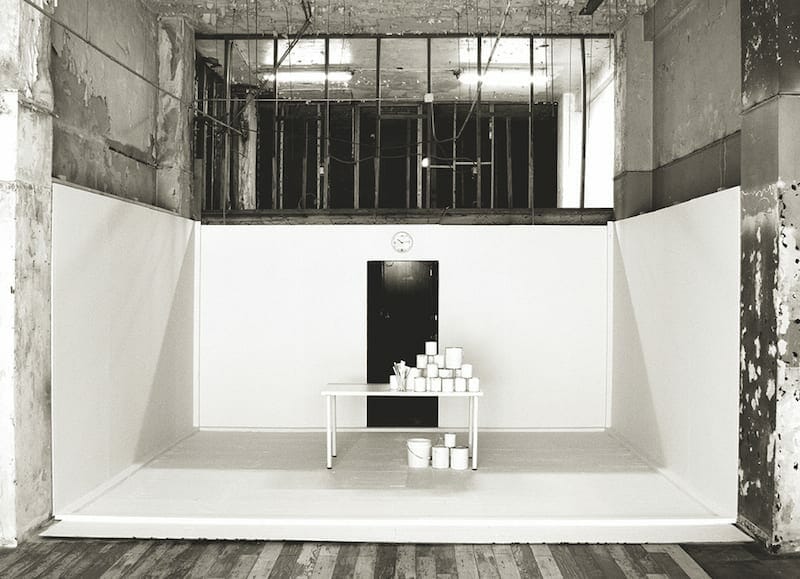 The scene is set for “Matriarchy,” an 80-hour performance-and-paint piece in 2017.

She visited with ArtsATL to talk about her performance path and why the “the paint always matters.”

ArtsATL: How did you discover performance art?

Platner: My idea of performance developed in 2013 when I was diagnosed with a chronic illness. I thought to use my body because that’s what I was feeling the most challenged about. I was trying to understand my body and deal with the loss of time, the inability to control my body and not being able to predict what the next day would bring.

I took paintings that were almost finished. I mean, I had spent a lot of time making them pretty. I would set up a kind of rigging or have someone else throw paint all over it so that it would just get ruined. Now the painting — not just my body — was at a loss, unpredictable and uncontrollable. Then, I’d go back to the paintings and work on them until I brought the two actions together. It would always end up better. I realize that whatever I deal with, if I practice it in art, it’s a safe place. As long as I make an effort, it’s going to be better. And when I’m painting, I don’t feel pain. It just all disappears, and I can focus and I’m happy and I get like a Zen thing going.

ArtsATL: Why do you explore messages of intimacy?

Platner: Consent is a big thing to me, and it was taken away at a young age, even before I understood what it was. When the [Brett] Kavanaugh accusations were going on, I realized that almost every woman has dealt with issues of consent. How do you learn to navigate that when you don’t get the chance? I think I’ve struggled with that for a long time. One thing I do know is that my brain works in performance.

In this performance series, Intimacy is the idea that you need to create your own space where you can tell people how they can and cannot treat you. I think people shame or blame people for the wrong part. Most people don’t dislike being touched. The shame is not in asking or not being honest about the situation. 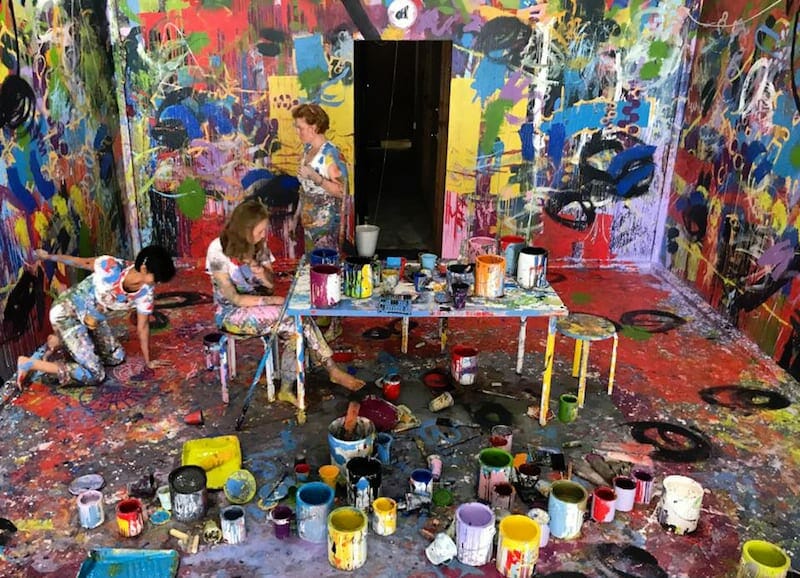 A moment from the 52nd hour of “Matriarchy,” with participating artists Katie Beall and Renuka Adhav. “We used 25–30 gallons,” Platner says. “I use good old house paint. It’s the cheapest and not too hard to wash off.” (Photo by Joe Dreher)

ArtsATL: Why is it important that your art is viewer-inclusive?

Platner: Vulnerability. I think most artists feel safer in their medium, but most people don’t have that. This is an opportunity for people to experience a connection through art. I’m not quick to be super close to people, but when it comes to my art, I will do anything and open myself up in any way. I get stuck in people’s world’s all day long. Performance is a way for me to have relationships with people in my world. Kind of a back and forth between me and the people in the audience. This is where I feel happy and safe. In this performance, the audience participation is everything.

ArtsATL: What have you discovered most about yourself after an interactive performance? About audiences?

Platner: The most meaningful thing is that I can do anything that I put my mind to. If there’s something that I’m passionate about, I’m gonna get it done. Even through sickness. I’m not a traditional performer, but stage health is important. I think people are looking for experiences and challenging things.

During Fighting the Current (2018), I was painting for 16 hours a day for two days, painting continuous straight-line, horizontal stripes. Six ropes were tied to me so audience members could move my arms. I learned there are four basic kinds of audiences. People who want to 1) experience and see but don’t get involved; 2) participate but aren’t confident; 3) go in full force; and 4) learn how to move with me, with others.

Participation in anything that’s going on is going to be more expressive, more dynamic, right? No wonder our communities are like this around the country. This connects to politics, home, work and relationships — from those hesitant to get involved to those who are too aggressive and don’t pay attention to others around them.

I don’t think any of these are wrong, but we’ve got to learn how to make it all work together to find a balance. If you’re willing to get in there and learn how to interact with the environment, you might get more out of it and find out more about yourself. 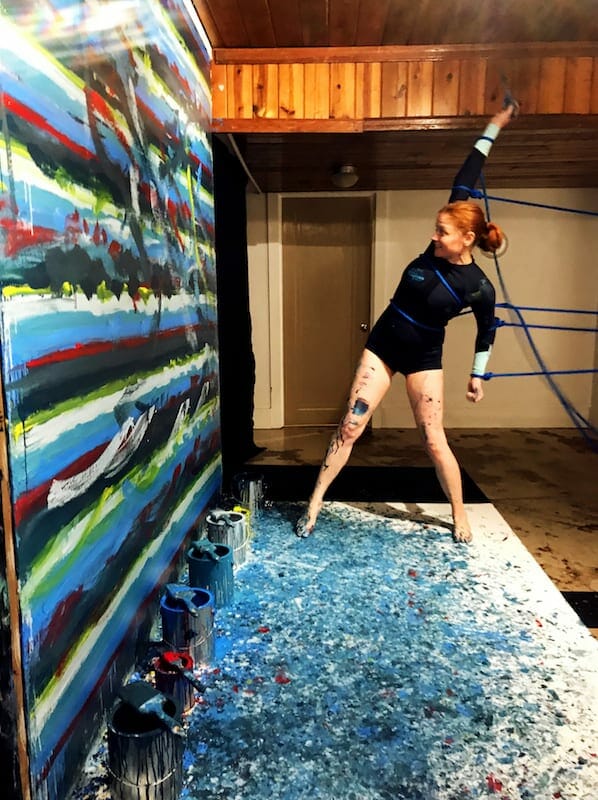 For “Fighting the Current” (2018), Platner painted continuous horizontal stripes 16 hours a day for two days. Ropes were tied to her so audience members could move her arms. (Photo by Joe Dreher)

ArtsATL: What kinds of things help you prepare for the physicality of performance art?

Platner: No rituals. No routines. I used to swim competitively. Ten years of 5 a.m. practices before school and then more after school. I know how training works, and I know how competition works. I know how to deal with pain and push through it. Because of my illness, I try not to overdo it too close to a performance, but once the adrenaline starts, I’m just fine. When it’s all over, that’s another story.

ArtsATL: How do you know when your thoughts or ideas need to become art?

Platner: I can’t shake the feeling. I have ideas all the time that I just can’t get out of my head. We started as kids. Everybody understands paint. It’s a way for people who are put off by performance art to get drawn in by the paint. How are people interacting, and what’s my place in this situation? I feel like I can’t go on until I’ve done it, or with collaborators, in order for the world to make more sense to me.

ArtsATL: Avoiding a spoiler alert, how will audience members participate?

Platner: Come in knowing that there’s a fresh start for all. The space is always bright white. The paint buckets are white, the brushes, everyone’s dressed in white. Even those who want to participate will get a white protective outfit to wear. (But don’t wear your finest, most expensive clothes.) Whatever happens in the space is its own world. They’ll receive instructions from me prior to each performance. There’ll be consent contracts (a letter of “I will” statements) that we will both have to sign.

I’ll give people a signifier, so I’ll know whether they want to participate or not. They’ll be able to withdraw that consent throughout the experience. So, if someone comes in thinking, I don’t want to be touched and then changes their mind, that’s fine, and vice versa. Performances aren’t choreographed in any way. It’s just basic responses. Only people who participate will have the opportunity to use cell phones to photograph and record. Oh, and there’s no talking during performances. After the performance, talking is allowed. I’ll even talk with folks, although I may not be ready to process words fully, but I should have enough adrenaline to give an answer. 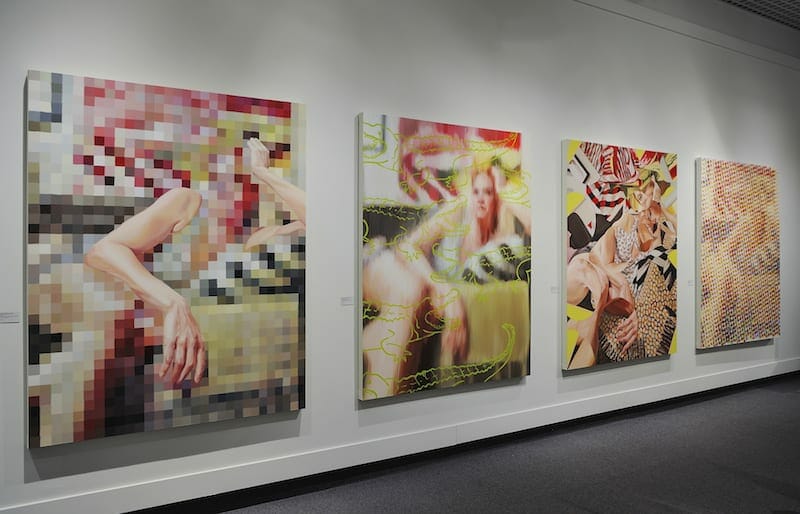 Platner’s “All These Options” series. Each oil on canvas is 75 x 60 inches. (Photo by Terrell Clark)

ArtsATL: How do you determine which colors to use? How much paint do you typically use during a performance? Particular kind of paint?

Platner: I usually pick vibrant colors. One of my favorites is that orangey-red often called “Fire.” I try to have a reason for the colors. So, it’s usually those “oops” cans of paint or some that’s been donated. The amount of paint depends on the performance. For instance, during Matriarchy (2017), we used 25–30 gallons. I use good old house paint. It’s the cheapest and not too hard to wash off.

ArtsATL: What influences the time frame for each performance, and how do you stick to the time?

Platner: I always have a clock during the performance but recently realized that I have this weird connection with clocks. Someone else had to point out that I have six clocks in my apartment. I guess I think about time a lot. I feel like people steal time. I feel like I’ve wasted a lot of time in my youth. And I even feel like I’ve been behind all my life. There have been times during a performance when my clock has been taken down and painted or moved. Good thing gallery folks typically do a countdown at the end.