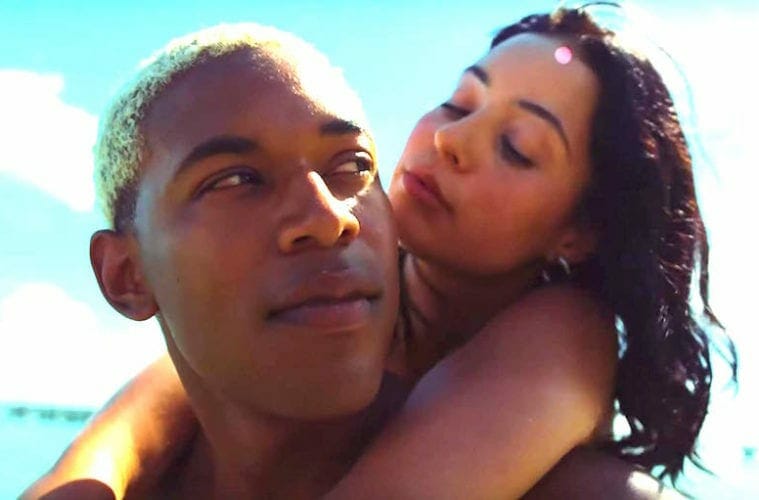 Director Trey Edward Shults finishes dinner at STK Atlanta with the cast of his latest film, Waves — Sterling K. Brown (This Is Us) and fresh-faced leads Kelvin Harrison Jr. and Taylor Russell in Met Gala-worthy designer togs — before heading to SCADShow. Shults, 31, is in town to prescreen and promote his third film for a curated audience of mostly black journalists, college students and influencers, who, afterward, look emotionally spent. Waves — open today at Phipps Plaza and Atlantic Station (and December 6 nationwide) — is a riveting and very 21st-century melodrama about the impact of trauma on a prosperous black family in South Florida. Shults, who wrote the script, is the white child of two psychologists. He often has transposed his own experiences onto thoughtful, resonant films like Krisha (2015) and It Comes at Night (2017).

Buoyed by off-the-chart empathy skills and an uncanny read on the small and large traumas of modern life, seeing Waves is somewhere between running a marathon and attending a wake, emotionally roller-coastering viewers through a succession of tragedies and epiphanies. The SCADShow audience reacted accordingly, with tears and shock, caught up in the story of how a good family can crumble when tragedy strikes. The mood turned joyous in a postscreening Q&A led by Liquid Soul’s Tirrell D. Whittley, as those in attendance discussed how sensitively and subtly Shults had conveyed this family’s struggles.

It’s only natural that art-house distributor A24 chose Atlanta, with its influential African American audiences, for an early preview screening. The premiere was a chance to test the film’s impact on the arbiters of whether Shults “got it right.” The audience’s enthusiastic reception seemed to suggest he, indeed, had.

Waves, a nail-bitter from its first scene, follows a young man from a well-to-do South Florida family though his adrenaline-fueled, anxious existence.

Tyler (Harrison, in a breakthrough role) drives his girlfriend, Alexis (Alexa Demie), down a highway bookended by ocean in Broward County, gliding and flying on a ribbon of music and love, playful and unfettered. He attends a Full Metal Jacket-worthy high-school wrestling practice that feels like a militaristic gladiator training camp, with young men being primed for assault. Masculinity in Waves is performative and unflappable, and you sense this young man’s need to never waver from that façade. Tyler’s world includes his sister, Emily (Taylor Russell),  Sterling K. Brown (“This Is Us”) as his unrelenting father and Renée Elise Goldsberry (“Hamilton”) as his stepmother.

But there are clues that Tyler’s bleached hair and confident mien hide something fragile in this contemporary Rebel Without a Cause. Like that 1955 existential melodrama, Waves is a teen movie with a difference, heartfelt and invested with an appreciation for the pressure cooker of high-achieving, suburban life. It’s far from a perfect film, with some plot implausibilities that at times make it hard to suspend disbelief, but Waves is heartfelt, beautifully made and conveys the hyperbolic intensity of being a teenager. These qualities will undoubtedly endear it to fans of films like Moonlight, If Beale Street Could Talk and Get Out, eager for more complex, nuanced renditions of the black experience.

In another age, the day-in-the-life vignettes that open Waves might read as hallmarks of innocence, of lives on the precipice of adulthood. But scenes that should feel expository and guileless convey a mounting sense of dread instead. Shults skillfully establishes a queasy mood of apprehension. He has created a potent read on the world we live in and the dangers that lurk at the margins of certain lives.

Shults’ persuasive portrait of the kind of loving, ambitious, middle-class black family not always seen in popular culture feels fraught and intense, bristling in Douglas Sirk mode (with shades of Kubrickian horror) that quickly stack the dominoes before they begin, inexorably, to topple. Renée Elise Goldsberry as Catharine, with Kelvin Harrison Jr. as her stepson, Tyler

Tyler’s stepmother, Catharine (Tony Award-winner Renée Elise Goldsberry, delivering an astounding expression of grief in the film’s second half), and sister Emily (Russell) offer gentle support. Tyler’s father, Ronald (Brown), however, demands more, pushing Tyler to achieve, engaging him in another form of competition at home, goading him to never let his guard down. Ronald wears a guise of self-preservation to cope in a world that sees his skin color as a threat.

With a startling intensity that blends a propulsive, pop-music soundtrack of Kanye, Frank Ocean, Kendrick and Radiohead, and addled point-of-view editing, Shults somehow conveys the mania, the sensorial assault of the teenage mind but also a loneliness and thoughtfulness that connects those male musicians’ and Tyler’s headspace.

Shults is attuned to the nuances of music and social media that allow teenagers to talk to each other, and he shows how those forms also express — even compound — the suffering. He captures the particular mania of modern life — kids micromanaged, honed and gilded like suburban trophies, and the gut-churning anxiety of preparing for a future that won’t countenance failure.

Waves is about loneliness, about the walls people build around themselves even within families and how, in the end, the waves connecting human beings can bring about disaster but also love.

Shults, himself a Floridian, has come to grips with the coexistence of paradise and parody in that state. He shows the lush, fragrant, soft nights alongside a landscape of abortion-clinic protesters, armed cops in school cafeterias, poisonous social media and addiction — a place where good and evil coexist in this compromised Walmart-pocked Eden.

His film debut came with the pressure-cooker domestic intensity of his John Cassavetes-reminiscent female fracas Krisha (2015), about a middle-aged woman recovering from addiction and coming apart during a family Thanksgiving. That film, in fact, won the John Cassavetes prize at the Independent Spirit Awards.

His It Comes at Night (2017), another rendition of family crisis, was a metaphysical thriller pitting unseen apocalyptic forces and a family hunkered in a remote forest cabin. His films crackle with a sense of foreboding, of forces acting upon people in ways that inspire an inevitable cataclysm. Shults creates dramas that occupy two planes — the outside world that acts upon his characters and a roiling, moving-beneath-the- skin psychological landscape.

“I think in the movies themselves, I am kind of working out stuff,” Shults says of his three deeply personal films, all of which tap into his own family dynamics and experiences with death, regret and loved ones’ addiction. But Waves is something special.

Says Shults: “It’s the most personal thing I’ve ever made.”