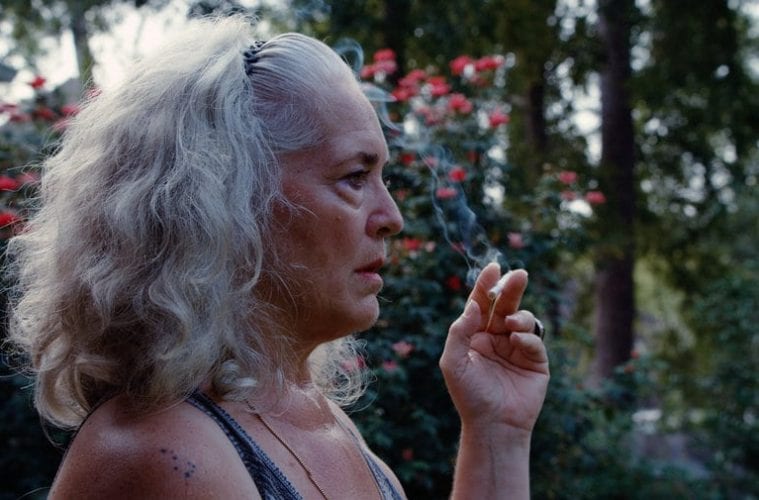 Review: “Remember” is worth remembering; “Krisha” evokes style over substance (and abuse)

When she parks at the curb of this suburban neighborhood and steps out of her pickup, it’s easy to peg Krisha just from the way she looks: billowing peasant-y dress, low-slung canvas bag, proudly flowing gray locks. She could easily be an off-center writer or painter or musician, or maybe a New Age healer working with crystals.

Any of those things may be what she is, or was. We never really find out. What we do find out in Krisha (the name of the movie as well as the actress who plays her, Krisha Fairchild) is that she’s an emotional minefield, armed with a lifetime’s worth of booze and prescription pills and ready to detonate.

Arriving at her sister’s Texas McMansion for Thanksgiving, Krisha exchanges hugs, and exclaims at the inches (and facial hair) newly gained from nieces and nephews she hasn’t laid eyes on in forever. She’s sober now. Nobody says the obvious things about what happened in the past. We learn what we need to know from the mix of forced, happy chatter and reflexive, sudden silences — especially when one of the young male relatives, Trey (Trey Edward Shults) shows up.

Shults is also the writer-director, and his movie follows Krisha for one day and night as she tries to navigate her way back into the bosom of the family that now holds her at arm’s length. But it’s Thanksgiving, and it’s family, so you know things are bound to go galloping straight to hell.

“I’m working on becoming a more spiritual person,” Krisha says to brother-in-law Doyle (Bill Wise) in a backyard jaw-wag. It’s the sort of line that could make some people groan, others nod in sincere support. Doyle just plays along, tossing in jokes — then turning the tables aggressively on Krisha, calling her out for her history of self-serving escapes from her responsibilities. Most especially her relationship with Trey, which we see is as important to Krisha (or should be) as the one she has with controlled substances.

Shot on a tiny budget, Krisha has won loads of praise and garnered awards while making the film festival rounds. And true, it’s pretty good. Still, the logistics (personal and practical) of how it was made are as interesting, maybe more so, than the film itself. Shults based the tale on a family member who turned up lit at a family get-together, while claiming to be sober, and shortly thereafter died of an overdose. A lot of the cast are his own family members, including Fairchild, his aunt, who’s basically performing a riff on one of her own relatives. And the movie was shot in pressure-cooker style over just more than a week in Shults’ parents’ house.

Making his feature debut as a director, Shults leans heavily on a jittery soundtrack (which tiptoes up to the sound of a horror-movie score) and aggressive camera choices (long tracking shots, abrupt cuts, slo-mo). It’s stylish overkill, working hard to create a tension that the script itself doesn’t always provide on its own. The movie sometimes feels more like a sizzle reel — a collection of clips showing what Shults can do — than a fully realized film.

While Fairchild (a professional actress in her own right) is solid in the lead, the seams sometimes show between the acting work of Shults’s family members, and the professional actors hired for the film. Also, for me at least, the amplified, emotional response when the title character, inevitably, screws up seems really over-the-top. (Did I mention the horror-movie music?) In the end, Krisha feels like a slow-burn build to a crisis that, when it arrives, is never explored in a really illuminating way. It’s mainly an exercise in creating the most effect possible with a limited budget and a (loving but) limited script.

Also out now, Remember, the opening night selection of this year’s Atlanta Jewish Film Festival, stars Christopher Plummer as nursing home resident Zev Guttman. He’s the sort of nice old man who talks to little kids on trains and plays the piano beautifully. He’s also packing a wad of cash, a Glock and a kill list. Oh, and he has dementia.

He frequently has to reread the instructions written by his friend Max (Martin Landau), who lives in the nursing home that Guttman himself escaped from, to remember his mission: He’s trying to locate one Rudy Kurlander, the brutal guard at the concentration camp he and Landau survived. And, when he does, kill the Nazi-in-hiding. Problem is, there are a bunch of people named Rudy Kurlander on his list.

An existential thriller, like a silver-haired Memento, the movie builds to a devilish gut-punch of an ending. Though it may fall apart when you think about it afterward, it’s fascinating while you watch. And Remember is one of director Atom Egoyan’s (The Sweet Hereafter) better movies in a good long while.