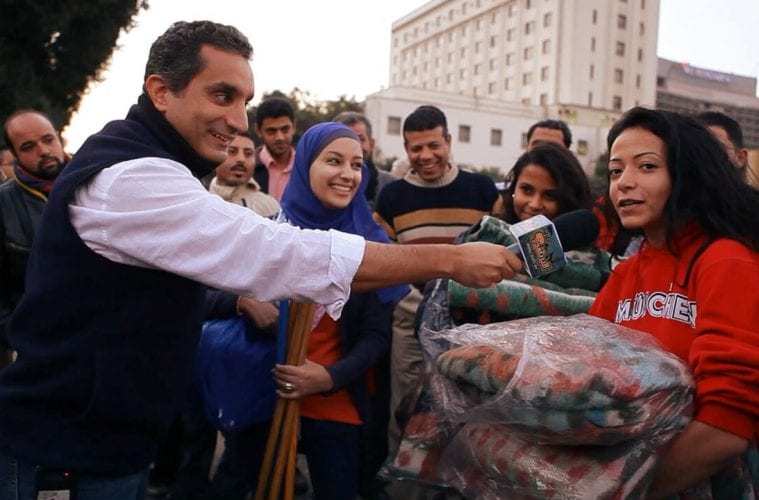 What do you do when your government becomes a military dictatorship and forbids freedom of speech that is critical of the regime? You can fight back with the one nonviolent weapon most bullies fear the most — satire. Heart surgeon turned comedian Bassem Youssef knows this is true because he became an overnight sensation in Egypt after launching a YouTube web series (filmed in his laundry room) that poked fun at his government.

From these humble beginnings to the network launch of his satiric news show Al Bernameg in 2012, Youssef quickly earned a following of 30 million viewers per episode and was soon dubbed “The Egyptian Jon Stewart.” All of this and more is chronicled in the highly compelling documentary Tickling Giants, directed by Sara Taksler and scheduled for a free showing at the Carter Center on Tuesday at 7 p.m. (A $10 donation to cover screening costs is suggested.) Taksler, a senior producer at The Daily Show, first met Youssef in June 2012 when he appeared as a guest on Jon Stewart’s program. Youssef’s TV series was not yet on the air, but he was already a cult figure among Middle Eastern audiences since the wake of Arab Spring 2011.

At the time, Taksler had no plans to make another film (she had previously codirected Twisted: A Balloonamentary, with Naomi Greenfield in 2007), but after meeting Youssef she realized there were much higher stakes involved in his use of satire and got his approval to make him the subject of a documentary. “I love taking a serious issue and finding a cathartic way to process it through humor,” she says. “Bassem was doing just that, but while under the microscope of a country where free speech was not yet settled.”

Although Tickling Giants succeeds as an affectionate portrait of Youssef, it is also particularly unsettling for its frank depiction of the repressive political climate in Egypt. The film’s loose, freewheeling style employs a chronological structure that proceeds from the waning days of Arab Spring to the cancellation of Al Bernameg in 2014 with Youssef and his wife and daughter eventually being driven into exile by the government of Abdel Fattah el-Sisi, Egyptian head of state and the Supreme Commander of the Egyptian Armed Forces.

In an interview with Taksler, we discussed some of the issues addressed in Tickling Giants and the current status of Youssef.

ArtsATL: Bassem Youssef grew up under the oppressive regime of Hosni Mubarak, so where did he get his ideas of democracy? Was Egypt a more democratic society in the early days of Mubarak’s reign in the eighties?

Sara Taksler: I don’t think Bassem gave much thought to politics growing up. He was never in need financially, and just took things at face value, as he’d never struggled. Even once the revolution started, Bassem wasn’t particularly interested in politics. It was only once he saw the media disparaging protestors, presenting facts that were different than what he’d seen with his own eyes, that he became interested in questioning authority.

ArtsATL: One thing I don’t understand in the film is the election process in Egypt and how new presidential candidates are elected. Who chooses the candidates?

Taksler: In Egypt, different parties present their candidates. It is a bit different than in the Western world, because people had not grown up with the possibility of a true, open election. In the US there are mock presidential elections in school. You have four-year-olds who want to grow up to be president. But in Egypt, a whole generation had never had the real possibility of a freely elected new leader. So, once an open election became a real possibility, lots of people threw their hats in the ring, and parties of people got behind different candidates.

ArtsATL: Do you have any insight on why the majority of Egyptians would chose a military leader and “stability” over democracy and personal freedom?

Taksler: It seems to me that it’s very popular to choose safety over freedom. This is true around the world, and we see it in the US often, too. We sometimes elect people who promise to keep us safe, even if we know they may not uphold some values that have been deemed important. The same is true in Egypt. People wanted stability, they wanted a familiar sense of safety. So, they chose to overlook the loss of certain rights when they thought they could feel more secure. ArtsATL: What is the current update on Bassem? Is he living in the US or Europe?

Taksler: Bassem lives in Los Angeles with his wife and daughter. He is trying to get his own show here, and goes on auditions to be an actor. [He is also currently on tour promoting his new book, Revolution for Dummies: Laughing Through the Arab Spring.]

ArtsATL: What does Bassem think about the timing of his arrival in the US during the first 100 days of President Trump?

Taksler: Bassem says he is the unluckiest bastard around, having fled a Middle Eastern dictator to move to the US, just in time for Trump, who is buddies with Sisi.

ArtsATL: What sort of reception is Tickling Giants receiving in your current exhibition tour?

Taksler: I feel so lucky about the reception we’ve been getting with Tickling Giants. I expected we might find an audience with liberals and Daily Show fans, and luckily, we’ve done that. What I didn’t realize was that we’d also have a big following with conservatives and libertarians. I’ve done interviews on conservative and Christian radio, with people who love the film. I never would have predicted that. What I’ve realized is, regardless of politics, people value free speech and a free press. There are people all over the aisle who are worried about limitations being put on speech, who want to make sure they speak up now. Also, I’ve been really happy to hear people starting a dialogue after seeing Tickling Giants, speaking about how the people in the movie are the types of “normal,” funny, smart people we are disparaging when we discuss a “Muslim ban.”

ArtsATL: Do you have any plans to direct another documentary or film in the near future?

Taksler: I would love to direct another film. But first, I want to make sure as many people as possible see and discuss Tickling Giants. On TicklingGiants.com, people can book community and educational screenings. Outside North America, we’ll be on Netflix starting April 10. And in North America, the film will be streaming and on DVD in June.