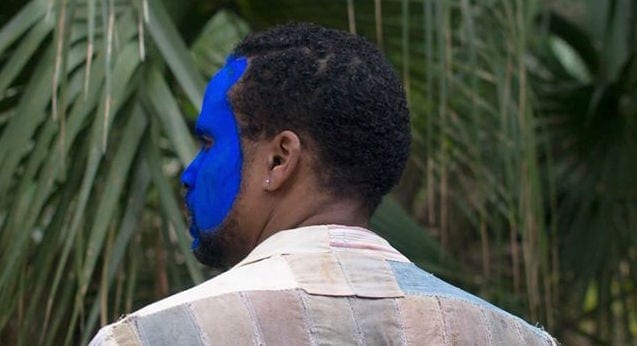 Masud Olufani has been named Georgia’s State Fellow by South Arts, and thusly is officially in consideration for the organization’s Southern Prize and Finalist awards. The Southern Prize gives the receiving artist $25,000 and a two-week residency at the Hambidge Center for Creative Arts and Sciences. The finalist prize is a gift of $10,000. Olufani and the nine other visual artists selected as State Fellows will be honored at the State Fellowship Awards on April 24 in Atlanta, where the winners of the Southern Prize and Finalist Prize will be announced.

“As a State Fellow for South Arts I see my primary role as a representative of the remarkable pool of talent within the state of Georgia,” said Olufani. “I hope to express this through my enduring fidelity to the professional practice of creativity and a desire to live a fully integrated life which sees all of human endeavor as a great and unfolding work of art.”

South Arts, a nonprofit regional arts organization, was founded in 1975 to build on the South’s unique heritage and enhance the public value of the arts. “The Southern Prize and State Fellowships will impact the careers of artists in our region,” stated Susie Surkamer, executive director of the organization. “These fellowships and awards are part of the support system allowing artists in the South to make a living in our region.”

The awards are aimed to acknowledge, support and celebrate the highest quality artistic work being created in the region. From January through March 2017, over 850 visual artists submitted work for consideration, and a panel of jurors reviewed each application with the sole criterion of artistic excellence to determine the nine State Fellows. A second panel of jurors is currently reviewing the State Fellows to determine the two Southern Prize awardees.

“There is a deep well of artistic talent throughout our region,” said Surkamer. “From traditional basket weaving through experimental 3D printing, the creative minds around us are producing brilliant work. The Southern Prize and State Fellowships are our way of celebrating the richness and diversity here in our backyards and shining a light on them for the region and the nation to see.”