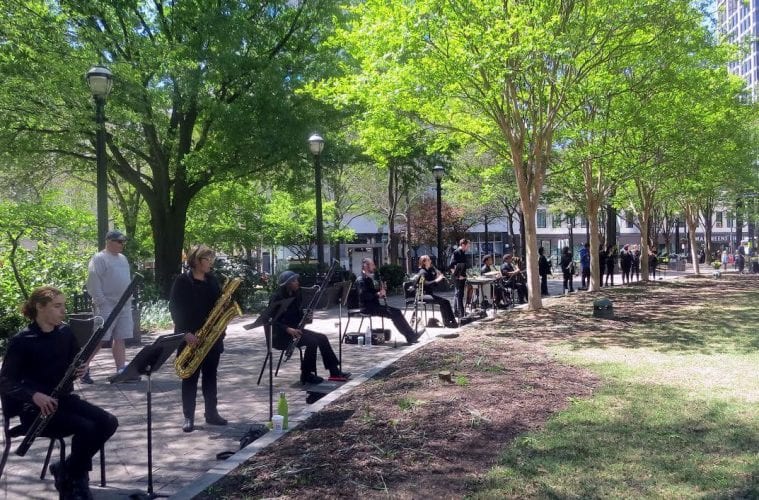 This past Friday and Saturday, the Georgia State University School of Music and contemporary music ensemble Bent Frequency presented three concerts of music by Pulitzer Prize-winning composer John Luther Adams. Born in Meridian, Mississippi, in 1953, Adams spent brief portions of his life in or near Atlanta before moving to the interior of Alaska, where he lived for 36 years — crucial to the evolution of his unique personal musical voice. Adams received the 2014 Pulitzer Prize in music for his orchestral work, “Become Ocean,” a composition that subsequently won the 2015 Grammy Award for Best Contemporary Classical Composition.

The first of these three concerts, a performance of Adams’ “Sila: The Breath of the World” (2013) took place at noon on Saturday in the open air at Woodruff Park. Originally scheduled for Friday afternoon, the performance was moved to Saturday due to anticipated chilly weather. Certainly the difference between Friday and Saturday made a difference in the swath of people who might attend, especially in those who might have passed through unintentionally as a part of their workday. Nevertheless, there were plenty of interested observers without overcrowding.

“Sila” was performed by a large ensemble spread out around the edges of Woodruff Park. Woodwinds were lined up along the lower east perimeter of the park; brass along the upper east side; strings to the southwest, under a grove of trees; a wordless chorus with megaphones central west side; percussion interspersed among those groups and on the north end. The audience was situated mostly in the middle, walking around and sitting or lying on the grass, in the middle of the music.

Lasting well over an hour, “Sila” progressed at slow to glacial speeds, producing wafting clouds of glowing, shifting sorties that spread across the grass, greening trees, and into a stunningly clear blue sky. The weather could not have been more perfect for the occasion: just warm enough to be comfortable, with occasional gentle breezes.

The urban environment contributed its sounds too: weekend-level traffic, including the buzzing glissandi of several accelerating passing motorcycles, and at the very end of the performance the rhythmic clanking of the trolley as it rolled by and came to a stop. Most remarkable was the sonic contribution of the considerable number of birds singing in the trees. The slow pace of the music brought attention to the rapid rhythms of their spontaneous song: human and avian collaboration at its best. “Sila” proved a remarkable, delightful connective experience.

I heard the premiere of “songbirdsongs” in late 1974, in this very same recital hall. That original version was scored for instrumental duo of one piccolo player and percussion. Anne McFarland played piccolo, and percussion was played by Alan Balter — who was not a percussionist but the amazing principal clarinetist of the Atlanta Symphony Orchestra at the time.

Effectively the “Opus One” of Adams’ professional work as composer, “songbirdsongs” has evolved over time. In the matured version on Friday evening’s concert, it was performed by two piccolos (Nicole Young and Jovana Damnjanović), four percussion (Brandon Dodge, Drew Hopper, Taylor Poole and Dominic Ryder) and celesta (Stuart Gerber). Although different from the original in terms of sonic scope, its seven movements remain true to its fundamental inspiration — in the composer’s words: “Echoes of rare moments and places where the voices of birds have been clear and I have been quiet enough to hear.” They are not literal transcriptions of birdsong, but translations — Adams’ musical responses to birdsong.

The mellifluous “Strange Birds Passing” (1983) was originally written for flute choir, but heard here in an arrangement by James Fusik for an octet of saxophonists, performed by Jan Berry Baker, Megan Bauman, Connie Frigo, Joshua Heaney, Bradley Karras, Brandyn Taylor, Jack Thorpe and Kyle White, conducted by Stuart Gerber. Although he has previously heard audio recordings of it, this concert marked the first time Adams has heard this transcription live.

“Qilyaun” (1998) is another percussion quartet, this time for four bass drums, played by Brandon Dodge, Tim Feeney Stuart Gerber and Caleb Herron. The musicians listened to a click track (an electronic metronome), which helped them coordinate the work’s extreme deceleration and acceleration of tempo. It is a physically dramatic, impressive work that takes the listener outside of themselves on a journey of the mind.

“roar” (2002) from “The Mathematics of Resonant Bodies” is a piece for solo tam-tam and prerecorded, processed sounds drawn from a tam-tam. I’ve heard Stuart Gerber play “roar” on at least one other occasion using a 60-inch tam-tam, but this time the instrument was about half that diameter, its advantage being a richer wash of harmonics.

“Make Prayers to the Raven” (1996–98) was Adams’ most “mainstream” music in the mix, drawn from a music-theatre piece for children. Scored for flute (Sarah Ambrose), violin (Adeliade Federici), cello (Jean Gay), harp (Ellen Foster) and percussion (Caleb Herron), it was conducted by Stuart Gerber. Adams dedicated this ear-friendly work to all children of interior and northern Alaska.

The program concluded with Adams’ “Red Arc/Blue Veil” (2002) for piano, percussion and electronically processed sounds. Tazawa and Gerber, whose piano and mallet percussion formed a single eloquent arc, played against multiple tempo relationships in the electronics.