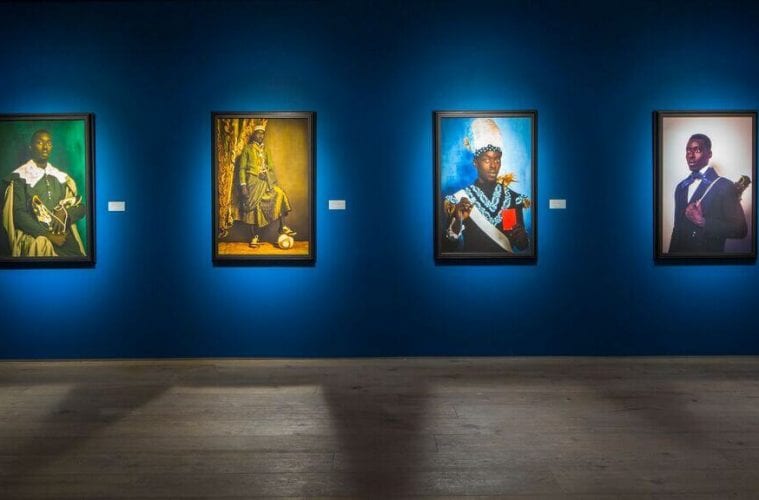 It’s always an interesting moment when an accomplished photographer first turns the camera on himself. During a recent residency in Málaga, Spain, away from his usual models and subjects of his native Dakar and his adopted city of Paris, photographer Omar Victor Diop began focusing his camera on the most available and pliant of subjects, himself. The result is the compelling 2014 series Project Diaspora, now on view at the Savannah College of Art and Design’s SCAD FASH Museum of Fashion + Film in Atlanta through August 20.

Concurrent with his residency, Diop came across The Image of the Black in Western Art, a seminal book series launched in the 1960s as one of the first systematic investigations into how people of African descent were perceived and represented within the tradition of European art. Inspired by the images, particularly by late Renaissance, Baroque and early Romantic portraits of once-renowned (but, in many cases, now all but forgotten) men of African descent, Diop recreated the paintings as detailed, lushly colorful photographic prints. In each image, the artist costumes himself and poses as the subject, often backed by or draped in vibrantly patterned African cloth and holding, anachronistically, modern soccer equipment.

In his most well-known previous set of photographs, the 2013 series [re-]Mixing Hollywood, created in collaboration with Senegal-based artist Antoine Tempe, Diop reimagined iconic Hollywood films such as The Matrix, Breakfast at Tiffany’s and Thelma and Louise as if they had been conceived and created in Africa, replacing the white stars with black models and the American locations with African ones. Project Diaspora treads a parallel path, though its point of arrival seems more hauntingly evocative, its mood more radioactively inconclusive and its engagement with a brutal past more complicated.

Diop emulates both the look and spirit of historic European portraiture in his photographs, especially in the rapt attention to the pattern and texture of fabric that gives, then as now, each image a sense of vividness, tactility, presence and immediacy. But this is often counteracted by a sense of distance, a silent, mysterious, aristocratic remove in the subject. In the tradition of European portraiture, painting a subject’s image was an act of veneration; there’s often an unsettled (and occasionally unsettling) sense of drama between the image’s immediacy — the opulent clothes, the lifelike gaze and so on — and the subject’s unbridgeable separation from the viewer. What’s most striking about Diop’s photographs is a similar drama between immediacy and distance.

Diop has a background in fashion photography (the quick success of his first photographic series Fashion 2112, le Futur du Beau convinced him to leave his corporate job to pursue photography full time, and his singular images, often featuring African models and vibrant traditional textiles, have been featured in countless art and design publications including Artsy, Afropunk, Vogue, Le Monde, Portfolio, Architectural Digest and the New York Times Style section). So the emphasis on fabric here is unsurprising, especially given that in Senegal, as in many places throughout the African diaspora, garments and their patterns are often used as a sort of visual language. Cloth is traditionally woven or dyed in specific patterns for births, for weddings, for funerals; a garment can indicate where a person is from or can show one’s marital or societal status or one’s allegiance to a particular region, village or tribe. It’s a language that, in spite of its visibility and primacy in the photographs, remains all but inscrutable to most Western viewers. With vividly evoked objects and a silently gazing human subject, the photographs attain an even greater sense of quiet mystery as the artist’s diffident visage remains eerily consistent across the changing settings and representations.

One of the most visible, remunerated and celebrated positions people of African descent can attain in contemporary Europe is that of player for a major soccer team. Players are honored as celebrities, even venerated as near-deities, but paradoxically, they still must often endure bigoted chants, crude fans throwing bananas onto the field when a play is botched and innocuous game talk, which can quickly turn racist when the subject of an African player’s capacities or deficiencies comes up. People of African descent who are celebrated in Europe, as in the centuries-old portraits, still occupy a singular position. They have a foot in both worlds: empowered and colonized, accomplished and denigrated, honored and insulted. Perhaps it’s a sense of divided identity that Diop shares as both an African and a son from a well-to-do family in the cosmopolitan, multicultural city of Dakar, moving frequently between Europe and his native continent. 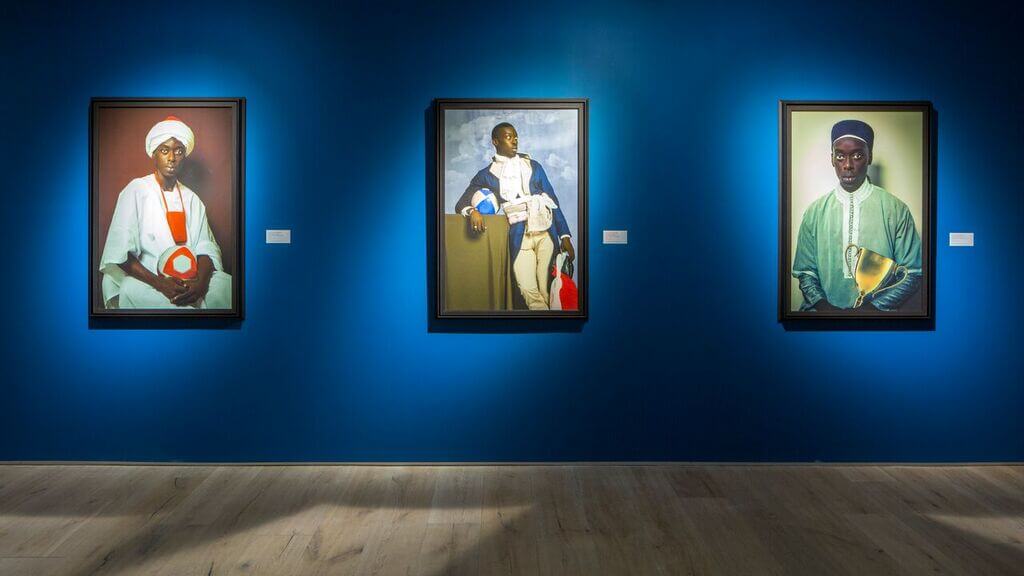 In Diop’s vision, Don Miguel de Castro, a 17th-century emissary from Congo, wears goalie gloves; abolitionist Frederick Douglass prepares to blow on a referee’s whistle; Diego Velasquez’s assistant Juan de Pareja, famously painted by the artist in 1650, clutches a pair of soccer cleats; and St. Benedict of Palermo holds aloft not the golden orb and cross of the Catholic church, but a gilt soccer ball. It’s a seemingly incongruous touch, but for Diop the natural parallel lies in the position that Africans still occupy in contemporary European society.

There’s a playful whimsy to Diop’s dressing up for the camera that makes for a provocative pairing with his solemn themes and the enigmatic stillness inherent to traditional European portraiture; it’s all somewhat reminiscent of Cindy Sherman’s famous images in mood and method. But the artist has insisted that the images are not “self-portraits” in the usual sense, and though such a claim would normally sound like a bit of a cop-out, here it convinces. The artist may occupy the center of the frame, but exploration and revelation of aspects of his own individual persona are seemingly not the goal. Diop answers the viewer’s wandering gaze with the intense, fixed and hypnotically captivating stare of someone else. We look, a person from history looks back, establishing a new link to a resurrected past.

The premises of our consideration can often be bound by long-standing gaps. Diop seeks to bridge them. His quiet gaze signifies a personal odyssey into the past, but moreover, it’s also an invitation to begin our own journey, to step with him into a more nuanced understanding of shared history and entwined identities.