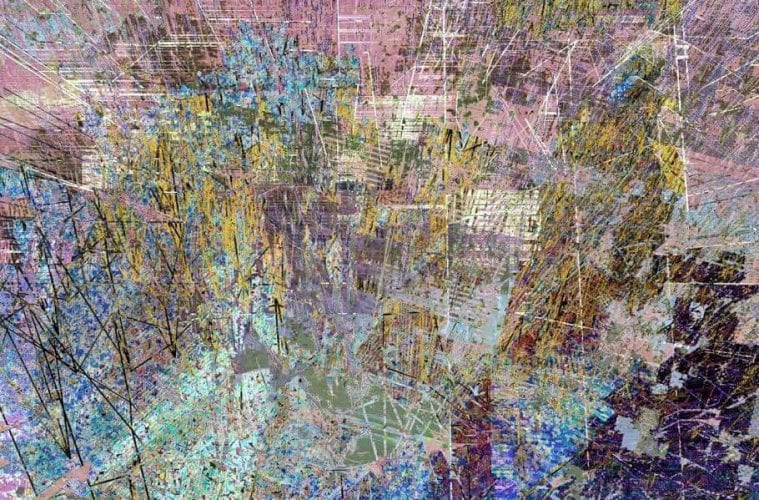 Review: Spencer Sloan’s “Celebrity Candids” is an exhibition without failures

Spencer Sloan’s computer-manipulated digital photographs in Celebrity Candids, at Spalding Nix Fine Art through April 15, are a survey of the most recent of his single-copy editions of painterly digital productions deriving from celebrity photographs found online. Sloan transforms these originals with multiple photo-manipulation programs, some of them commonplace apps found on most people’s smartphones. Others are less familiar; the partial list Sloan provided includes Decim8, Glitch Lab, Pixel is Data, Time Piles, DataBender, PixiVisor and, of course, Photoshop.

Sufficiently interested visitors can ask to see some of Sloan’s earliest versions of this process, dating from 2012, which are on the premises but not part of the exhibition. Printed in watercolor-like pastels on paper, rather than in vivid palettes produced from immense digital files and mounted to Plexiglas, they form an instructive contrast to the work from 2015 to the present that appears on the gallery walls. Deeply committed fans of Sloan’s process can also view the images that led Sloan to his moment of inspiration, but for that, they’ll have to wait until May 6 for an exhibition at Parlor Gallery featuring the photographs in which Sloan captured the accidental onscreen distortions and pixelations of Charlie Sheen’s notorious February 28, 2011, emotional meltdown on Piers Morgan Tonight.

Capturing this unintended visual commentary on celebrity conduct led Sloan to contemplate how deliberate distortion through photo manipulation programs might be used to create a different commentary on celebrity culture. Accordingly, he took to turning the most banal type of photograph — celebrity snapshots taken by paparazzi — into digital versions of abstract paintings in which the original photograph had long since been subsumed into splashes of color, tightly defined parallel lines or blocks of geometric figures.

Beginning with the highest resolution paparazzi photographs of celebrities that he can locate, Sloan filters them through hundreds of iterations in multiple programs before layering the results into such programs as Photoshop. The automated filters of the earlier programs produce unpredictable effects, although Sloan has now learned the most likely outcomes. The combinations of particular layers and the manipulation of them are his personal intervention into a process governed by algorithms originally intended to create more mundane photographic effects.

The resulting prints resemble various styles of contemporary painting, although Sloan acknowledges only general art historical precursors in his personal associations regarding the finished product — Cubist portraiture, for example.

What the viewer brings to the experience can result in different intuitions of family resemblance — for example, I see echoes of James Rosenquist’s glossy Pop sensibility in the satiny ribbons of Kylie Jenner – Wearing a mini-skirt out in LA 12/18/13 (2017). This newly introduced effect is entirely Sloan’s conscious aesthetic choice rather than the inevitable outcome of anything in the photograph or the photo-manipulation program. (I should note here that Sloan titles his works after the caption of the original online digital file that he manipulates, which leads many viewers to look for an identifiable subject matter that isn’t there any longer.)

The two images adjacent to this one demonstrate definitively (not that it was needed) that the original photograph bears minimal or no responsibility for the appearance of the final artwork. Kylie Jenner – out in LA 10/20/13, II (2017) is a subtle blend of greens and complementary colors, with soft-focus diagonals a predominant element. Kylie Jenner – out in LA 10/20/13, I (2017) is a much sharper study in predominantly red polygons that reminds me, at least, of the Russian constructivism of Liubov Popova. The astonishing range of styles in this exhibition, all of them recognizably united by some hard to define visual sensibility, demonstrate that even when the outcome was not fully under Sloan’s control (more so in earlier works than in the most recent ones), the works were held together by the decision Sloan made as to when a work was worthy of being produced as a physical object. There are no failures in this exhibition.

There are, on the other hand, works that feel more resolved than others. I personally have difficulty with the newly introduced larger digital images (for example, what I am calling the Rosenquist ribbons, although that is an unfair shorthand), but other people will doubtless find this the most exciting aspect of the entire show. Instead, I am much more impressed with Sloan’s ability to handle what must be literally thousands of small overlapping details in a work like Lindsay Lohan – attends Lonneke Engel and Valentina Zelyaeva Organize Your Life Annual Holiday Party at the Time Warner Building in New York – 12/14/12 (2017). (It may or may not be a happy accident that the title is as hilariously long as the work is stunningly large — 60 by 40 inches, over twice the size of most of the pieces in the exhibition.)

Sloan has an elegant explanation for why the single-copy edition of each work parallels the singling out of one image from the hundreds that paparazzi shoot in the course of a single celebrity encounter, but I prefer to think of it as paying homage to his origins as a painter. (It also solves the twin problems of how to limit a photographic edition and the fact that producing his particular type of mounted photograph can become prohibitively expensive.)

Such questions  as the unique object vs. the almost infinitely replicable digitally produced object, the status of computer-produced digital copies without real-world originals elsewhere, and the place of the artist’s choice and consciousness in a process mostly determined by algorithms are only a few of the points of contention that have barely begun to find clear definition, even after years of discussion.