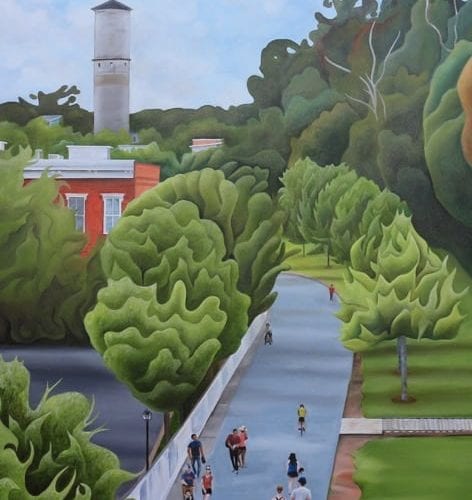 When Emma Knight‘s solo exhibition, Walking the ATL, opens at Brickworks Gallery just off the Atlanta BeltLine on June 2, the Virginia-based painter hopes to shine a light on the joys of exploring Atlanta by foot. She estimates having walked about 20 miles over one weekend while visiting Atlanta last fall with her camera at the ready. 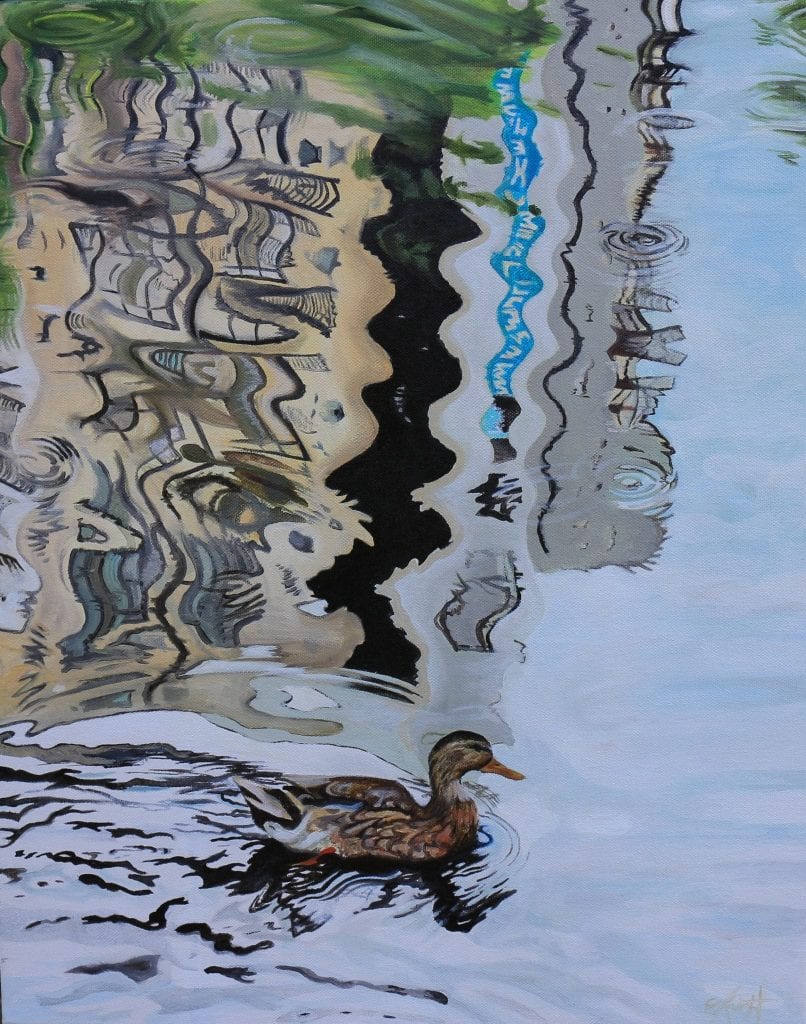 “Something snaps,” she says about photographing iconic landmarks like Manuel’s Tavern, Ponce City Market or Ebenezer Baptist Church that beg to be painted as soon as she returns to her studio. Once there, she maps out an image in a sketchbook, “distorting reality if necessary,” as she puts it, to make the composition better. She does a quick underpainting with acrylics then adds layers of oil paint to increase the depth and enrich her colors.

“I am a romantic, and I love fairy tales,” she says. “So I guess that informs the way I see things. And I love doing trees. There’s something very elegant, even a little spooky, about a bare limb. By the same token, there is nothing more beautiful than the combination of voluminous shapes in tandem with very sharp, thin lines.”

Making peace with her aesthetic did not come easily to Knight. She claims her paintings pretty much look the same today as they did when she was a kid growing up in Richmond and spending summers in the English countryside where her mother was born. She admires artists who tackle social issues in their work and used to beat herself up for not turning out edgier paintings. But time and experience have softened the critical voice inside her head. 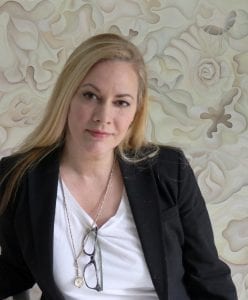 “Everyone has their own buildup of experiences that informs their mark-making,” she says. “I’m not sure my paintings would look the way they do if I was raised in the Midwest or New England or the West Coast. But I recently decided to go with the simplicity of mine because I am what I am, so I might as well stick to the marks that come naturally.”

After graduating from Mary Washington College in Fredericksburg, Knight relocated to Savannah, keeping up her painting practice while juggling a series of day jobs to pay the rent. She sold cosmetics at Macy’s, where hours logged as a makeup artist allowed her to study faces closely and experiment with using color to contour and camouflage.

“Doing makeup all day was not the most life-enriching experience,” she admits, “but I decided to make the best of a not-so-great career situation. . . . I have always thought how odd it is that when you look at something considered beautiful closely, it is often pretty grotesque, and vice versa. Things aren’t always what they appear to be on the surface once you make an effort to see a little deeper.” 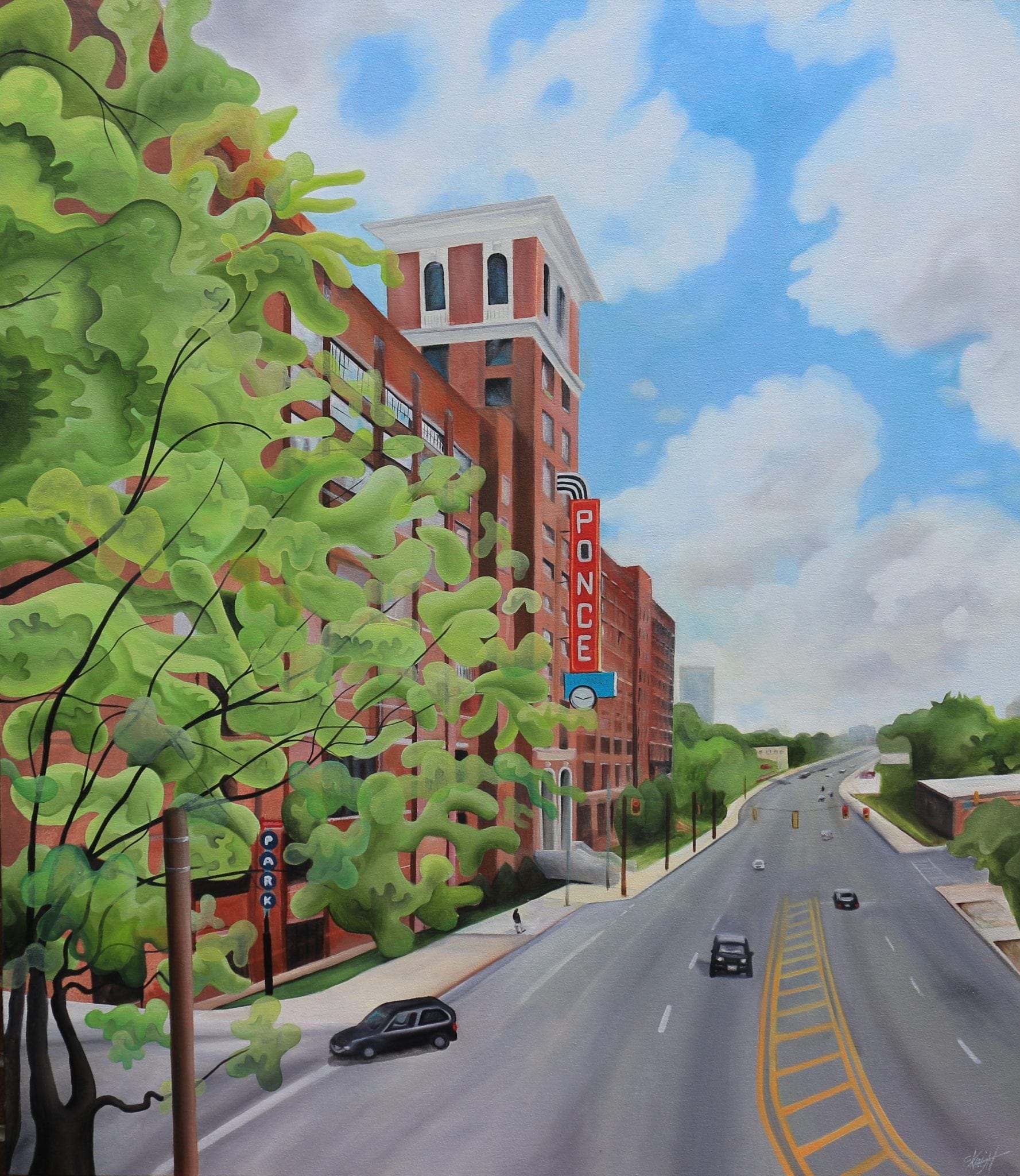 She mixes her colors directly on the canvas owing to her impatience when inspiration strikes. And she is a minimalist, not only in terms of limiting how many colors she’ll use on a single canvas, but in terms of her willingness to sacrifice the little picture in favor of making a big impact.

“When I first started painting, I really liked the idea of digging deep and simplifying things,” she says. “Ever since, I’ve been working at introducing details without distracting from my overall composition. When I see a landscape with lots of different colors, for example, I’ve learned that going into each detail can be too much. But if I gradually add the hint of another color, then grade it back to another color, it honors the scene without overwhelming the viewer.”

Experience has taught Knight to welcome the hiccups that come with the territory. The struggle with any canvas always leads to a solution, which she says invariably winds up being the strongest part of her paintings. Moreover, those solutions tend to figure into subsequent paintings, which she says has helped her to evolve as an artist and cultivate a voice that is uniquely her own.

“I think authenticity comes with age,” she says. “I think you realize there’s nothing wrong with being plain and simple. There’s beauty in just painting a happy little picture of a tree and having it stand on its own without apology.”

Walking the ATL opens with a reception on June 2 at 6 p.m. and runs through August 31 at Brickworks Gallery.