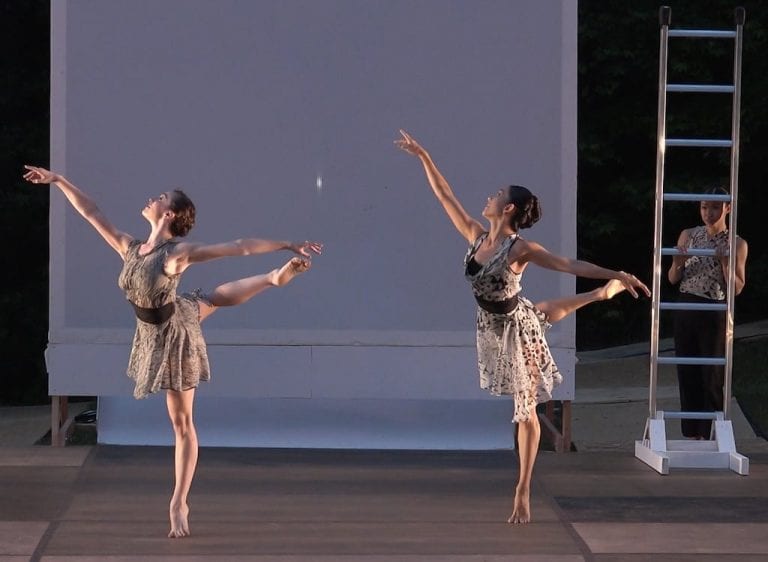 About a year ago, the five founding artists of Terminus Modern Ballet Theatre left the security of Atlanta Ballet and set out to form their own company, intent on realizing a distinct artistic vision. They aimed to develop a dance language that was borne of their shared experiences as classically trained dancers, nurtured in an open, collaborative environment. They were well-versed in styles ranging from the theatrical storytelling of British ballet to European contemporary blends of ballet and modern dance to Israeli choreographer Ohad Naharin’s newer Gaga movement language.

In Saturday evening’s world premiere of The Vertical, choreographed by Tara Lee, a cast of seven dancers revealed a poetically beautiful, richly inventive, deeply sourced expression that revitalizes the language of ballet while telling a story involving human relationships in various stages of life.

Lee’s vision for The Vertical (continuing through June 3) starts with the principle of the plumb line, found by hanging a string from the ceiling with a weight attached to its base. This defines a true vertical line, and dancers often use this idea as a reference line for orienting themselves in space and with the pull of gravity. Lee saw the vertical line as a metaphor for the fundamental truth that each individual carries throughout various stages of life, which played out in her ballet as Lee watched from the top rungs of a ladder.

“The movie of our life involves love, death, loss, searching, responsibility, celebration,” Lee wrote in a program note. “So the question is, how much can we enjoy the movie while we’re still in it?”

There was a sense of anticipation and a bit of suspense, as Friday’s scheduled premiere outdoors at Serenbe’s Deer Hollow was rained out halfway through the performance due to an approaching subtropical storm. The preceding week’s intermittent rainfall had given the troupe little time to build the stage setting — a broad, grey-topped platform with three white panels in back and a ladder standing vertically between the audience right and center panels. A dusky sky, hillside meadow and surrounding forest created a larger frame for her work.

As cooling air dissipated the humidity, the new ballet unspooled with a sense of personal sharing and intimacy, from the curtain talks by Terminus founding donor James Weis, followed by John Welker, the company’s founding director, to the images of Welker’s five-year-old son Lucas projected onto the screens later as the child watched from the front row. The performance itself was the company’s first full runthrough at Serenbe due to the weather, but no one would have known it because the dancers share a common artistic history that has built a strong rapport.

A brass band version of “When the Saints Go Marching In” evoked a New Orleans jazz funeral. Music shifted to an instrumental piece, its chords suggesting distance and possibly danger, its rhythm marked by a sense of weight and propulsion. Christian Clark led a line of dancers who advanced into the space, reaching out with hands clasped in front of the body as if divining for water, or venturing perhaps into a virtual space crowded with memories. As Ben Rawson’s golden light rose from either side of the stage, dancers burst like fireflies into momentary arabesques. Circular momentum drove dancers across the space, their limbs sweeping in gentle curves.

Tara Lee’s voice-over asked, “What if we could fast forward to the end of our life, so that we could look back on our life?”

Lee watched from the ladder’s top rungs as Rachel Van Buskirk danced a smooth and intricate solo. She circled one arm behind her, as if turning back the hand of a clock, even as her opposite leg brushed upward in the opposite direction. She folded an arm around her head, passed her forearm in front of her face and then looked through it as if gazing through a portal.

A funeral scene unfolded — a community gathered in voices that said, “She was my mother,”  “She was my wife,”  “She was me.” To an urgently undulating piano melody, Lee watched as individuals advanced and receded into the group. They reached out then collapsed in grief as others caught them.

After a haunting portion of “Moon River” (by Henry Mancini and Savannah native Johnny Mercer), a swish of wind revealed Heath Gill and Devon Joslin side by side, cradling a baby in their arms. Costumed by Tamara Cobus in a black and white vertically striped shirt and black trousers, Gill danced a comical solo to Johnny Richards and Carolyn Leigh’s “Young at Heart.” He made silly faces, tripped himself and made a play of puppetry as if having a child had brought out the mischievous boy within the man.

Later, an hourglass with sand falling through its narrow center appeared on the center back panel, part of a series of film projections by Mitch Stark. Gill and Clark circled the stage with childlike innocence, their relationship both competitive and slapstick, evoking perhaps sibling rivalry and generating giggles from Welker’s and Clark’s young sons in the audience.

Van Buskirk later appeared in a duet with Clark, showing a further extension of their miraculous partnering in last fall’s exstasis. True to the John McFall lineage, Lee’s choreography for this pas de deux felt especially inspired as the two moved seamlessly through unusual pathways, changing levels and incorporating a sense of weight and variation of line that imbued their classical dancing with freshness and spontaneity.

There’s an inimitable feeling you get from the audience, watching a group of capable, inspired and courageous artists forge their own path to carve out a niche in the community while also advancing the art form. Then there’s the personal warmth — the palpable sense of commitment to one another that felt like the return of a long-absent loved one.

Indeed, the dynamic sweep of movement showed Lee and the Terminus dancers are developing an original voice and style — a language that draws from the wealth of their experience and seeks to synthesize its fundamental values and the breadth of its expressiveness. There is depth and thoughtfulness behind the work — multilayered storytelling that is philosophically based and accessible. Appealing and well-composed with a Southern Appalachian flavor, The Vertical is not to be missed for those who want to witness a rare happening in this region — inspired new work performed at a high level of professional excellence, not imported, but developed right here as a unique expression of our place and time.