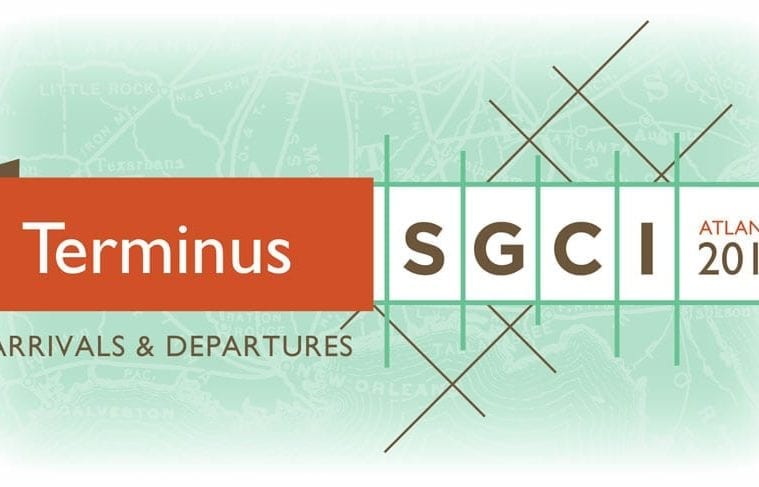 When the SGC International Conference opens in Atlanta this week, it will showcase an ancient art form that is as ubiquitous as it is overlooked.

According to Valerie Dibble, a founding member of the Atlanta Printmakers Studio and professor at Kennesaw State University (KSU), “printmaking began when the first caveman put his hand in the ash from a fire, or juice from a berry, and put in on a wall.”

As imaginations and technology evolved over time, the results have been everything from elegant engravings on banknotes, to utilitarian rubber stamps, to silk screen tee shirts. Andy Warhol’s repetitive graphics gave the process its 15 minutes of fame in the 1960s. Half a century later, 3D printing has taken the medium to new heights. “The difference between a poster and a print to a person who isn’t paying attention might not be apparent,” says Robert Brown, who chairs the Printmaking department at Savannah College of Art and Design (SCAD). “But the fine art process of printmaking is as vital as painting or sculpture. Once you understand how much the hand of an artist goes into an original print versus a reproduction, it’s easy to appreciate their value and uniqueness.”

The means of transferring an original rendering from an inked surface to an unmarked one can be accomplished via woodcut, engraving, etching, mezzotint, aquatint, drypoint, lithography, screen printing, monotype, monoprint and digital prints. If a beloved scene from Forrest Gump comes to mind when contemplating that list, it’s for good reason: Atlanta’s printmakers are as committed to getting their hands dirty as Bubba was about sharing his favorite shrimp recipes with anyone who would listen.

“We are more than willing to inform people who don’t know anything about printmaking,” says Dibble. But as an SCGI steering committee member, she can’t wait for the chance to cross-pollinate with a robust community of about 1,200 printmakers who will converge on the city over a five-day period from March 15 to March 19. “Artists tend to be isolated on our own campuses or in our studios, so I’m really excited by the opportunity to gather together, share knowledge and enjoy camaraderie with visitors from other parts of the States, Dubai, England and Canada.”

The High Museum of Art will host an opening exhibit and reception on Wednesday night. Partnering schools, including SCAD, KSU and Georgia State University, will offer a series of keynote addresses, panel discussions, demonstrations and special exhibitions. Graduate and undergraduate printmaking students have been invited to display their portfolios in an open forum at the Loews Hotel in Midtown.

Like a mini art fair, the gatherings are intended not only to inform but to help working artists, scholars, students, professors, museums and galleries network to advance their academic, career and cultural goals.

“The conference gives us a chance to show off how vibrant Atlanta’s arts community is,” says  Terri Dilling, an Atlanta-based artist and Board member of the Atlanta Printmakers Studio. “This will be good for our reputation as a contemporary art city.”

It also promises to be a lot of fun.

Friday’s Print Big! demonstration on Gilmer Street Southeast, in front of the GSU School of Art and Design, will feature 4’ x 8’ woodblocks — carved and designed by Georgia-based artists, community organizations, and college, university and high school students — to be printed with a steamroller. On Saturday, a complimentary exhibit at the Hudgens Center, titled The Best of PRINT BIG!, will feature more than 20 of the steamroller prints created over the past seven years. An international juried printmaking exhibit organized by Atlanta Printmakers Studio, titled The Atlanta Print Biennial, will be hosted by Kai Lin Art. Highlights include works by Art Werger, a master of intaglio.

“Intaglio is a reductive printing process that uses an etched copper plate,” says Lin. “It’s the same process used to print US currency and is one of the most difficult processes in printmaking. Most people don’t even touch it because there is such a narrow margin of error. Once you make a mark, you can’t walk back from it.”

“Nothing I do as an artist is anything but immediate,” says Schwartz, who is also a clinical psychologist with a psychoanalytic psychotherapy practice in Atlanta. “It has to lend itself to impulsive behavior.”

As a printmaker, she is interested in the degradation of images over time. Everyday muses include advertising, graphics and scenes that repeat daily life. Her biggest influences are Robert Rauschenberg and Willem de Kooning. And she is so preoccupied with hipster coffee house culture that she says, “two of my pieces, Cappuccino and Latté, were inspired watching baristas pouring those designs on the top of my daily latté at Octane.”

Prizes to recognize Lifetime Achievement, Professor Emeritus and Excellence in Teaching among printmakers will cap off the Conference. And a cash prize and exhibit will be granted to two students who show extraordinary promise as printmakers.

Awards notwithstanding, however, Brown is more focused on the rewards his students stand to reap by merely showing up for any of the 30 print-related shows, opportunities for mentorship, print exchanges and lectures this week.

“I’m really excited to see the engaged community,” he says. “As an individual, you only know the things you are engrossed in. But as a group, you can really expand and explore interesting avenues in the dialogue of fine art.”