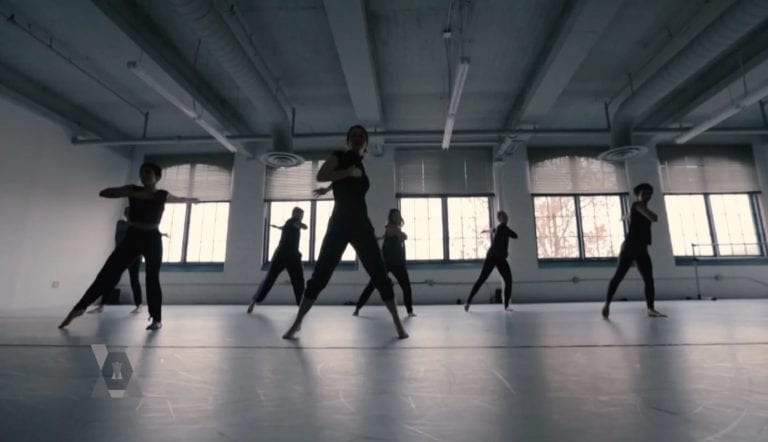 Editor’s Note: This story is the third installment of four articles written in commemoration of the 2017 ArtsATL Luminary Awards, our commemoration of the passionate, creative and innovative spirit of Atlanta’s arts community. Lucky Penny is the recipient of the Kindle Award for Innovative Practice — given to artists, organizations or individuals who have helped foster growth in our arts community with their intrepid approach to their work. Learn more information about the Luminary Awards here.

Melissa Word is a dancer. When she performs, the long lines of her body might roll in soft waves or whip around feverishly. Sometimes her limbs bend like a doll’s in all directions. Other times they hang heavily. It depends on the choreography. And Word’s choreography, in part, depends on her access to a few simple things: a clean open space with room to move freely; time in that space to create without expectation; and other dancers, people who are also experimenting with the language of the body. But meeting those seemingly simple needs is difficult. Adequate rehearsal space is scarce and expensive, a reality that discourages regular practice and stifles creativity.

The Lucky Penny is an experimental performance outfit in Atlanta. Its cofounders, dancer/choreographer Blake Beckham and designer Malina Jo Rodriguez, founded the organization in 2011 to build community and present innovative work. Beckham, who by then had been creating and performing in Atlanta for more than a decade, felt so isolated and disconnected from the work of her peers that she was ready to leave Atlanta — and dance — altogether.

Instead, Beckham and Rodriguez planted a flag with the Lucky Penny and invited dancers operating outside traditional institutional practice to gather around it. The organization became a point of genesis for bold ideas. 2011’s PLOT was a site-specific work built around their Dance Truck program and set among the Goat Farm’s overgrown ruins. For 2012’s Threshold, the Lucky Penny collaborated with celebrated architects Mack Scogin and Merrill Elam to construct by hand a structurally sound two-story cardboard house. And then performed in it.

Producing such ambitious works requires time and space, resources that are fundamental yet exceptionally limited and offered at a premium in Atlanta. Frustrated working hour by hour and project by project, Beckham and Rodriguez imagined a physical place to provide contemporary performers with consistent time, space and community for their creative practice. Their idea became a reality in July 2015. The aptly named Work Room occupies 1,700 square feet of the Wagon Works, a 19th-century former wagon mill in East Point. It is a dreamy space with high ceilings, large arched windows full of soft light and a sprung dance floor. The Lucky Penny offers the studio at an affordable price to its resident and visiting artists thanks to a three-year reduced-rate lease. Most Atlanta dance studios cost around $40 per hour. The Work Room charges a monthly fee. The cost to resident artists, who have year-round access and spend six to 15 hours a week in the space, works out to about $5 per hour.

“We’re trying to create some kind of scaffolding for all of those independent artists that are not tethered to an institution,” Beckham says. “We are making steps to create a little bit of structure around the independent artist community so that the careers of these artists can advance. Because without that, without some kind of latticework or network around them, they won’t be able to continue.”

In the year and a half since the Work Room opened, its artists have created more than 45 original projects in Atlanta. That means not only is the city flush with more dance, but also with the economies that follow: dancers to perform the works and venues to house them, technicians to rig lighting and build sets, audiences paying to watch. Work Room artists such as Word, Beckham, Phillips, and others are able to produce with such urgency because of the regular, sustained practice the Work Room makes possible.

“The Work Room immediately changed my sense of intention, my optimism about being an artist in Atlanta, my commitment to my craft, the feeling of possibility,” Beckham says. “There is a space held for you, there’s a community that cares when you show up.”

In January, the Work Room revealed its alter ego, Show Room, a stab at addressing Atlanta dance’s other big problem: dedicated performance space. In all of these efforts, Beckham and Rodriguez have displayed uncompromising dedication to their artists and craft, and the guts to pursue what they know is necessary.

A FOCUS ON PROCESS

Feet pad across the Work Room’s gray floor, their muffled movement a prologue. Bodies assemble on benches. The lights dim. Moments later, Word’s toes are curled and inching her quickly sideways. Her shadow grows and shrinks on the wall as she navigates the Work Room’s long expanse for Palisade, one of two works that ushered in the studio’s new era as a rehearsal-slash-performance space in early January. Palisade addressed the attitudes and expectations that shape us from our earliest moments. At one point Word began chanting the phrase, “You can be anything you want to be,” each time repeating the mantra with a different inflection — hope, confidence, doubt, defiance. It turned into a call and response. “Yes. No. Yes. No. Yes. No. Yes. No,” she debated as she thrashed on the floor, wrestling with herself like Jekyll and Hyde. “No. No. No. No. No. No.”

Fails, the other performance that inaugural evening, came from Beckham and Hez Stalcup. Vaudevillian at times, the work explored the awkwardness, humor, disappointment and humiliation of not meeting expectations. In the Show Room’s intimate atmosphere, the audience came face-to-face with the dancers’ intense physicality: knees crashing on the floor, backs slamming against walls, limbs flailing with calculated recklessness — the sweat, the heavy breathing, the visceral power of bodies.

“There are so few things in this world and in our culture anymore that ask for our attention that way. It calls us back in time and to our own bodies. Using the body for language and communications is a very primal thing,” Phillips says.

In her work as a dancer and choreographer, Beckham is fixated on this physical mode of communication we all share, on the purpose of experimental dance and the conversations she and her Work Room collaborators are contributing to the world with it.

“I feel like what we are doing is cultivating this radical sensitivity in the body. Learning how to be more present with each other. Learning about resistance, learning about emancipation . . . . Holding a space for people to be able to do that, and be fiercely present and honest with each other. [To] ask these really difficult questions and engage with work that is truly experimental in nature . . . . That feels so important right now. It just feels like the most important thing,” she says.

The Work Room offers space where physical and creative limits can be explored safely to deepen artists’ practice (goodbye dark basements and cold concrete warehouses-cum-rehearsal spaces). Palisade evolved out of another piece that Word performed last year for the Work Room showcase Heads Up.

“I really teased out and pushed and expanded the original ideas I was working with,” Word says.

The Work Room allows the artists to focus on process rather than product. Beckham, for instance, is learning to simplify. While she loves the ambitious performances she’s presented over the last few years with the Lucky Penny, producing works of such size and scope meant she was only in front of audiences once every year or two. Thanks to the Work Room, she’s becoming more nimble. Production for Fails, the work she and Stalcup debuted at Show Room, essentially relies on two dancers and their retro tracksuits, so the pair is thinking of touring the work, something that’s more difficult to do with a two-story cardboard house.

The Work Room’s functions extend beyond practice space and include dance classes, professional development and exposure to artists from other cities and states. There are workshops on production, design and grant writing. (Word and fellow Work Room artist Bella Dorado were recently awarded Idea Capital grants.) Beckham, who has degrees in dance and English from Emory and an MFA in dance from Ohio State University, teaches free weekly dance classes at the Work Room. Local and national artists teach free master classes. There are paid performance opportunities, such as Work Room’s annual showcase Heads Up, and access to a supportive community.

Visiting artists — two a year for a week each — also share their expertise with Work Room residents. Tahni Holt, who graduated from NYU’s Tisch School of the Arts and has had residencies around the world, including France, Greece, Anchorage, Alaska, and now Atlanta, is one of these visiting artists. Holt is also the founder/director of FLOCK, a Portland dance space similar in spirit to the Work Room.

“[These kinds of spaces] are happening more and more and they’re all artist led. I think that’s the most important aspect. They’re all people who are artists and know what artists need and know what isn’t happening in their community,” she says.

“I am a true believer that the cross pollination of ideas is so important to our field, which is an experimental field and one that really relies on the exchange of ideas and processes,” Krodman says. “This model of being able to be a center for the dance community and for the creative community of Atlanta, that really puts them on the map in a unique way. And Atlanta just didn’t have that before.”

And this is exactly the point. “We want presenters to come here and see work, to know that Atlanta is open for presenters producing festivals in other cities and states. Don’t overlook us,” Rodriguez says.

AN INCENTIVE TO STAY

The art world has numerous programs that deliver resources and opportunities for a year or two to so-called emerging artists before swapping them out for the next group of up-and-comers. Such opportunities provide a welcome and necessary service to early career artists. But Beckham and Rodriguez have a different approach: the Work Room does not decide when artists leave, the artists do.

“Consistency is the thing,” Beckham says. “If we were to ask any of the artists to exit the program, they would have nowhere to go. . . . I knew from the very beginning that the artists can choose to leave the program, but I’m not really looking to kick anybody out.”

Their model, as simple as it seems in concept, has proved revolutionary both to its resident artists and to those in its orbit. Dancers, choreographers and performers from around the country are asking how Beckham and Rodriguez built the Work Room in the hopes of establishing their own versions. The National Endowment for the Arts acknowledged the creative, cultural and socioeconomic hurdles the Work Room addresses in a report released last fall called “Creativity Connects.” In it, the NEA explained what Beckham and her peers have known all along: “Increasingly, funding entities and presenters of all kinds seek measurable outcomes and reliable results, and focus on specific projects rather than investing in the long-term development of an artist’s ideas and body of work. . . . [T]hese trends discourage artistic exploration and the long-term development of artistic ideas, and do not take into account the fact that intermediate ‘failures’ are essential to artistic innovation and long-term success.”

Beckham and Rodriguez aren’t surprised that the Work Room is succeeding. They know what dancers need because they live it. But that doesn’t mean it’s been easy or that the future is certain. It’s a constant struggle for resources, but “that sacrifice doesn’t have to be so painful all the time for practicing artists,” she says.

So she and Rodriguez keep at it, creating rehearsal space where there was none and now turning their attention to the need for performance venues with Show Room.