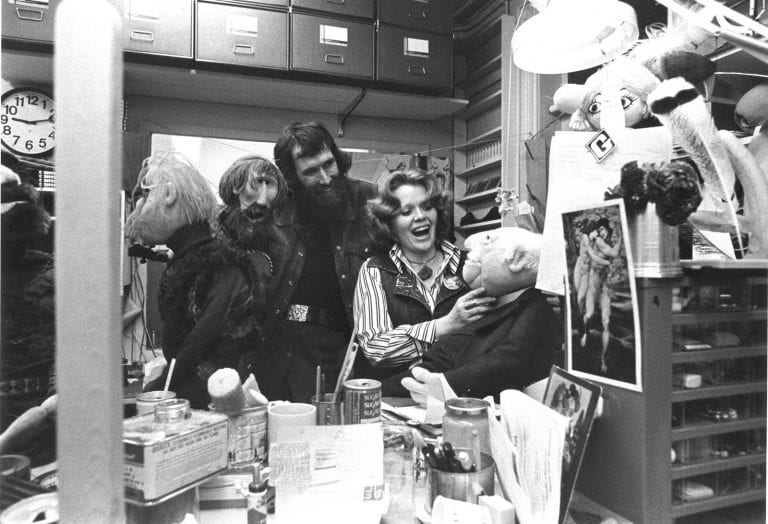 Miss Piggy’s creator, Bonnie Erickson, speaks about her work as a woman of The Muppets

The Center for Puppetry Arts marks the beginning of Women’s History Month with the panel event The Women of The Muppets on Saturday, March 3, honoring some of the original female creators, puppeteers and actresses who helped bring Jim Henson’s Muppets to life. The panel features Sonia Manzano, who played Maria on Sesame Street; Fran Brill, the first female puppeteer hired on the program; and Bonnie Erickson, the designer and builder behind some of the most famous Muppets.

In advance of the event, ArtsATL reached out to Erickson at her home in Brooklyn Heights, New York, to discuss her work as a female creator in the Muppet Workshop and to learn more about the origins of her most famous female creation, Miss Piggy.

ArtsATL: Novelists are frequently accused of basing their fictional characters on real life people. Did you face the same occupational hazard as a puppeteer?

Erickson: A lot of people have asked who I based Miss Piggy on, but it wasn’t a person. She was based on my recollections of the pigs on my uncle’s farm in Minnesota where I spent summers as a child. My mother was a big fan of Peggy Lee’s, and they were both from North Dakota, so when I created the pig I thought Piggy Lee would be a wonderful homage to the singer. Eventually, when we started to use Miss Piggy a little more, the legal department decided her name might not be considered a compliment, and it was shortened to Miss Piggy. Gato Barbieri was the inspiration for the character Zoot in the fictional Muppet band Dr. Teeth and The Electric Mayhem. And the two grumpy old men, Statler and Waldorf, were inspired by after-hours cab rides past the Yale Club in New York. During those late night drive-bys, I saw huge portraits on the wall and over-stuffed chairs inside the club. I could just picture these two guys sitting there in their club, so I made a sketch and gave it to Jim. One year later, he found a place for them in one of his TV specials.

ArtsATL: When you first imagined Miss Piggy, was she just a little pig on a farm? Or did you know a star was born?

Erickson: I didn’t know Miss Piggy was going to be a star, but she did. She was created as one of three pigs having an adventure in outer space, so she started out with small eyes and was wearing a spacesuit. We were ready to tape her when Jim got a call from Herb Alpert [who wanted Henson’s Muppets to make a cameo on one of his specials], who needed a female pig that was a diva. I quickly went to the eye drawer and got a big pair of eyes with eyelashes, threw some satin on for the dress, added pearls [to hide the seam that connected Miss Piggy’s head to her body] and made the gloves because I didn’t have time to sculpt real hands.

ArtsATL: Details matter when building a puppet or costumes. What are some of the details that went into Miss Piggy that you’re most proud of today?

Erickson: I’m most proud of the fact that I was able to contribute to Miss Piggy’s image as a fashion icon, and that her appeal has been so long-lasting. If you look back to the early days of The Muppet Show, you will see that she started out relatively simple. She was just a chorus girl who wore her chorus girl outfits. But she graduated, thanks to Frank Oz, who really developed her personality and gave her a reason to be, from the karate chop to the comedic hair.

ArtsATL: Would you say Miss Piggy is a feminist icon as well as a fashion icon?

Erickson: Isn’t it interesting? She’s done by a male performer, and yet she has become a symbol for sort of brassiness and independence that women appreciate. I would hesitate to say that she’s a feminist, because I’m not sure that that’s how Miss Piggy would feel about it or read it, but I see her as that. I think a lot of women feel the same way.

ArtsATL: When you create a puppet, then hand it over to the puppeteer who will give the character life, is there any discussion? Or is it like passing a baton in a relay race?

Erickson: When we first started, the studio, performers and workshop was a pretty small group . . . so we had the luxury of working with the performers. Frank and the other puppeteers would come in and try on a puppet and offer feedback. As time went on and things grew a little busier, it was a little harder to do that on such a personal level. But the whole time we were working on The Muppet Show, we were able to work directly with the performers.

ArtsATL: You were at the eye of a storm for so many years with The Muppets and Sesame Street. At the time, did you comprehend what an enormous impact your creations had on children, their parents, collective memories and popular culture?

Erickson: Initially, we didn’t really understand that. We only knew that we were being paid to play. I think one of the huge kicks Jim got out of life was that he could enlist people to collaborate with him and realize whatever he’d envisioned. But nobody was quite prepared for the enormity or the length of time and deep commitment people started to have to his work. We were always amazed by how moving it was to talk to people who were touched by Jim and all of these worlds he created that really seemed to engage people.

ArtsATL: Your workplace was predominately male. For all the fun and camaraderie you shared with colleagues, did you ever feel like the odd one out? Or was gender a non-issue in the workshop?

Erickson: Actually, it didn’t matter. Sexism was never an issue. Before I came to work for Jim, I’d worked in theatre, where, if you were there to do the job, you were accepted and there was very little judgment or any kind of problem people might have with your gender, or your choices in any way. It was one of the luckiest and most wonderful places to work because it was inspiring . . . and everybody felt very free to contribute. 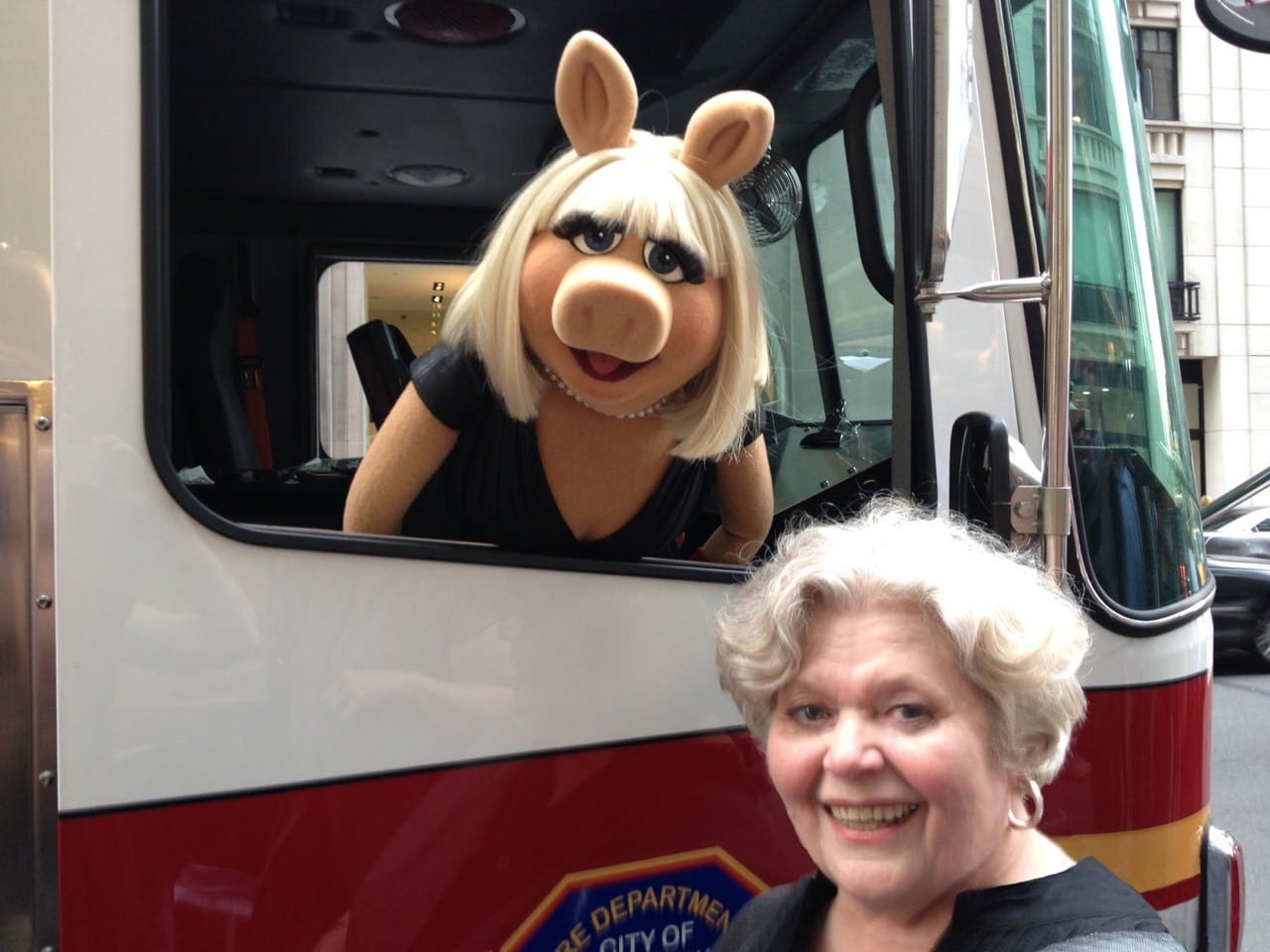 ArtsATL: It seems like puppeteers are always crammed into the most tiny, improbable spaces when the cameras roll. Did you ever get into the box with them?

Erickson: A big relief to Jim was that I was not interested in being a puppeteer. Originally, I wanted to be an artist and actor. But I got to NY and decided that acting was not for me. I just couldn’t take the pressure. And I was much more interested in the things that happened backstage, or putting together a production. When Jim needed a puppeteer for a group scene, he would call on me, but he knew it wasn’t my favorite thing to do. I must say, it was a tough, tough job.

ArtsATL: You grew up in Minnesota but felt like you were meant to have a life in New York City. Why?

Erickson: [laughs] My parents were terrific people who gave me classes in just about everything: dance, singing, music, piano and art. My biggest muse was art, and the fact that I loved to draw. Because of that, and my political leanings, I got a subscription to the Village Voice when I was still in high school. From then on, I figured New York was the place to be if I was interested in art and theatre. And I really focused on getting there.

ArtsATL: When you come to Atlanta to celebrate Women’s History Month with fellow-Women of Muppets, you’ll be sharing the stage with Sonia Manzano and Fran Brill. What would you like fans to know about them?

Erickson: These are women who have had long careers before and after Sesame Street. Sonia has written many pieces about Sesame Street, and of course her book Becoming Maria, which she will be signing at the event. Fran, whose tip led me to being hired by Jim, has had a long voiceover career, was an actress before working with Jim, and is still a stage actress today. She broke the gender barrier at Sesame Street, where all of the puppeteers were quite tall. But Fran solved the height disparity by wearing really high platform shoes to level the playing field.

ArtsATL: What do you want Atlantans to know about the Center for Puppetry Arts and its archives?

Erickson: The Center has something for everyone. It’s always been a wonderful place to see live performances by puppeteers, and their educational outreach program is incredible. Jim Henson’s work, which has tremendous nostalgic appeal for his fans, is archived in the museum section of the Center. And their global collection can fuel a day-long exploration and celebration of what puppets mean to people around the world. It’s become a real destination for people visiting the city, and should not be overlooked by Atlantans.

ArtsATL: Do you think there has been a golden age of puppetry in the United States?

Erickson: I think it’s coming! Before Jim’s work became so popular, puppetry was often thought of as just children’s entertainment. It was not regarded as a cultural art form, as it is today. But now we are seeing puppets everywhere. They are in theatre, incorporated into dance projects, and the anthropomorphizing is so convincing, we tend to take them for granted.

Bonnie Erickson appears with Sonia Manzano and Fran Brill at the Center for Puppetry Arts for the panel event The Women of The Muppets on Saturday, March 3, at 7 p.m.