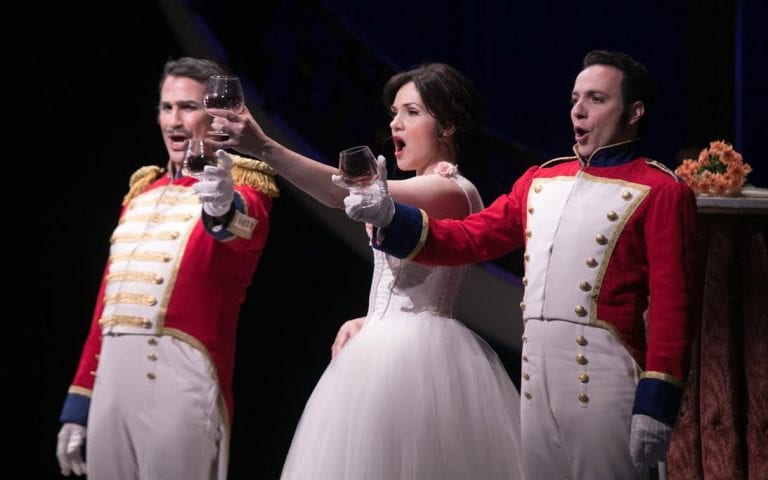 Review: The Atlanta Opera gets the last laugh with “Daughter of the Regiment”

On Saturday evening the Atlanta Opera presented the first of four performances of Gaetano Donizetti’s two-act comic opera, The Daughter of the Regiment, at the Cobb Energy Performing Arts Centre. Three performances remain, this coming Tuesday, February 27, then again on Friday and Sunday, March 2 and 4. The entertaining bel canto opera offers up the lightest demeanor among the company’s 2017–18 season productions.

The libretto’s drama is primarily a framework for singers and song, comedy and a little dance. It is, after all, an opéra comique, involving both sung numbers and spoken dialogue — in this production, the singing is in the original French, while dialogue is in the vernacular English, with English supertitles. The performances are led by conductor Christopher Allen, the John L. Magro resident conductor of the Cincinnati Opera, who is making his debut with the Atlanta Opera.

The attractive scenic design by James Noone leaves generous open space for effective use by E. Loren Meeker’s stage direction and the choreography by Meg Gillentine, who gives the chorus in particular plenty of smart moves within their capabilities as singers who also act and dance. It is an opera of much spoken dialogue, including lots of short scenes with dialogue only between scenes featuring musical numbers. Primarily, though, this is a singer’s opera for vocal display, and none of the above gets in the way of that, while underpinning it theatrically.

The cast includes soprano Andriana Chuchman as the tomboyish Marie, a vivandière or “canteen girl” who was orphaned on a battlefield and subsequently raised by a regiment of French soldiers — a role which she sang in late 2016 with the Washington National Opera. Marie is a role filled with acrobatic coloratura runs and roulades, and we get that early on with her entrance in the second scene of Act I, in the duet, “Patrie victoire, voilà mon refrain” (“Fatherland victory, here is my refrain”) and in “Chacun le sait, chacun le dit” (“Everyone knows it, everyone says it”), but it hardly stops there.

Tenor Santiago Ballerini as Tonio joins the regiment and is Marie’s suitor. The Argentine-born Ballerini, an alumnus of the Atlanta Opera’s Studio Program, is a rising star in bel canto repertoire. In Act I, scene 11, he gets what is the most famous bit of stratospheric flight in Tonio’s tour-de-force cavatina, “Ah! mes amis, quel jour de fête” (“Ah! my friends, what a day of celebration”), which requires the tenor to sing a total of nine high Cs.

Of course it’s not a case of competitive singing. Marie and Tonio get a love duet, “Quoi! vous m’aimez?” (“What! you love me?”), in the first act, two numbers before Tonio’s aforementioned stratospheric cavatina.

Bass-baritone Stefano de Peppo portrays Sulpice, the commanding sergeant of the 21st Regiment and father figure to Marie. Atlanta audiences will remember him as Bartolo in the Atlanta Opera’s 2014 production of The Barber of Seville. His role serves as an anchor throughout, both vocally and in the story line, and de Peppo performs it well.

Notably in this production, renowned mezzo-soprano Stephanie Blythe makes a role debut as the Marquise of Berkenfield, the noblewoman who takes Marie away, claiming to be her aunt, to make her socially suitable for an arranged marriage to a young duke. Blythe is closely associated with New York’s Metropolitan Opera, with whom she has performed regularly since 1995. Blythe has the largest, most rounded voice on stage, and makes good use of its qualities to portray aristocracy while also its comic foibles. She puts her personal stamp on the performance within the very first scene — “Pour une femme de mon nom” (“For a woman of my name”), attended by her butler, Hortensius, sung by bass-baritone Tyler Simpson.

Blythe and Churchman get major comic interaction in a scene that pokes fun at song itself, to open Act II. The Marquise, in trying to groom the somewhat rustic Marie for the wedding and the graces of aristocratic society, pushes her to practice a song about “Venus descending” while she would much rather sing songs like her regiment’s “Rataplan, rataplan” — as would Sergeant Sulpice, who is present at the lesson.

The cast is rounded out by two spoken roles, Duchess of Krakenthorp (Shannon Eubanks) and a notary (Edward McCreary), and two other sung roles, the regiment’s corporal (bass Christopher Dunham), who clearly leads the soldiers when Sulpice is absent, and a very brief part of a peasant (tenor Sung Bao) early in the first act.

The capable Atlanta Opera Chorus of 28 voices plus four supernumeraries portray the French soldiers, Tyrolean villagers and domestic servants. The men of the chorus portray the soldiers of the 21st Regiment as a bunch of lovable guys, all collective “fathers” and comrades to Marie, pretty much sidestepping the realities of war for purposes of the stage and plot.

At the same time, they get some of the best hummable melodies and flag-waving anthems and dance, such as their regimental anthem, “Rataplan, rataplan,” a tune which plays an important role throughout for them as well as for Marie. They also come to her collective “rescue” in the end, which quickly turns the tide from the looming wedding, which is canceled, to the reuniting of Marie with Tonio, with the approval of the Marquise in the end, who it turns out is Marie’s mother rather than her aunt.

It’s an ending that moves at a rather fast pace, almost seeming to end early as the curtain comes down. But there is no dramatic reason to drag it out further, as the plot winds up neatly, in essentially everyone’s favor, as good comedies ought – at least in the improbable world of comic opera.