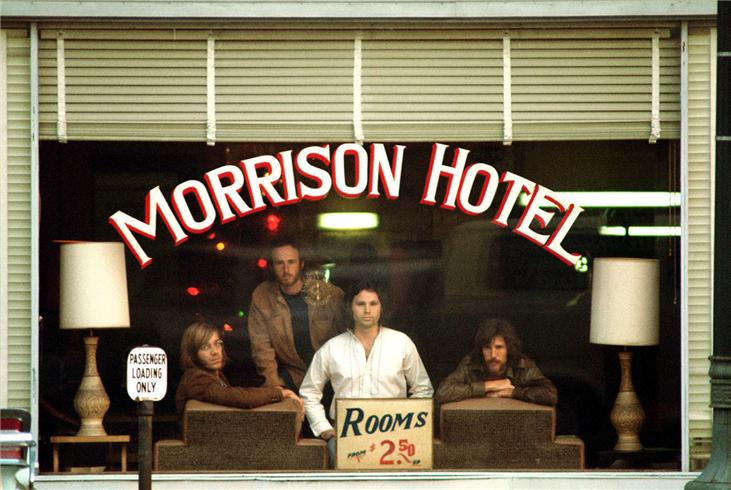 A conversation with photographer Henry Diltz, the man behind the lens of the most iconic photos in rock n’ roll

Vinyl records and photography share a great history. Countless albums are associated in our collective psyche with the artwork found on their sleeves, and many top-notch photographers have left their marks on these 30×30-centimeter covers: Robert Frank, Irving Penn, William Wegman, Weegee and Brassaï, to name a few. But very few have produced as many covers as Henry Diltz. With over four hundred covers under to his name, Diltz has built a reputation of being “the most important music photographer of all time.”

A musician himself, Diltz started taking candid photographs of his friends and putting them in slideshows for everybody to enjoy on the weekend. He ended up shooting the biggest names in rock in the late 1960s and ‘70s –both on stage and in their most intimate moments. The Doors, Crosby, Stills & Nash, the Rolling Stones and James Taylor are among the acts he has photographed.

As part of a national tour, Diltz will present Behind the Lens at the Fox Theatre tomorrow, on April 19th. The show will be a live presentation of still and moving images that go behind the scenes of many of his covers. Pattie Boyd, another fellow photographer, will join him for the second half.  Perhaps more known as the muse who inspired hits such as “Layla,” “Wonderful Tonight” and “Something,” Boyd will talk about her personal stories, her time with the Beatles (George Harrison was her first husband before she fell for Eric Clapton) and the London scene. As Diltz put it, in his distinctive down-to-earth way: “If I am the meat and potato of the show, Patty is the dessert, the cherry on top.”

We reached out to the affable Diltz over the phone and ask him a few questions about his photographic debut and the stories behind some of his most iconic images.

ArtsATL: This year, you are celebrating 50 years of a photographic life. You said that you picked up a camera for the first time in 1966 almost by accident. How did it happen?

Henry Diltz: Well, I was singing with my group The Modern Folk Quartet, and we were traveling across the country doing concerts in clubs and colleges. We stopped in front of a little second-hand shop, we went in and we all picked up these little cameras, yes, almost by accident. We started photographing each other and then we got home a few weeks later, and we developed the films [they were slides]. I said: “Let’s have a slideshow,” and that was what started me getting interested in photography.

ArtsATL: What were about these first images that made you want to continue?

Diltz: The slideshow did it. It looked so amazing to see these moments on the wall that I thought: “I want to see more of these pictures” and that was really what I cared about. I lived on Laurel Canyon in Los Angeles where all the musicians lived; so everyday I was photographing all my friends to show them the pictures and the slideshow on the weekend. And then they all became famous, with time. So that was a lucky accident.

ArtsATL:  It seems as if you got to shoot some of the biggest names in rock just by being there at the right time. Is this correct? Was it easy for you to do what you did?

Diltz: [Laugh] Well, yes, that had become a hobby of mine, and because I was a musician, I knew so many of these people, I knew David Crosby, Neil Young, Mama Cass, and so on. So they did not think of me as a photographer but as a friend of theirs, a fellow musician, and that how I was able to take these very candid photos because I did not make a big fuss. I did it very quietly. It was very easy for me to hang out with them, I was interested in the music and the people, I had the right temperament for that. So much was going on right around the late 1960s and early ‘70s.  I happened to be right in the middle of it in LA, so yes, it was that easy. I did that [the slideshows] for about a year and then somebody used one of my pictures for a magazine and it eventually became a profession.

ArtsATL: Did it stay that easy after you became a professional photographer?

Diltz: I started getting calls from people who saw my pictures and wanted me to take their picture. So yes, it got better and better. It is something I love to do, kind of a second nature. It is the way I look at the world, through a lens. Framing is important to me. I like to frame things and then I push the button.

ArtsATL: One of your most famous shots is the one known as “the Mama Cass’ picnic” where she invited Eric Clapton to meet some friends. What happened then?

Diltz: Mama Cass was like an Earth mother. We called her the “Gertrude Stein of Laurel Canyon.” She was always inviting friends over and introducing different musicians to each other. Eric Clapton was very shy and he did not know anybody in LA, so she invited him to meet some friends. She invited David Crosby and he brought this young girl he had just discovered, named Joni Mitchell, and he was just working on her first album. Eric Clapton looked quite amazed.

ArtsATL: What about the iconic cover of the Doors at the Morrison Hotel?

Diltz: We heard about that hotel and we went down there to take photos but the man inside the hotel at the desk would not let us, so we walked outside and I was going to have the group stand in front of that window. Then I saw the light right below the Morrison sign goes on and I thought, “Oh that’s the elevator’s light, the guy left the desk and is in the elevator.” I told the group to run inside and I quickly shot one roll of film. We left after five minutes and that became the cover.

ArtsATL: You also famously produced the cover for the first album by Crosby, Stills & Nash in 1969.

Diltz: They were recording their first album and they had no picture at all to show what they looked like. We found this old house with a couch and they sat there and I took their picture. Then we developed the film and we had a slideshow to look at it. Everybody liked it and thought we should use it for our cover; except that they were sitting in the wrong order because a couple of days before the film was developed, they decided to call themselves Crosby, Stills & Nash but on the picture it was backward. I said: “Let’s go back and we will retake the photo.” We drove back but the house was gone. So they are on the wrong order on their cover.

ArtsATL: There was no way to Photoshop at that time, right? Did you ever manipulate your photos?

Diltz: No. We talked about turning that photo over backwards, so they would be in the right order but then Stephen [Stills] would play the guitar left handed instead of right handed, and that would cause some problems. I don’t like to manipulate my photos. I don’t crop. I want to capture what is right there, just like that.