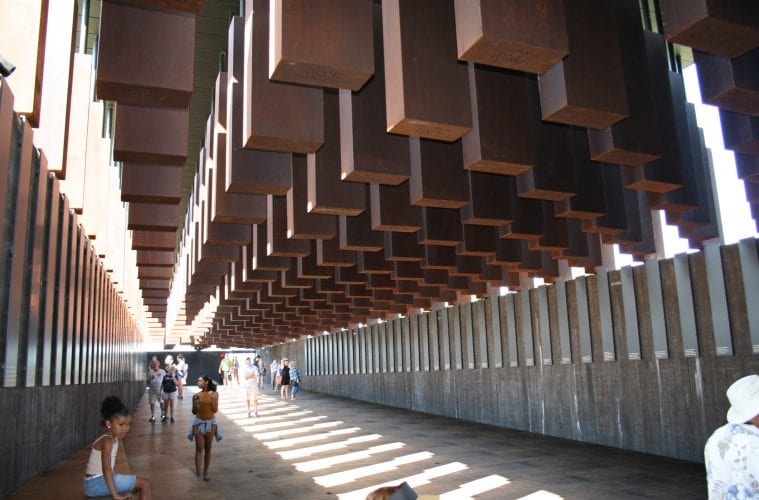 In April, the Equal Justice Initiative opened the National Memorial for Peace and Justice, which many have come to call the National Lynching Memorial, in Montgomery, Alabama, the nation’s first to honor and name the victims of racial lynching in the United States. Employing prose, poetry, sculpture and design over a six-acre elevated site, the memorial is intended to change the narrative about race in America by confronting the truth of our shared history.

Visitors move on a visual journey from slavery to its aftermath of lynching and racial terror, continuing on to the fight for civil rights and more contemporary issues of police violence. But it is the large open-air square memorial atop the hill, which was designed in collaboration with MASS Design Group in Boston, where the site finds its most powerful expression. Comprising over 800 corten steel plinths, one for each county where a racial lynching is documented to have occurred between 1877 and 1950, it records, by county and by victim’s name where they are known, more than 4,400 lynchings in the years following Reconstruction, and honors the countless others who were not recorded and cannot be documented. To journey through the square is to descend into the hellish, suffocating fact of this violence, as the floor seems to give way and the life-sized structures rise overhead, commanding you to look up.

Any conversation to advance the truth and to reconcile the pain of the past must begin with acknowledgment. The memorial’s brilliance rests in the fact that it moves beyond reflection and remembrance and calls for reckoning. There are two identical monuments for each county — one hangs permanently inside the square, and the other rests, coffin-like, outside of it. Eventually, each county will be invited to claim its monument and to display it in a place of prominence as a lasting acknowledgement of the truth of America’s acts of racial injustice. Those left unclaimed will tell a story of the work still to be done.