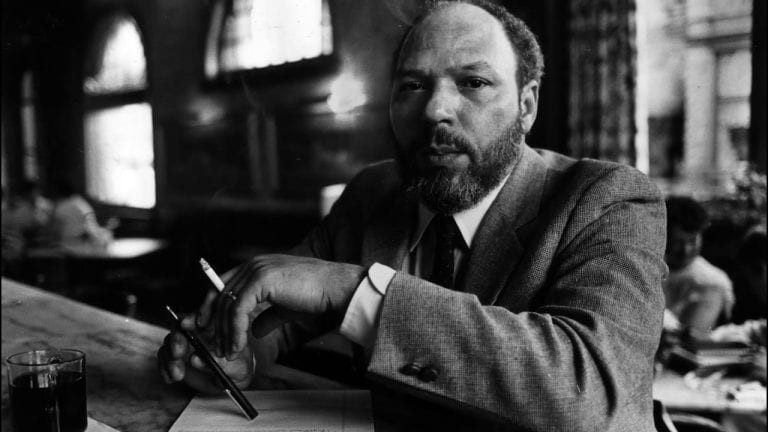 Radio Golf is the final play in August Wilson's Pittsburgh Cycle of plays that all follow people from the Hill District of that city.

August Wilson’s acclaimed Pittsburgh Cycle of 10 plays famously chronicles the lives of African American residents of Pittsburgh’s Hill District in each decade of the 20th century. The final installment, Radio Golf, set in 1997, gives the most contemporary depiction of the beleaguered neighborhood, and we actually get intriguing glimpses of what lies in store for the Hill District as it moves forward into the 21st century.

The incisively prescient show is getting a pared-down, but ultimately compelling production from the New African Grove Theatre Company at the South Fulton Arts Center through July 22. The show completes the New African Grove’s multi-year effort to produce all 10 of the plays in Wilson’s cycle, an impressive accomplishment for a small company.

In the play, well-to-do African American real estate businessman Hammond Wilks (Keith Franklin) has decided to run for mayor of Pittsburgh, and he has big plans for the dilapidated Hill District. He’s selected a formerly shuttered storefront in the neighborhood as his headquarters, primarily, we learn, to make a statement to people outside the district. Almost no one in the neighborhood votes, as his wife Mame (astrid maurer evans) point-blankly reminds him in the opening scene.

But his overarching plan is to use the campaign and mayor’s office as leverage to redevelop real estate in the Hill District with the help of his friend and partner Roosevelt Hicks (Paris Crayton III): together, they’ll bring in high-rises and high-end retail like Whole Foods, Barnes & Noble and Starbucks.

Old buildings in the neighborhood are already on the chopping block, including, we learn, the home of the cycle’s recurring, primarily offstage character Aunt Esther, the plays’ clear, symbolic connection to history and spirituality. Her death in King Hedley II is a significant and devastating moment of the cycle, as is the planned destruction of her home in Radio Golf. Wilks and Hicks regard the persistent desire of the idiosyncratic Hill resident Elder Joseph Barlow (Leon Rogers) to give the slated-for-destruction home a fresh coat of paint as a joke.

But Barlow’s own deep suspicion of progress, success and the American Dream for Black Americans ultimately pervades the play’s action. It’s given beautiful voice by Rogers in one of the play’s early speeches. He holds up a quarter and describes America as a puzzlingly tilted vending machine: If you keep putting your quarter in and nothing comes out, is it your quarter that’s the problem? The machine itself?

The metaphor persists as we watch Wilks’ and Hicks’ plans unfold and eventually come crashing down. Here, as elsewhere in the cycle, Wilson’s outlook is deeply pessimistic, and as 1997 moves further into history for us, his vision seems more incisive and accurate than ever.

The New African Grove production is pretty stripped down — the set is bare bones, and lighting consists of “lights up” or “lights down” — but the small company does a lot with a little. The drama here is still compelling, if long-winded. I found the real estate deals and political schemes getting a bit labyrinthine in the second act.

The show clocks in at about three hours, and although I was gripped through Act One, I have to admit I got a bit lost in Act Two. I predicted early on that whatever was happening on the business and political end of things would not end well; getting there takes a while. There are just five characters in the play, which may be too few for the story of widespread malfeasance being told. Wilson does create a world outside the one-room office, but things onstage can inevitably start to seem too narrow, even claustrophobic, when they should feel more expansive and peopled.

Wilson is often accused of underwriting roles for women, and those who make that argument will find no shortage of evidence here. The four men are given wonderfully dramatic situations and fantastic speeches, but the lone female character seems to walk on, say a few lines and walk off. evans does what she can with the role, but her and Wilson’s efforts to make the character Mame as richly complex as the men feels effortful, even forced, in the end.

New York-based playwright, former Atlantan and ArtsATL 30 under 30 artist Paris Crayton III makes a welcome visit home to perform the role of Wilks’ partner Roosevelt Hicks, a character that could easily come across as a self-involved, slick schemer. But in Crayton’s capable hands, Hicks seems admirably aspirational, energetic, likeable and funny, making us root for the character, even as the drama lays out all of his comic-tragic flaws.

Atlanta playgoers accustomed to seeing Wilson’s cycle plays mounted with all the slickness of an Alliance or True Colors production may be somewhat put off by the bare bones nature of the show by the small theater company, but in the end, those who stick with it will recognize that Wilson’s final play has been given thoughtful expression here that rewards engagement.