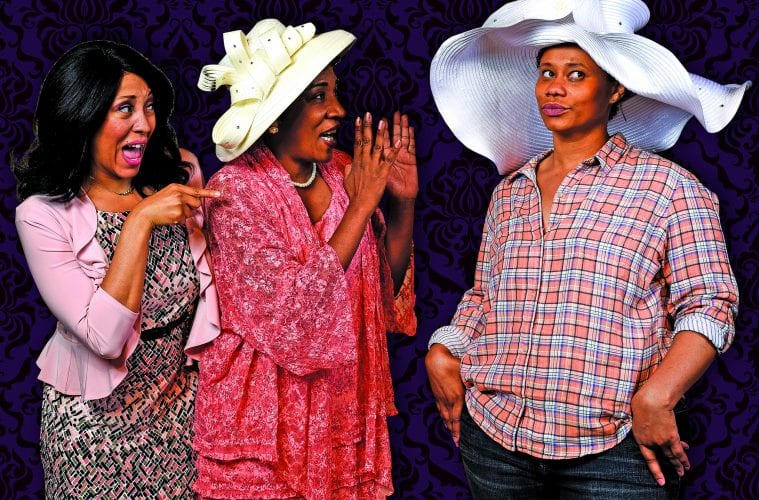 Review: Horizon’s “Black Mothers” has good intentions, but its execution comes up short

Nothing forces resolution like impending death, and in Trey Anthony’s latest play, How Black Mothers Say I Love You, time is running out for resolution between Daphne and her daughters. Onstage at Horizon Theatre through August 26, the play is based on Anthony’s experience of her mother leaving her in England while she worked as a domestic in Canada. Under the direction of Thomas W. Jones II, the show marks a return to Horizon for Anthony, whose play da Kink in My Hair was produced at the theatre in 2016.

A story about a queer Caribbean woman’s experience of trying to find happiness in home, career and motherhood is certainly one that needs to be told, and the subject is very timely. In May, an article that examined the strained relationships between some black mothers and daughters went viral on the website MadameNoire. The writer unpacked how her mother’s behavior taught her unhealthy relationships with women — never trusting, never apologizing for wrongs and ruling with fear. Black Mothers devotes two hours to exploring all of these issues, with the added layers of a mother who went to America searching for a better life, one daughter being a lesbian and another dead.

In the play, Claudette (Minka Wiltz) has been called home to Brooklyn by her sister Valerie (Wendy Fox-Williams) to help care for her mother, Daphne (Yvonne Miranda Singh), who is dying of cancer. Claudette lives in Harlem, but has not been home in three years in order to avoid her mother’s disdain for her sexual orientation and the ghost of her deceased younger sister Cloe (Riley Charles), who died years before.

Overflowing with resentment because her mother left her and her sister in Jamaica while she worked as a domestic in New York and remarried, Claudette sees this trip as an opportunity to confront her mother. But as Daphne buries her burdens in church and end-of-life revelations bubble to the surface, Claudette realizes that things are not so cut and dry.

The role of Claudette is a stretch for Wiltz, and unfortunately, her performance falls short. She is brash, harsh and slick with her tongue in a way that would get her slapped in a Caribbean mother’s household. Her performance makes Claudette seem unstable and it’s hard to see how this character has sustained any sort of a life given how unwound she is from the very beginning of the show.

Fox-Williams as Valerie renders a woman who is subtle and multi-layered and vivacious and depleted all at once. She is the caretaker, financier and backbone of the family, but she is also married to a white man she may or may not love. Her emotional range is palpable, and she captures the burden that many women who are tasked with caregiving silently bear. Singh also delivers a dynamic, engaging performance as the matriarch of the family, and Charles rounds out the cast as the ghost of Cloe.

The action takes place in their Brooklyn home on a set built with trademark impeccable detail by Isabel and Moriah Curley-Clay. The special effects built into the set to represent the presence of Cloe’s ghost, however, feel over-the-top and out of place. It’s a bit too extreme for the given circumstances, and Mary Parker’s lighting is so good, that a lot of it feels like unnecessary emphasis.

The combination of overacting and too much stage business distracts from the story Anthony is telling. She wrote in her program note that this play is for, “every mother mothering under less than ideal circumstances” and “every daughter who is trying to find her own place of healing while navigating her own childhood hurts.” Her writing certainly has that intention, but this production falls short of bringing it to fruition.