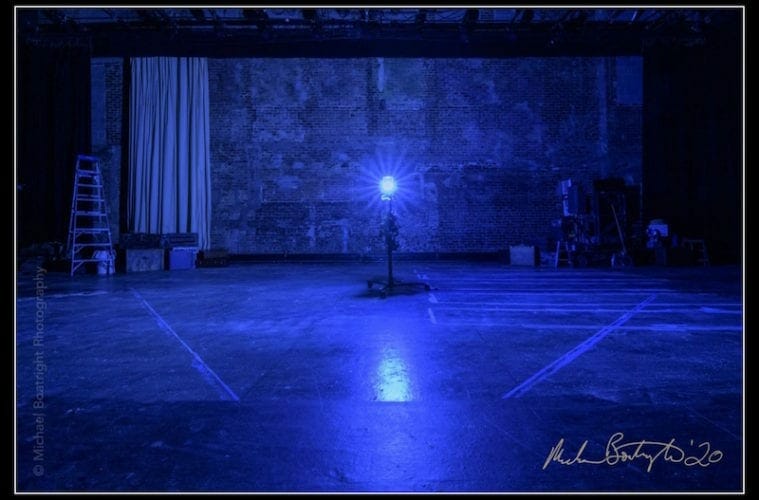 Theatrical Outfit's stage, the Balzer Theater at Herren's, has 200 empty seats downtown. It closed in mid-March during the run of Paula Vogel's award-winning backstage drama "Indecent." Michael Boatright signs each photo in the lower right corner.

ATLANTA PHOTOGRAPHER MICHAEL BOATRIGHT loves theater. Always has. When Covid-19 forced metro playhouses to go dark — some in the midst of runs, others with shows about to open — he meditated on how to help. “The thing I’m trying to bring out is the sense of emptiness and loss represented by these empty theaters,” he says. “It’s easy to lose sight of the sheer vastness of the impact on the theater community caused by lockdowns and social distancing.” His answer: Dark Houses. Companies large and small have been shuttered for some 125 days . . . and counting. Actors, directors, choreographers, stage managers, carpenters, painters, electricians and set, lighting, costume, sound, props and video designers are unemployed. Some companies have furloughed staff members. No one knows what the 2020–21 season will look like, save for the Alliance Theatre, which has announced a lineup of in–person, drive–in and virtual shows that will (hopefully) commence in November. Most other theaters are evaluating weekly, if not daily, how best to proceed.

Boatright, 61, grew up in Tulsa, Oklahoma, where his photographer–dad taught him how to shoot and process film in a darkroom. “There is something magical to me in setting up a shot, getting the exposure, focus, composition right and then using chemistry to create an image.”

Boatright has photographed 20–25 spaces to date and has invested about 150 hours of his time, all for free. He’s still trying to nail down shoots at several venues, including True Colors Theatre Company/Southwest Arts Center, but here are 10 of his images. ALLIANCE THEATRE, the Coca-Cola Stage. 650 seats in Midtown. Went dark in mid-March during the run of the family musical “Naked Mole Rat Gets Dressed: The Rock Experience.” Donate HERE. AURORA THEATRE mainstage. 250 seats in Lawrenceville. Went dark in mid-March during the run of the musical “On Your Feet: The Story of Emilio & Gloria Estefan.” Donate HERE. OUT FRONT THEATRE COMPANY. 149 seats in West Midtown. Dark since March 15, during the run of “warplay,” a reimagining of a same-sex love story from the “Iliad.” Donate HERE. SHAKESPEARE TAVERN PLAYHOUSE. 200 seats in Midtown. Went dark after the March 15 performance of “Much Ado About Nothing.” Donate HERE.