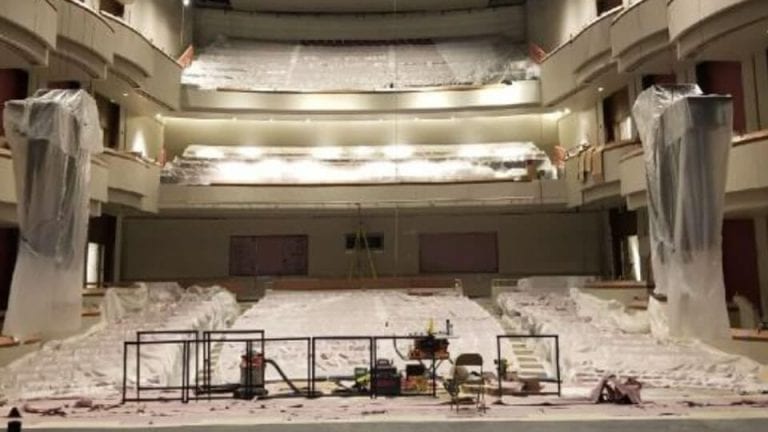 The Atlanta Opera and the Atlanta Ballet will be among the performing arts groups to help break in a new venue, the Performing Arts Center at City Springs on Roswell Road in Sandy Springs, during its inaugural 2018–19 season. The companies are finalizing details for performances at the theater in spring of 2019. A new troupe, City Springs Theatre Company, will also present five productions, which reportedly include 42nd Street, South Pacific and Billy Elliot the Musical, during the venue’s first season.

The venue’s primary space, the Byers Theatre, has state-of-the-art tech, a full orchestra pit, a fly loft, rehearsal room, cinema-quality projection, a 6,100 square-foot glass-enclosed lobby and seating for 1,070 on three levels including box seats. The Studio Theatre is a 5,000 square-foot flexible space with a separate lobby, lighting grid and sprung floor that can hold 300 to 350 people for seated events and performances.

Organizers say the new venue will host a wide variety of events, including music, dance, theater, film, lectures, variety shows, comedy acts and family-oriented programming. The PAC is also designed to host students in various activities ranging from classroom-based instruction to immersive, hands-on experiences. The facility will host a variety of nonperformance events, as well, including parties, galas, meetings, conferences and corporate events.

The Performing Arts Center is an unusual, new type of development for an unusual, new type of city. Sandy Springs became a city in 2005 when residents voted by referendum (94% to 6%) to incorporate, with many residents vocally expressing their frustration with Fulton County services. Nearly all city services in Sandy Springs are run by private companies, a situation unusual enough to attract the attention of the New York Times in 2012.

The property housing the new venue, City Springs, will be a 14-acre mixed-use development that will include shopping, condominiums, a conference center, four acres of green space and city offices, all built through a public-private partnership between the City of Sandy Springs, Carter and Selig Enterprises. Design and build partners include Rosser International (architect), Holder Construction and jB+a (landscape architect). Spectra by Comcast Spectacor will oversee management and rental of the performing arts center, meeting and green spaces.