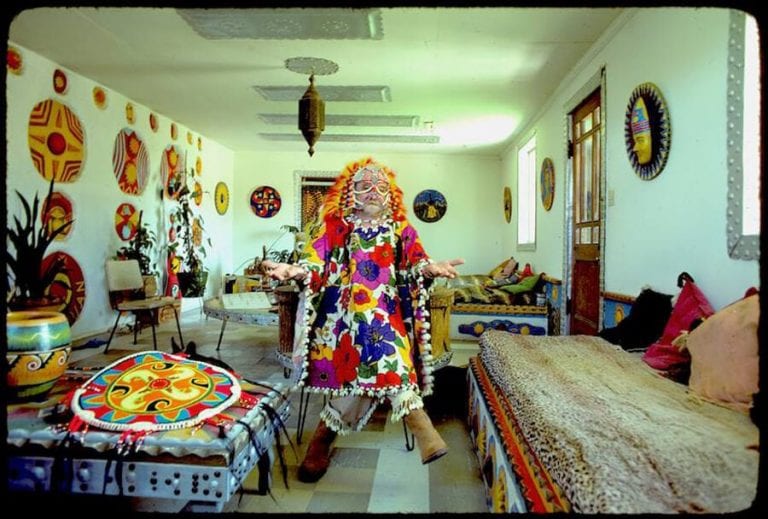 A new opera based on the life of eccentric Georgia artist Eddie Owens Martin, better known as St. EOM, will be performed at the Atlanta Contemporary on January 11 to celebrate the opening of a new exhibition of his paintings. Martin is pictured here at his home in Pasaquan near Buena Vista, Georgia. (Image courtesy Pasaquan)

linn meyers: gazing has its limits. The Washington, D.C.-based artist creates a site-specific wall drawing for the colonnade on the main floor of the Columbus Museum in Columbus, Georgia. Visitors can see meyers at work on the site through January 13. Exhibition through June 17. Columbus Museum.

Oli Rodriguez. The photographer and faculty member at The School of the Art Institute of Chicago speaks about his work. January 16 at 6 p.m. Troy Moore Library, Georgia State University.

The Ramayana Anti-Hero. Dr. Joyce Burkhalter Flueckiger, professor of religion at Emory, discusses the cement images of Ravana, the antagonist of the Ramayana epic tradition, which stand at many village and urban neighborhood centers in the plains of the central Indian state of Chhattisgarh. January 17 at 7:30 p.m. Carlos Museum.

The Opera House. A new documentary by filmmaker Susan Froemke chronicles the creation and opening of the Metropolitan Opera’s storied home at Lincoln Center. January 13 and 17. Area movie theaters.

Look & See: A Portrait of Wendell Berry. The Georgia Center for the Book screens a new documentary about author Wendell Berry and his rural home community in Henry County, Kentucky. January 11 at 7:15 p.m. Decatur Library.

Leonard Bernstein and the Beethoven Seventh. Concertmaster David Coucheron performs Saint-Saëns’ Violin Concerto No. 3, and guest conductor Peter Oundjian leads the Atlanta Symphony in performances of Fancy Free by the 25-year-old Leonard Bernstein and of the last piece Bernstein conducted before his death at 72, Beethoven’s Seventh Symphony. January 11–13. Symphony Hall.

Maytag Virgin. Courtney Patterson and Brad Brinkley star in Audrey Cefaly’s 2015 play about a year in the life of a recently widowed high-school teacher and her mysterious new neighbor in rural Alabama. January 11–February 11. Aurora Theatre.

Women’s Shorts. Out of Box presents an evening of short plays written by women about women over 50 in honor of Jo Howarth Noonan, a beloved Atlanta actress who passed away in 2015. January 12–20. Out of Box Theatre.

Dinosaur! The Alliance’s Theatre for the Very Young reprises its collaboration with the Fernbank Museum of Natural History for an interactive production introducing kids to the wonders of the prehistoric world. Through February 18. Alliance Theatre Black Box.