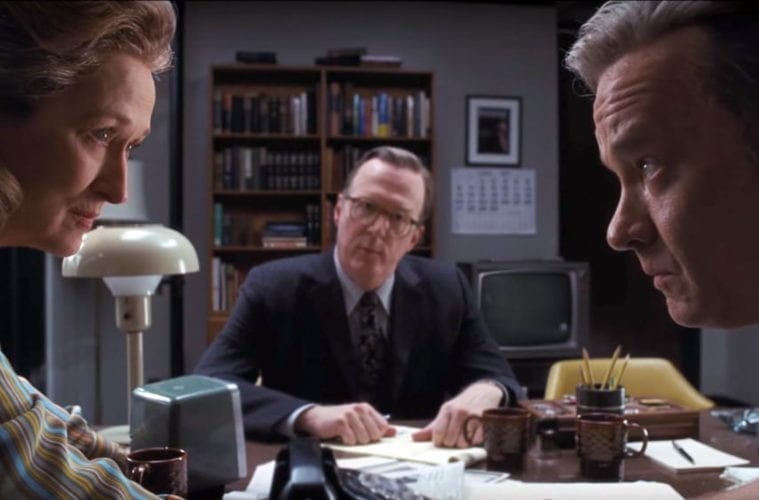 Review: Spielberg and Meryl Streep dazzle in “The Post,” a timely ode to the free press

Watching The Post, it’s easy to sign onto the film’s barely veiled, metaphoric rebuke of Donald Trump’s assault on the First Amendment and the free press. What’s easier to miss is that this is the leanest, swiftest film in years from director Steven Spielberg, and one of the best recent performances by Meryl Streep.

Streep and Spielberg are joined by Tom Hanks, the sort of lineup that veritably defines the notion of Prestige Film. That kind of label has often translated into turgid, self-congratulatory pictures (The King’s Speech, A Beautiful Mind, Crash, Gandhi, etc.). Not this time.

You could see The Post (and the filmmakers clearly do) as a kind of prequel to All the President’s Men. Now, nothing can quite eclipse that landmark 1976 title, the gold standard of journalism movies (though Oscar-winning Spotlight was a pretty good descendant). The Post tells a similar story about a bunch of scrappy reporters and editors going up against a deceitful, monolithic administration. But it serves as an important corrective to Alan J. Pakula’s movie, in which Washington Post publisher Katherine Graham isn’t even an onscreen character. Here, played by Streep, she’s the focal point.

Kay, as she’s known by friends, is the daughter of the owner of the Post, who passed along publishing duties to Kay’s husband. For years, in the role of Washington’s wife, she socialized with the Kennedys and the Johnsons with no concern over appearances of conflict-of-interest. But times have changed. Her husband is dead, she’s now the reluctant publisher, and as her newspaper counts down to its initial public offering, she has to make a decision that could destroy the Post or help it attain the national prominence it never previously enjoyed.

That’s all because of top-secret documents smuggled to the press by former military analyst Daniel Ellsberg (Matthew Rhys), who worked at the Pentagon under Secretary of Defense Robert McNamara (Bruce Greenwood) in the 1960s, and spent two years in Vietnam as a member of the State Department. There, he contributed to the top-secret files that became known as the Pentagon Papers. He saw firsthand that the optimistic picture of the Vietnam War painted by sequential White House administrations was a lie served intentionally to the American people. The war was a quagmire with no chance of victory, so Ellsberg blew the whistle, getting the documents into the hands first of a reporter for the New York Times, and subsequently to the Post.

Should the newspaper publish them? That’s the question. The Post’s hardworking editor Ben Bradlee (Hanks) thinks publication is crucial to the newspaper’s future, as well as the nation’s — though the Nixon White House is determined to block the paper by all possible means.

Seen by most as a fluttery doyenne whose biggest decisions involve determining the seating plan at her lavish dinners, Kay is new to taking gambles with the family business. Streep gets the woman’s blend of dithery self-effacement and steely entitlement just right. Then she — and the script by Liz Hannah and Josh Singer — show Kay emerging definitively from her pampered cocoon. (Costume designer Ann Roth puts her in a gold caftan during the film’s climactic scenes that actually make her look like some sort of butterfly.) Streep shows us, step-by-step, how Katherine Graham turned from Washington hostess to an iron lady — the title of the bad Maggie Thatcher film that earned Streep her last Oscar.

As her partner and antagonist, Hanks wisely doesn’t try to replicate the growl Jason Robards Jr. brought to the role in President’s Men, earning himself an Oscar. Hanks is still Hanks, but with a tough-guy edge that he manages to pull off. The supporting cast — playing a coterie of ink-stained strivers, board-member naysayers and friends and family — are the dramatic equivalent of sharpshooters. It’s a fantastic ensemble, working with the industrious buzz of a hive.

But the MVP is Spielberg. He lays out the story in a propulsive, nonstop way. The Post is an example of the fat-free filmmaking craft he exhibited as a young man, before he became “Steven Spielberg.” And it’s the shortest of his last five films, even beating overstuffed kiddy flick The B.F.G. by a minute.

Critics might say that, however based in history, The Post is a liberal fantasy. Oh sure, it maybe too easily lionizes the olden days of the hardscrabble print media. But lord knows, we need something to idealize these days. And whether or not you care to reminisce about the good ol’ days of the news biz, The Post’s core story of a woman finding her voice and power could not be more timely in the #MeToo/#TimesUp moment of today.