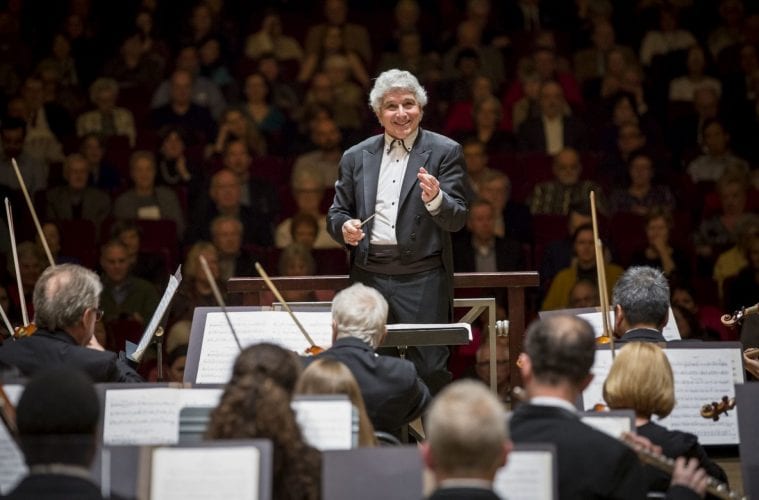 On Thursday evening at Symphony Hall the Atlanta Symphony Orchestra rang in the new year with a concert of music by Bernstein, Saint-Saëns and Beethoven, led by guest conductor Peter Oundjian and featuring ASO concertmaster David Coucheron as violin soloist. Excitement was palpable in the nearly sold-out Symphony Hall for what proved to be an engaging, energized performance. The program will be repeated on Saturday at Symphony Hall, but as of this writing, word is that the concert is also almost sold out.

Oundjian and the orchestra kicked off the evening with “Three Dance Variations” from Leonard Bernstein’s ballet Fancy Free. Premiered in April 1944, during the decisive final years of World War II, the ballet, with choreography by Jerome Robbins, portrays the story of three sailors on shore leave in New York. Although a mere seven minutes combined, the three dances – a galop, a waltz and a danzon (a Cuban contradanse) – represent a core element in the ballet, each danced by one of the three sailors, vying for the attention of two attractive women – the loser in the contest winding up dateless. Afterward, the women can’t decide, and when a fistfight breaks out among the sailors, the two women flee the scene.

Were the listener unfamiliar with the music and asked to name the composer of the first dance, the robust “Galop,” one might immediately guess Shostakovich rather than the 25-year-old Bernstein – it is so astonishingly imitative of the Russian composer’s signature style the mistake is easily forgiven. The second dance, the “Waltz,” with its bluesy lines, begins to show recognizable evidence of Bernstein himself, as does the concluding “Danzon,” foreshadowing slightly the matured signature Bernstein style of West Side Story, which came 13 years later. Though these three Fancy Free dances feel more heavy-handed by comparison, their rambunctious rhythms and visceral energy made for an effective, appealing curtain raiser.

Oundjian, who is music director for both the Toronto Symphony Orchestra and the Royal Scottish National Orchestra, most recently appeared on the ASO podium one year ago when he conducted a program of music by Rimsky-Korsakov, Haydn and Bartók (but only one concert as that Saturday’s scheduled repeat performance was canceled due to winter weather conditions). David Coucheron joined Oundjian and the orchestra onstage for the Violin Concerto No. 3. Op. 61, of Camille Saint-Saëns, the last of that composer’s violin concertos, written in 1880. It was premiered by Spanish virtuoso violinist and composer Pablo de Sarasate, to whom it is dedicated, and from whom Saint-Saëns learned much about writing for solo violin. Although its technical demands are less than in Saint-Saëns’ other two violin concertos, it places greater interpretative and expressive demands upon the soloist.

As such, it proved an especially splendid choice of solo repertoire for Coucheron, showing vividly how far his playing has come in the seven and a half years since he joined the ASO as concertmaster in September 2010 – at the time the youngest concertmaster among all major US orchestras. While Coucheron’s playing was primarily identified by a notable lyrical sweetness in those earlier years, Thursday night’s compelling performance of this Saint-Saëns concerto showed well the broader expressive and coloristic range that has come to typify his playing today: from a more subtle, multi-hued lyricism to an assured, vigorous sonic presence in the work’s more assertive passages. It was the high point of the evening, surely a bellwether for his future performances as soloist.

The evening closed with Ludwig van Beethoven’s Symphony No. 7. The old platitude is that Beethoven’s odd-numbered symphonies are the “greater” of the nine, but while what constitutes “greatness” may be up for debate, it would be fairer and more accurate to say they are the more “extroverted” of the nine. That came across emphatically with Thursday’s robust performance of the Seventh by Oundjian and the ASO. Its joyfully dancing Vivace that follows the slow introduction in the first movement set the demeanor for this concluding half of the program, despite the somewhat somber slow march that comes after it. The flighty scherzo third movement, marked Presto, subsequently recharged the energy again, while the final movement’s combination of Apollonian musical structure and Dionysian emotive exuberance brought the concert to a rousing close.