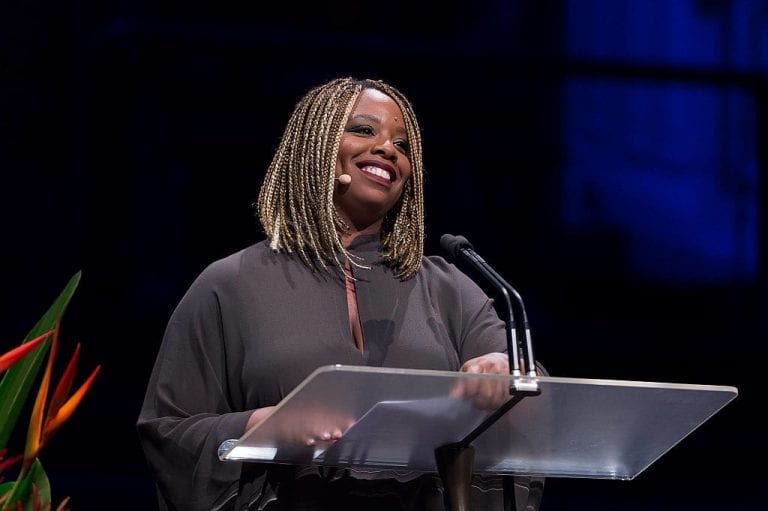 Black Lives Matter cofounder Patrisse Khan-Cullors is the author of a new memoir. She visits Atlanta to speak at the Carter Center on January 22.

A life in Black Lives Matter: how Khan-Cullors’ childhood made her an activist, and helped start a movement

Growing up poor, black and queer in Van Nuys, California, Patrisse Khan-Cullors had every reason to believe that her life and the other black lives around her didn’t matter. She now chronicles the familial and cultural traumas that led to her life of activism in When They Call You a Terrorist: A Black Lives Matter Memoir, written in collaboration with journalist Asha Bandele.

“I wanted to interrupt and bring back the story of Black Lives Matter, especially after we’d been called a terrorist organization and there are so many different views of us in the media,” Khan-Cullors told ArtsATL during a phone interview in advance of the book’s release on January 16. “I think it’s important for us to continue to lift up the narrative of black people and the work that we do and the work that we’ve been doing.” Khan-Cullors will visit Atlanta to read from and speak about the new book on January 22 at 7 p.m. at the Carter Library.

When They Call You a Terrorist offers an enlightening look into the  life of its author, one of the three founders of Black Lives Matter. She explores in great detail the misfortunes placed upon her family as a result of race and class and also how her life often contrasted with the lives of the other students she went to school with. She reflects especially on her brother’s mental illness and how he was oftentimes treated as a criminal instead of as someone in need of treatment. Additionally, she writes about her biological father’s struggles with addiction and her own experiences and romantic relationships as a queer black woman. 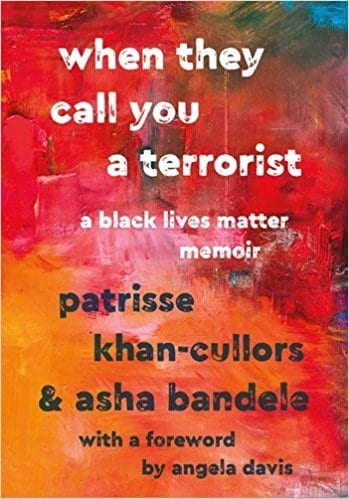 The strength of When They Call You a Terrorist is that it places many of Khan-Cullors’ childhood memories into a context that allows readers to see her story as far from unique. Her story is the story of many black families, although tales of familial trauma are rarely shared so explicitly in public. Instead, these life-altering experiences are passed down through generations, shrouded in shame and secrecy. Khan-Cullors pulls the curtain back on her own personal experiences and thus the lives of many black Americans. When she recalls how her brother was arrested for doing nothing more than hanging out with friends, she cites the American Civil Liberties Union on how “gang injunctions make otherwise legal, everyday activities illegal for people they target.” When her brother spirals out of control and a hospital won’t take him because he is a felon, she cites the Washington Post on how the people in prison with severe mental illnesses vastly outnumber patients receiving care in state psychiatric hospitals.

But readers hoping for a glimpse into the inner workings of Black Lives Matter may be disappointed. The book provides a cursory understanding of Black Lives Matter as an organization, including how it was founded after the acquittal of George Zimmerman and how it rose to prominence in Ferguson following the death of Michael Brown. Khan-Cullors adds context to the often-recounted moment of a Facebook post that led to the start of a major movement. But When They Call You a Terrorist fails to reveal what the coalition might look like as it moves deeper into the Trump era. And that might simply be because organizers are still trying to figure out exactly what the future holds. “While each [local] chapter is doing their work, the global network will be taking some time to decide what we want to look like in the next five to ten years,” Khan-Cullors said during the phone interview.

While media reports indicate conflict between organizers within the network, When They Call You a Terrorist  doesn’t touch on the subject. During our conversation, Khan-Cullors confirmed reports that fellow Black Lives Matter founders Alicia Garza and Opal Tometi are no longer a part of Black Lives Matter’s day-to-day operations. “They’re still a part of the movement. The movement is beyond our global network,” she said. “[Stepping] back means that they are still a part of The Movement for Black Lives but they’re focusing on their paid lives. There is no beef or issues. People get to say ‘this is too much.’”

The book derives its title from the media attention that plagued the organization after five Dallas police officers were killed in 2016 following protests in the wake of the killings of Philando Castile and Alton Sterling. Following the incident, some media outlets linked the police killings to Black Lives Matter. In the book’s forward, veteran activist Angela Davis reflects on the significance. “The very title, When They Call You a Terrorist, asks the reader to engage critically with the rhetoric of terrorism . . . and how this rhetoric attempts to discredit anti-racist movements in the United States,” she writes. “At the same time, racist, misogynist, and transphobic eruptions of violence continue to be normalized.”

When They Call You a Terrorist is a moving memoir, a recounting of one individual life that echoes the experiences of an entire community that has been negatively impacted by poverty and policing. It is a look at how, despite their omission in media coverage, feminist and queer activists have been the backbone of Black Lives Matter since its creation. The book illuminates the women of Black Lives Matter as the unsung heroes doing the work behind the leading movement of this generation, but it also champions the everyday black woman who often serves as a family advocate when loved ones can’t fight for themselves. (One has to look no further than the recent deaths of Erica Garner, daughter of Eric Garner, and Venida Browder, mother of Kalief Browder, to see how the families of victims often suffer while trying to effect meaningful change.)

Throughout the book, Khan-Cullors and Bandele also take care to portray black men in their complexity, not just as stereotypes defined by crime and drugs. When describing her brother, Monte, Khan-Cullors reflects on the way he cared for baby birds or his siblings, in addition to considering his time in prison or his psychotic breaks. When the author reflects on the inconsistent presence of black men during her childhood, she also speaks of how they taught her to love. Whereas black men are all too often portrayed as one-dimensional, When They Call You a Terrorist ensures that readers know black men deserve the same empathy that is casually afforded to other groups.

When They Call You a Terrorist is a revealing look into the life of one of the most prominent black activists of this generation, but it is not a Black Lives Matter tell-all. Instead of delving into behind-the-scenes drama, Khan-Cullors and Bandele have created a work that is an ode to black women and the community they work to uplift.