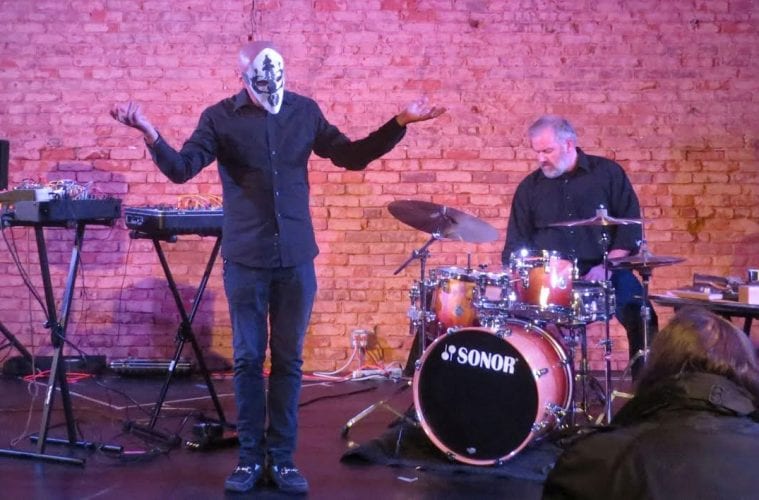 Review: Creative Music in Hapeville has a grand finale with Stuart Gerber and Marc Fleury

On Saturday night Creative Music in Hapeville presented its final concert, an evening of improvisatory music featuring percussionist Stuart Gerber with synthesist Marc Fleury at the Hapeville Performing Arts Center, a home stage of the Academy Theatre. They were joined in the second set by an all-star lineup, which included a handful of series regulars: cofounder Jeff Crompton on sax/clarinet, trumpeter Roger Ruzow, cellist Ben Shirley and tuba player Bill Pritchard. Another series regular, guitarist Killick Hinds, was also scheduled to play as part of the latter set but was indisposed due to the flu.

Crompton and Kat Hutcherson cofounded Creative Music in Hapeville some four years ago as a bimonthly out-of-the-mainstream concert series, just south of the Atlanta city limits. The series got its start at the former Norton Arts Center, but over the course of its lifetime, the series was obliged to make several moves of venue. While relations with the Academy Theatre have been gracious and excellent, Crompton says that the multiple changes of location and consequential downtimes over the years has taken a toll on the series, and that it “has run its course, and it’s time to let it go.” Nevertheless, Crompton urged the audience to “please continue to support non-mainstream music in Atlanta.”

Crompton says they had been trying to coordinate booking Gerber on the series for over a year, and the timing just happened to work out right for the series’ final event. Gerber took the opportunity to invite programmer-synthesist Marc Fleury to join him in the improvisatory concert. This was their first public performance together, although they had recently been experimenting with duo improv and expect their collaboration will develop further in the future.

Gerber and Fleury make for an engaging, interesting creative mix given their respective intensive backgrounds. Each performs internationally. Gerber is co-artistic director of contemporary music ensemble Bent Frequency and professor and coordinator of percussion at Georgia State University. An active performer of new music, Gerber has worked with an array of contemporary composers, and is especially noted for his expertise with the music of Karlheinz Stockhausen, including the world premiere of Stockhausen’s last solo percussion work, “Himmels-Tür.”

Born in Paris, France, Fleury is best known for his work in the computer software industry as the creator and developer of JBoss, an open-source Java application server which was subsequently acquired by Red Hat. Since 2007, Fleury has turned his focus on his family and personal interests in music, teaching and research in contemporary physics. The last is not at all surprising: Fleury holds a master’s degree in theoretical physics from the École Normale Supérieure and both a bachelors and doctorate in physics from the École Polytechnique in Paris.

In this concert, Gerber performed on drum set plus a smattering of small hand-held percussion while Fleury trod the totally electronic route with setup that included a Buchla Easel synthesizer and a custom Eurorack effects rig, the latter put together specifically for this performance. Their performance was improvisatory, but not unstructured. An underlying sound source came from a broadcast of a conservative radio talk show, featuring topics that ranged from how “socialism will destroy us” to erectile dysfunction. The audio was cut up, deconstructed, electronically manipulated and reconfigured. Fleury said afterward that it was chosen not so much for political reasons as his own observation that it sounded “just crazy.”

Gerber started off the improv alone, and when the audio elements from the radio broadcast began, Fleury came on to center stage wearing a paper mask, adding a bit of the theatrical flair for a few minutes, gesturing to the audience in almost the manner of a religious celebrant against the transformed talk show, which sounded ringingly hollow — as if heard bouncing around in an underground catacomb, or somewhere in the wrong part of your head. Fleury kept the mask on as he moved over to his instrument bank for the rest of the performance, with Gerber playing off the rhythms of the audio mix while adding to the overall fascinating, and at times disturbing, sonic tapestry.

After intermission, the other musicians took the stage with Gerber and Fleury, filling out the rest of the evening with a more familiar kind of free improv, the only restriction laid down being the order in which the musicians entered the joyful sonic fray. It proved a fine way to close out the series that will leave its core fans with plenty of fond memories.