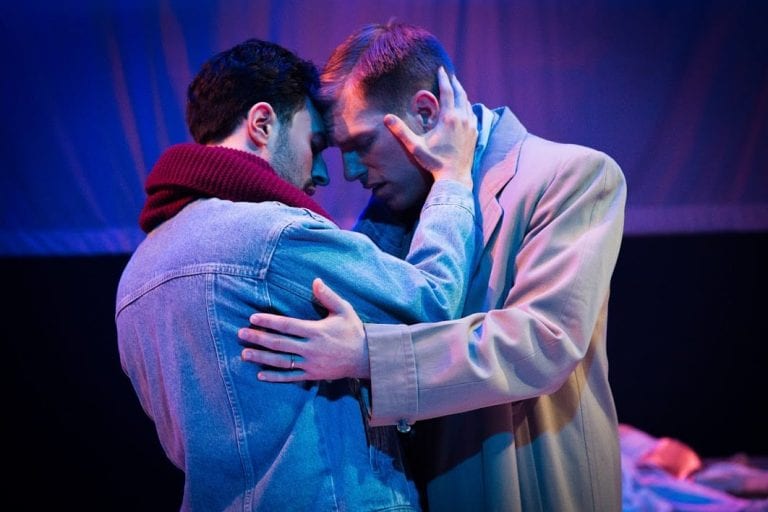 Review: Part one of “Angels in America” jumps off to a strong, though uneven, start

Kicking off the 2018 theater year with a bang is the Actor’s Express’ production of Tony Kushner’s much lauded Angels in America, which took home virtually every award (a Tony and a Pulitzer, to name a few) possible after its first part premiered on Broadway in 1993. ArtsATL critics Andrew Alexander and Jim Farmer weigh in with their takes on the new production.

Jim Farmer: Howdy Andrew! We’ve started off 2018 with a heavy-hitter. We both saw the first half of Actor’s Express Angels in America — Millennium Approaches –– over the weekend. It’s a drama set in the eighties in NYC that looks at AIDS, politics, sex and much more. It’s certainly a play to talk about and dissect afterwards. What were your initial thoughts?

Andrew Alexander: Great play, uneven production. I was nearly moved to tears by Carolyn Cook’s opening monologue and then less impressed by subsequent scenes on an opening night that was sort of a bumpy start, with some flubbed lines and a piece of the set that wouldn’t move correctly. Things improved by the final act, which really took off. Speaking of taking off, the feeling is very much of going on a journey, and that’s reflected in the inventive set, which reminded me of the interior of an aircraft. (The seating rows at Actor’s Express are as uncomfortably narrow as the rows of an airplane by the way. Probably best for audience members to prepare for the long show the way they’d prepare for a long flight). What did you think?

Farmer: I think uneven is an apt word to use.  Kushner’s play is so dense, so loaded that it almost demands to be discussed afterwards. I’ll start out with aspects I really enjoyed. Cara Mantella as the lonely, pill-popping Harper, who is starting to realize that her husband Joe Pitt (Joe Sykes) is gay, is terrific. I had a lot of empathy for the character and her plight — and Mantella doesn’t overplay it. Seeing as how I chair the local Carolyn Cook fan club, I must admit I loved her multiple characterizations — a rabbi, a doctor, Ethel Rosenberg and Joe’s mother Hannah, who comes to New York from Utah to check in on her son. Those two were the standouts for me, although I enjoyed Louis Greggory as well as Louis, the boyfriend of Prior (Grant Chapman) who has developed AIDS. Louis loves Prior but can’t bear to stick around and see him get sicker.

Alexander: I agree Carolyn Cook is impressive in the multiple roles. She definitely puts her own spin on these characters, but holy woah, she looks exactly like Meryl Streep, who played the same roles in the television miniseries, when she’s in the wig and costume as Joe’s mother or as Ethel Rosenberg. I mean, it could have been her. It was uncanny, especially because the two actresses don’t otherwise resemble each other much. I agree Louis Greggory made a really interesting Louis, and one of the things I like about this production is that Louis and Prior are a very different sort of couple than I’ve seen elsewhere. Those roles seem to be surprisingly more malleable than some of the others, which demand a pretty straightforward sort of interpretation and performance. Louis is one of the characters I’ve been enjoying following the most.

Farmer: I must admit, I was a little disappointed in Robert Bryan Davis as closeted lawyer Roy Cohn. He has some excellent scenes, especially a moment when he refuses to admit he is gay or has AIDS with a doctor, and captures the character’s bombastic nature. But I didn’t see any other dimensions. Maybe those will come in Perestroika, the second half. And Thandiwe DeShazor as Belize hit the wrong notes for me. His over the top work as Prior’s ex and current best friend — as well as a former drag queen — comes across more like a caricature than a performance.

Alexander: DeShazor has his work cut out for him. Jeffrey Wright as Belize is a tough act to follow. I liked Robert Bryan Davis’ performance more than you. It’s a challenging part to step into for a number of reasons, but partly, as with Belize, because the role was so memorably played by Al Pacino in the series. In a long impressive career, it’s Pacino’s greatest performance in my opinion. We do see, if not a likeable side of Roy Cohn, then at least a little more depth and complexity to the awfulness in Perestroika. Davis was off-the-chain as the equally reprehensible slave owner in last season’s Father Comes Home from the Wars, definitely one of the top performances I saw last year. I’m not sure if this will be taken as praise exactly, but he really does seem to have a talent for playing loathsome creeps.

Farmer: Yes — this is so in his wheelhouse. That’s the risk of reviewing half of a show — you don’t know what’s coming in the next three hours. The first half of Angels is directed by Martin Damien Wilkins and the second by Freddie Ashley. What did you think of the direction?

Alexander: I thought the pace really caught its groove deeper into the show, so in terms of directing the actors, things seem to be in the right place. I have some criticism for the overall artistic direction, though. Spoiler alert. One of the most important aspects of Angels in America is the entrance of an angel in the final scene of Part One. She’s supposed to break through the ceiling and descend, which admittedly not every theater can do, but the script actually specifies that whatever production resources a theater does have should be directed towards trying to make that entrance impressive. I don’t think Actor’s Express really followed that direction. If nothing else, Paris Sarter, who plays the angel, is left on stage having to pretend her entrance was stunning, when it clearly wasn’t. The wings looked stagey and silly. The show doesn’t require many elaborate special effects, but this one should be a knockout, or a valiant attempt. Opening night left me contemplating and listing all the reasons why a theater really should follow those directions for a special entrance.

Farmer: I agree. To me, it’s solid material from Actor’s Express, but it’s not terribly theatrical — and it needs to be, even before the angel shows up. The appearance of the angel was disappointing, indeed. Overall, I respected a lot of this yet I expected more. As a critic and fan of the show, I’m eager to see Part Two. Yet if I were a first time patron, the ending of the show wouldn’t exactly make me eager to carve out another three and a half hours to see what follows.

Alexander: That’s an interesting comment. I wondered the same thing; if I were encountering the play for the first time in this production, what would I think? Would I want to come back? It’s a fantastic script, but I have to admit I wondered if the answer might be no. I hate to go on and on about that friggin’ angel, but now that you mention it, there’s supposed to be something crucial about her appearance that will make a viewer have to come back to find out what happens. Here, the angel just looks like another apparition or hallucination, and we’ve encountered lots of those throughout the show. I would have preferred a bare set, or no set (especially when it started to malfunction), and an impressive angel, which is also the approach the script advises. Wisely, it seems.

Farmer: I don’t require an elaborate set to enjoy the show — for me the text and the characters are too involving — but I’d love to get your thoughts on how the piece holds up. I imagine, though, that’s probably something we’d be better off doing with both halves under our belt.

Alexander: Likewise. The “how’s it holding up” discussion is a big one. Not sure where I stand yet since we’re only part way through, and I found the production itself less than perfect, but I will definitely want to dig into that topic and hear your thoughts next week.

Farmer: So both of us will see the second half. Perestroika, next weekend and I look forward to discussing that as well. Get ready for the second half of the flight, Andrew! Pack well and bring warm clothes!

Alexander: Tray tables in their upright and locked position, for sure. Take care and see you at the theater soon, Jim!