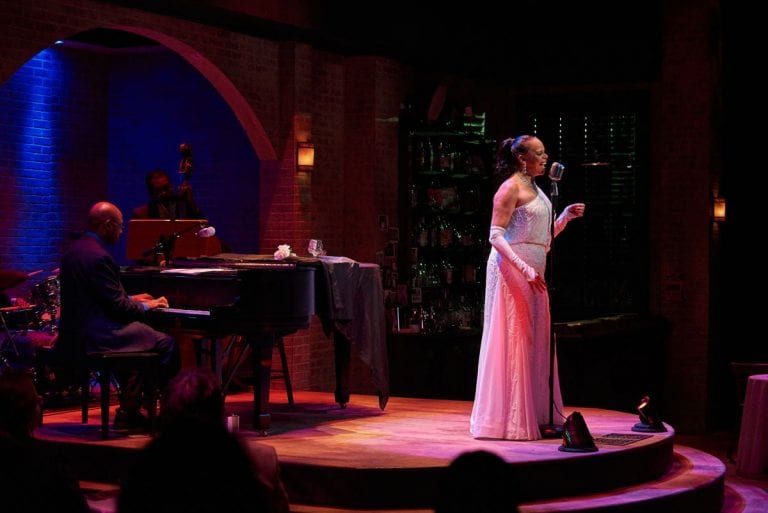 Lady Day at Emerson’s Bar and Grill is a show that could work well in nearly any venue, but it seems to fit especially snugly into Theatrical Outfit’s Balzer Theatre. The set, which is meant to suggest an old bar in Philadelphia, almost doesn’t appear to be a set at all, but a genuine extension of the theater itself. The brick walls of designers Moriah and Isabel Curley-Clay’s set mimic the brick of the evocative old building, and the functioning bar, raised platform for the musicians and cafe tables all seem somehow to always have been there.

Against this fantastic backdrop, Atlanta actress and musician Terry Burrell performs as Billie Holiday in Lanie Robertson’s play, a show that originally premiered at the Alliance in 1986 but which has recently burst back into prominence thanks to recent performances in the role by Broadway star Audra McDonald in New York and London.

The play takes place in South Philadelphia in March 1959 as Holiday performs in a seedy bar named Emerson’s in what is to be one of her last concerts before her death in July of that year. Her voice still sounds great, it seems, but her body and spirit aren’t doing as well: In the show, Holiday’s famous songs (which sound fantastic) are interspersed with stories about her difficult life.

Burrell gives us a Holiday who pops to life in surprising ways; she’s the familiar singer with the gardenia in her hair singing and smiling along to “What a Little Moonlight Can Do,” but she’s also a contrastingly streetwise, plainspoken and open-hearted woman who’s seen more than her share of difficulties. She speaks (“rambles” may be the more appropriate word at times; the script has her backing musicians struggling to get her back on track) to the audience about her battles with addiction, racism, abuse, her family, career, romance and, above all, her love of singing.

The performance is about evenly divided between music and spoken word, though the songs ultimately take precedence and emerge as the stronger half. Backed by a three-piece jazz combo, Burrell sounds enough like Billie Holiday to make the performance believable, but she also doesn’t merely offer up an imitation encased in glass. Burrell seems genuinely in the moment as a singer, unafraid to put an individual or even somewhat idiosyncratic take on a classic Holiday line. She and the musicians imbue the old songs with a sense of presence and in-the-moment live-ness, and hearing Burrell perform the songs ultimately becomes one of the show’s main pleasures. Arrive for a play, but enjoy a drink and a concert while you’re at it.

Robertson’s script tries to mesh the character’s speeches into the music in inventively colorful, evocative ways. Especially effective is a comic story about the comeuppance of a racist restaurant manager in Birmingham that precedes the somber “Strange Fruit.” Burrell also brings the character to life when she discusses her early life and complicated relationship with her mother, giving “God Bless the Child” a special resonance. But inevitably, the circumstances under which a performer is supposedly recounting her life story during a concert can feel somewhat contrived, and the situation itself is somewhat static; there’s not a lot that can really happen to a singer on stage.

Still, the show makes clear that for Holiday, the love of singing and performing seem to have remained a constant, a palliative for pain, a beacon she followed right up until the end. In her words, but even more so in the songs themselves, it’s this strength at the core of a deeply troubled woman that Burrell’s performance most vividly and memorably brings to life.