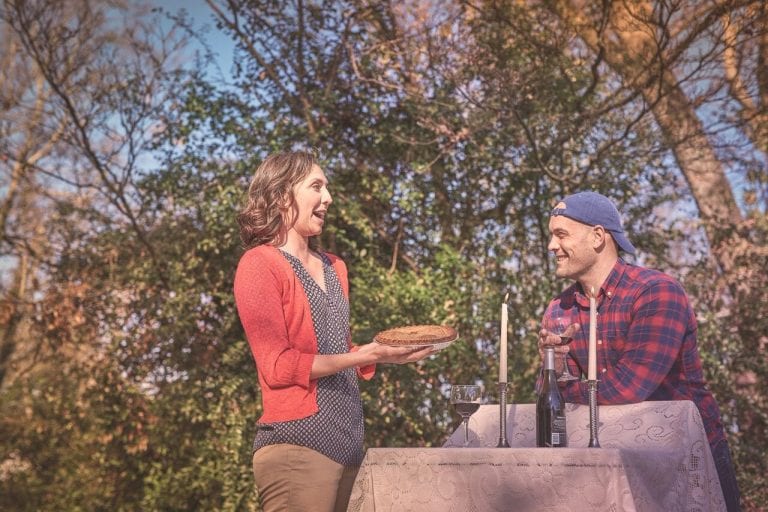 Review: Aurora’s “Maytag Virgin” charms with its strong characters and sense of place

Sweet without being suffocating and smarter and more charming than it sounds on paper, the play Maytag Virgin proves to be a splendid vehicle for its two-person cast. Running through February 11 at Aurora Theatre, it’s a crowd pleaser that never looks down at its characters or the audience.

It’s penned by Audrey Cefaly, a fairly new playwright whose work has been shaped by growing up in Alabama. She knows the South, and she knows the people she writes about.

Maytag Virgin takes place in the fictional Lenoraville, Alabama, where Lizzy Nash (Courtney Patterson) is an English teacher who has taken a year off after the tragic death of her husband. Next door to her moves Jack Key (Brad Brinkley), a fellow teacher — he teaches physics in her old room — who has also lost his wife recently. Lizzy comes over with a pie and wants to find out every detail of his life, although she seems to already know a lot. What pieces of the puzzle she hasn’t dug up yet, she will certainly ask about.

The house Jack has moved into has its share of secrets — including the death of its previous couple there — and Lizzy fills in her new neighbor with details. The two are different in a lot of ways. She is a Baptist and he a Catholic. What’s unforgivable, though, to her, is that he eventually has a Maytag dryer on his porch. She’s old school and has never found a need for a dryer, using an outdoor clothesline.

It’s all a bit quirky and sounds trite, but it’s not. What humanizes this is the respect and nuances Cefaly has for her two characters. Directed by Melissa Foulger with just the right tone, Maytag Virgin has characters who are old souls in a sense. For instance, Jack is the type who doesn’t really cotton to texting; he’d prefer actual talking. As well, both characters have scars and are reluctant to open up completely to each other, although the attraction is obvious.

As for Lizzy, she’s chipper and funny, but there’s a sad streak in her. She has no family around, except in Savannah, and when pressed about what she likes the most about her school, she admits it’s the noise and the flurry of activity, two things missing from her current life. Of course, too, there’s the issue of her husband’s demise.

The play wouldn’t work at all if it didn’t have appealing performers. Brinkley, most recently seen in Horizon Theatre’s How to Use a Knife, is not as prolific on Atlanta stages as his costar, but he seems very much at home here. His Jack (called Mr. Key by Lizzy) is dealing with his own demons, but can’t deny the feelings he starts to have for his angst-filled neighbor. Their tentative dance is subtly, carefully orchestrated.

He’s also sexy without being aware of it. As Lizzy sits outside and notices him walking indoors bare-chested, she takes a breath and does a double take. She’s not the only one.

For her part, Patterson is simply glorious. She brings a slightly off-kilter sensibility to Lizzy and is complex and unsure of herself. She’s self-deprecating — and the death of her husband has aged her more emotionally than physically. Patterson has a rather lengthy scene where she drinks a bit too much and talks about how her husband has died that’s probably the best 15 minutes of her long, steady career.

The set by Isabel and Moriah Curley-Clay is superb even by their standards, with houses literally next to each other, Lizzy’s with all sorts of ornate decorations and porch hangings and his a work in progress, boxes strewn all over the lawn and porch, changing almost daily.

Maytag Virgin isn’t a perfect play, as Act II gets a little heavier and Cefaly lets it ramble a bit.

I caught this show the afternoon after I caught the first half of Actor’s Express’ Angels in America — and found it to be the perfect tonic to that work. It’s light but deep. The question here isn’t whether Lizzy and Jack will wind up with each other but when. Maytag Virgin has its share of predictable moments, but the ending feels deserved, and Patterson and Brinkley’s lived-in performances make this an unexpected treat.