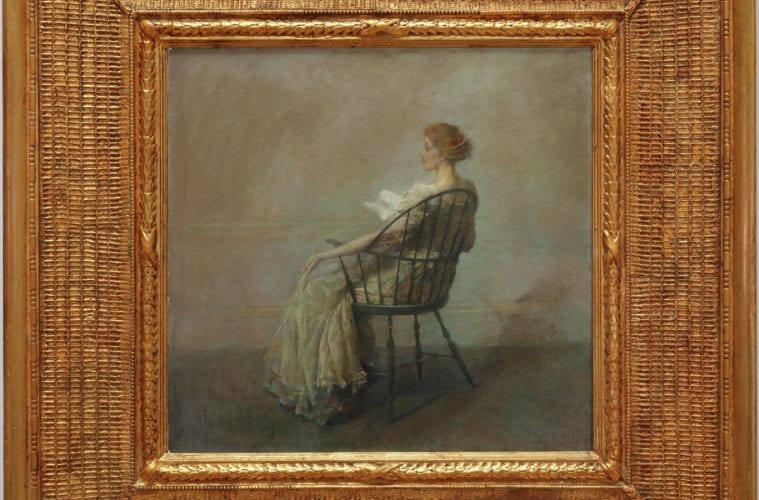 American painter Thomas Wilmer Dewing’s circa 1909 work A Reading was recently acquired by the High Museum and is currently on view on the third level of the High’s Stent Family Wing.

The refined but somewhat mysterious and distant female figure of A Reading is typical of Dewing’s work, which often depicts similar women in evocatively ethereal surroundings, seated, playing instruments, writing letters, reading or engaging in other quiet, contemplative activities.

Dewing was born in Boston, Massachusetts, in 1851, and was a lithographic apprentice as a boy. He studied at the Académie Julian in Paris, learning the classic academic painting techniques prevalent at the time. He returned to the United States and established a successful career as a painter, becoming best-known for his tonalist works, a genre of American art rooted in English aestheticism. He died in New York in 1938. The first major retrospective of his works showed at the Brooklyn Museum of Art, the National Museum of American Art in Washington, DC, and the Detroit Institute of Arts in 1996 and 1997.

A November 6 seminar at the High Museum exploring Dewing’s career and the new acquisition is currently sold out, but the painting is now on view for all museum visitors to enjoy as part of the permanent collection.

The acquisition and seminar were made possible through a gift from Atlanta’s Sara Giles Moore Foundation. (Disclosure: Sara Giles Moore is also a supporter of ArtsATL.)  Moore was a longtime supporter of the High who served on its board of directors; A Reading currently hangs in the gallery named in her honor and in honor of her husband, O. Ray Moore.