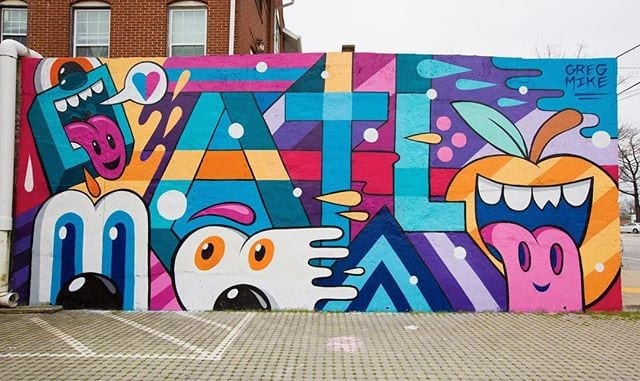 The words “Coca-Cola” and “new flavor” can still send shudders through the spines of many Atlantans, but the recent roll-out of Georgia Peach Coke seems to have gone relatively smoothly, thanks in part to the participation of some local artists. Although we at ArtsATL aren’t normally inclined to imbibe the fizzy stuff, we couldn’t help but be charmed by the clever way that the recent release of the new drink melds together so many signature aspects of the city we love: the iconic Coke bottle, Georgia peaches and colorful street art. 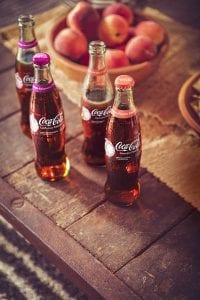 Designed and packaged in Coca-Cola’s classic 12-ounce contour glass bottles and sweetened with cane sugar, Coca-Cola Georgia Peach and companion flavor Coca-Cola California Raspberry each combine the taste of Coca-Cola with a local flavor: peaches sourced from Georgia and raspberries sourced from California. The company says it hopes to capitalize on the growing popularity of locally crafted sodas and build on the success of cane sugar-sweetened Coca-Cola from Mexico, which the company began importing into the US in 2006 and has posted solid growth ever since.

For the Georgia release, Coca-Cola collaborated with local artist Greg Mike in the creation of a colorful mural at 537 Ponce de Leon Avenue to celebrate the release of the new flavor. Designer Trish Andersen also hand-tufted a mural at SCAD Atlanta’s 1600 building, weaving in inspiration from her hometown of Dalton, Georgia, the carpet capital of the world, as well as the peach color of Coca-Cola Georgia Peach.

The fun release events put us in mind of the far clumsier 1985 roll-out of New Coke, and the reaction of then Atlanta-resident artist RuPaul. The future Supermodel singer and Drag Race host was, along with other cast members of eccentric local access cable television show The American Music Show, among the first to protest the changing of the classic Coke formula.

Video of a then-unknown RuPaul and friends dumping a two-liter bottle of New Coke into the Atlanta streets at a release event downtown was picked up by international news organizations and broadcast around the world, the old-school equivalent of going viral. As the video title implies, perhaps RuPaul can add to his impressive list of credits the fact that he helped save the real taste of Coca-Cola. You can learn more about this unusual corner of Atlanta history and more at local cinéaste organization Film Love’s ongoing retrospective screening of American Music Show episodes this spring.