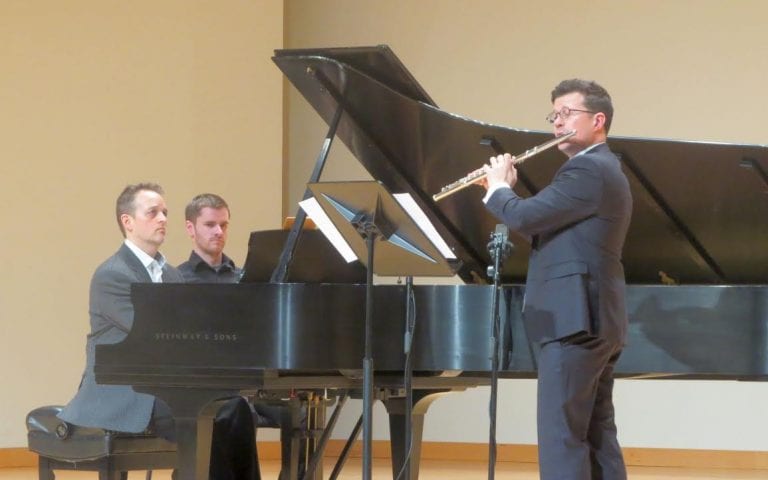 On Monday evening, flutist Todd Skitch performed in a recital of music by Taffanel, C.P.E Bach, Gaubert, Reinecke and Liebermann with Robert Henry as collaborative pianist at Morgan Concert Hall, in Kennesaw State University’s Bailey Performance Center. Skitch, a flutist with the Atlanta Symphony Orchestra, is an artist in residence at the university, and Henry is director of piano studies and assistant professor of music there. The free concert was simultaneously streamed live over the Internet.

It proved a pleasantly enjoyable, emotionally positive concert for what had been an overcast, on-and-off drizzly day that couldn’t make up its mind about which season it was in, hanging on to a vestige of winter misery. But this recital brightened up that mood. Across its compass, Skitch’s playing exhibited a lower register with well-rounded tone that was not hollow, a vibrantly singing middle register and an upper register that was bright and clear but not in the least bit shrill.

Skitch plays a mid-1980s solid silver flute made by renowned American flute-maker Jack Moore. His accomplice for the evening, Robert Henry, has long proven himself a fine collaborative pianist, and demonstrated well his skill at bringing important singing lines in his part to the fore without overshadowing Skitch’s flute.

The mostly sunny repertoire list was like a connoisseur’s menu for flute fans. While the composers represented are overall not in the Who’s Who of names among more general classical music mavens, they are well-recognized hit-makers within the devoted inner circles of classical flutedom; all of the five works on the program are well-established within the core of flute repertoire.

Skitch and Henry opened the program with “Andante Pastoral et Scherzettino” by 19th-century French flutist and composer Paul Taffanel. Taffanel was considered the foremost flutist of his time and is credited with founding the French school of flute playing, which was the dominant influence on composition and performance style for the instrument over much of the 20th century. “Andante Pastoral et Scherzettino” was written in 1907, the year before Taffanel’s death at age 64. He dedicated it to Philippe Gaubert, one of his students and another distinguished French flutist and composer of flute music, whose “Fantaisie” Skitch and Henry would play later to close the recital’s first half.

In between, Skitch returned to the stage alone to play a piece for unaccompanied flute, the Sonata in A minor, H562, by Carl Philipp Emanuel Bach (1714–1788). C.P.E. Bach, one of the many sons of J.S. Bach, is perhaps best known for his vast number of works for keyboard instruments, but he is also a favorite of flutists. His expansive catalog of works includes six extant flute concertos, another 10 lost to history, and 22 flute sonatas, many with “basso continuo” (keyboard and a bass instrument), but this one written for “flauto traverso solo senza basso” — unaccompanied. Unhurried in his performance, Skitch effectively brought out the moments of implied secondary voices in the music.

After a brief intermission, Skitch and Henry opened the second half with the most substantial work on the program, the Sonata for Flute and Piano, Op. 167 (“Sonata Undine”) by Carl Reinecke, a Danish-born 19th-century German composer, conductor and pianist who was a contemporary of Taffanel. Although 20 years older, he outlived the French flutist by a couple of years. Reinecke is best remembered today for composing this sonata, but was overall a highly visible and influential musician and teacher in his day. Among his students were composers Edvard Grieg, Leoš Janáček, Isaac Albéniz and Max Bruch.

Although inspired by the fairy-tale novella Undine by Friedrich de la Motte Fouqué, about a water sprite, Reinecke’s sonata is not programmatic music, but he does capture a water-like character without the heavy deliberateness of tone painting. Skitch and Henry were able to render well that fluid quality in their performance.

For the final work of the evening, Skitch turned to another unaccompanied work, this time by a living composer: Lowell Liebermann’s “Soliloquy for Solo Flute” (1993). Its opening theme imparted an initial feeling of mystery, and its overall character is one of refined lyricism. Liebermann is more of a traditionalist than innovator, but his music is appealing. It seems to also suit Skitch’s playing and temperament very well, with the final note of the work hanging peacefully in the air before dissolving into a calm, contemplative silence.