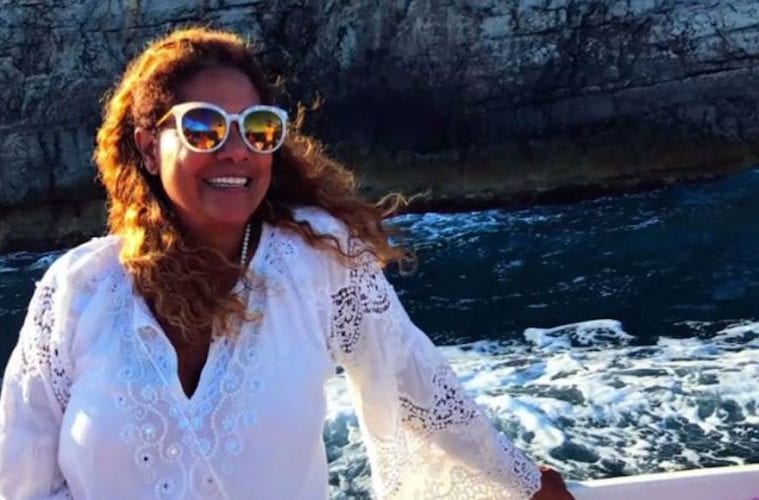 “There is no death, daughter. People die only when we forget them,” my mother explained shortly before she left me. “If you can remember me, I will be with you always.”

There is a proverb in Latin American culture which posits that we die three deaths. First, when our heart stops beating. Second, when our body is placed in the ground. And third, when our name is no longer spoken by those who knew and loved us.

By this measure, family and friends are missing Heather Vincent Holley, but we have not lost her.

Heather, 58, suffered a heart attack aboard a flight from Sarasota to Atlanta last Thursday afternoon. She is survived by her husband, Kenny Holley, their twins, Cary and Robbie, her brother, Dr. Chuck Vincent and extended family from Detroit. Heather Vincent Holley was a vocal supporter of the arts.

Her decision to relocate from New York’s tri-state area — where she worked with the news magazine 20/20 and the hidden camera program What Would You Do? at ABC News — to Atlanta in 2009 wasn’t easy. But she quickly found her tribe within Atlanta’s arts and culture community, where she served on the boards of ArtsATL, the National Black Arts Festival, the Alliance Theater and the AIDS Memorial Quilt.

Kenzie Biggins, board chair at ArtsATL, who extended the invitation for Heather to serve after identifying a kindred spirit, said, “Heather was full of life, and she sincerely loved her family, her friends, and the arts. She could be spotted at any number of arts events not only supporting the organization but truly enjoying herself. Her business savvy and wealth of experience made her a highly valued member of the board and a key part of our transition team. We will all miss Heather’s energy and loving stories about her twins.”

As an art collector and patron, Heather’s tastes were omnivorous. Attending live performances with her was never dull because she was the kind of audience member who gave as good as she got. She was responsive in real time: whether keeping the beat with her hands and feet in a concert hall, or nodding in agreement whenever an actor’s words struck a chord with her at the theater. Final curtains never marked the end of an experience for Heather. To the contrary, as countless friends can attest, if she saw something that really fired her up, she would insist that you had to go in her inevitable barrage of morning-after phone calls, texts and emails. And her taste was unerring.

For all her connoisseurship in the arts, there was no greater champion of nor more enthusiastic cheerleader for emerging talent. Heather valued a free seat at the Alliance Theatre’s Kendeda Week — featuring annual free readings of finalists from the Alliance/Kendeda National Graduate Playwriting Competition — as much as she did scoring astronomically priced tickets to Hamilton on Broadway. She did not distinguish between high versus low, established versus emerging or fine versus folk art.

If it was compelling, if it was original, if it had a point of view that rocked her world — Heather was all in.

When I was invited to drop by the Ansley Park home of Stephanie Russell after Heather’s death, where her family and friends had gathered to plan her wake, funeral service and burial, I didn’t know what to expect. But what I found was life-affirming. The room was pulsating with love, laughter and a sense of gratitude for having shared time and space on the planet with Heather. Her life was marked by curiosity and a sense of adventure.

Her husband and brother were the only men in the company of about a dozen women. The group comprised Heather’s first cousin, Aubyn Thomas (who could pass for an identical twin sister), Midtown neighbors, fellow book club members and long-standing travel buddies. The camaraderie they shared attests to their beloved friend’s status as a girls’ girl who was a master at connecting her disparate social circles with one another. Meanwhile, their setup — which looked like Mission Control with its mix of laptops, notebooks, seating charts, graphs and photographs chronicling Heather’s life from birth to present day — would have made their friend, a 30-year veteran of network television news, proud.

Heather began her career at ABC News’ Nightline, where she worked directly with Ted Koppel to book guests for the late night program. While there, she covered a wide range of stories including Nelson Mandela’s release from prison, the anniversary of the Fall of Saigon and The Intifada in Israel. She was honored for her work in Israel with a duPont-Columbia Silver Baton Award for the ABC series Nightline: In the Holy Land. And her work at Nightline was also honored with seven Emmy Awards.

Professional bona fides aside, Heather’s former colleagues say her most outstanding characteristics were her easy laughter, commitment to hard work and fair-mindedness as a boss. Her own then-boss, Koppel, loved telling the story about the time he overheard Heather — whom he characterized as “to the manor born” — on the phone with a potential guest she was trying to book for the show. Apparently, the person on the other end of the line said something that crossed a line for Heather, who held herself and others to the highest standards of decency and civility in the workplace. The retort was a moment that lives on in workplace infamy, as Koppel later recalled that Heather was the first human being he’d ever heard who uttered the phrase, “Now see here, motherfucker!”

She was so beloved at ABC News, that well over a decade after her departure from the network, they paid tribute to her at the close of Nightline’s broadcast on Monday night, just four days after her passing.

Following her tenure at ABC, Heather served as a senior supervising producer of the news magazine Dateline for NBC News; vice president at MSNBC — where she created shows, specials and overall programming content; and covered Republican and Democratic conventions for CBS News and BET. She also worked around the world with the international women empowerment organization Vital Voices, leading media training sessions for women in business, elected officials and those working for change. Holley (pictured with her parents and her brother, Chuck) grew up in Detroit.

“Early in her career, she was so intense about the media that she had three televisions and a short wave radio to wake up to just to get the scoop on world news,” said her brother, Chuck Vincent. “She was a fearless skiier who would launch down a double black diamond run in Aspen, or Vail, just to prove I hadn’t gotten that much better than she was.”

First and foremost, though, Heather was her family’s memory-keeper. “My grandmother and mother were the family historians, and Heather was the next holder of that tradition,” said Chuck. “She even took things a step further by tracing our lineage through genealogy.”

“Heather could relate to anybody from anywhere because she’s had so many different life experiences,” said Terri Borden. “She could hold her own in any conversation, was an avid reader, accomplished gardener, well-versed and well-traveled. I took vacations with her annually for 13 years, and Heather was the type of woman who would rip a worm in half to bait her hook, catch a fish, gut it, scale it and cook it for dinner. She made jewelry. And when the Women’s March on Washington was announced following the 2016 elections, Heather knit everyone in this room a pink pussycat hat and shipped them to us across the country so we could represent in Los Angeles, Detroit, New York and Atlanta.”

True to her TV producing roots, Heather was resourceful as hell. If you needed a chiropractor, or a humane trap set to catch a squirrel in your attic, or a playlist for anything from a cocktail party to something to calm your nerves, she was Janey-on-the-spot. (Her favorite Pandora station, when she wanted to chill, was Tuck & Patti Radio.) If you complimented her on a striking pair of chandelier earrings, she would tell you who designed them, where to find them and when to look out for the next sale. (To this day, I cannot walk into an Alexis Bittar boutique without thinking of Heather.)

When I asked what her hobbies were, Kenny — the George Burns to Heather’s Gracie Allen over the course of their 22-year marriage — did not miss a beat.

“Would getting on my nerves count?” he deadpanned, to the laughter of her crew. To know Heather and Kenny as a couple was to know the futility of trying to determine which of the two would have had the bigger career as a stand-up comic. “They were so funny together,” said Stephanie Russell, to nods of agreement all around. “They would feed off each other, interrupt one another with, ‘No no no! I’m telling the story because I tell it better!’ or ‘No, Kenny! You tell it better!’”

This crew had heard it all before. But when Kenny launched into one of their favorites stories, the one about his honeymoon in the South of France with Heather, the amen chorus kicked in:

Ooooh! I know this story!

I know what you’re gonna saaaaaay!!!

A Francophile who studied in France, is fluent in French, and has lived in Francophone African countries, Kenny asked his bride what she wanted to do on their third day in paradise. When she replied, “I’d like to have lunch at Le Moulin de Mougins,” their hotel concierge arranged for a car and driver to ferry the pair to what looked like a private home — where they enjoyed an unforgettable meal and wine pairings. “First of all, the waiter can’t look me in the eye when presenting the bill — which is affixed with wax seal,” said Kenny. “I crack it open, and I’m like Oh my god! Sweetie, where the hell did you find out about this place?”

Barbara said, whenever you’re in the South of France, you probably want to go to Le Moulin de Mougins, came Heather’s sweet reply.

“And that’s when my wife of four days said the most frightening thing she said in all of our marriage,” Kenny related: Well, of course we can. You just paid the bill!”

On TV, this would be the part of the show where George would turn to his wife and tell her, Say goodnight, Gracie. And Gracie would look into the camera and say, Goodnight, Gracie.

But this is real life. And even as those who loved Heather Vincent Holley are compelled to say, “Goodnight, Sweet Princess,” although we are missing her, we have not lost her.