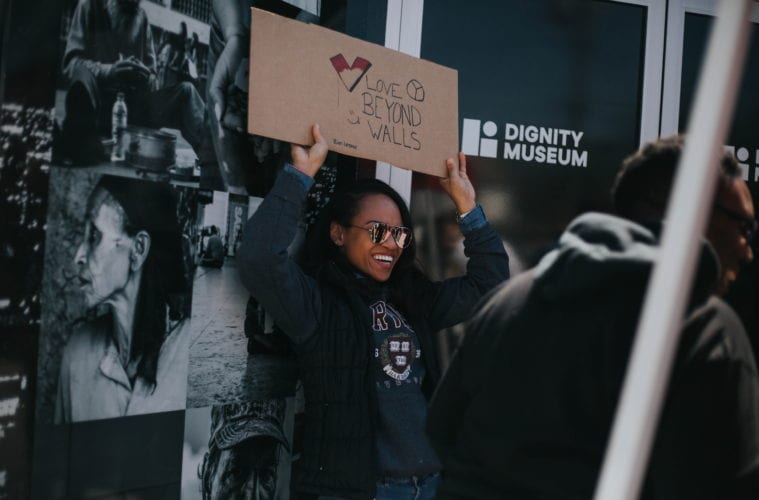 In its first week of life, Atlanta’s Dignity Museum welcomed more than 400 visitors and received responses from people in 15 states who want it to visit them.

The traveling museum shares the stories of forgotten people inside a fire-engine-red shipping container just outside Downtown Atlanta in College Park. It fuses storytelling, interactive technology, research and exhibitions with the goal of challenging our humanity by focusing on the issue of homelessness.

The privately funded, family-friendly space opened March 23 and will hit the road at some point. Just when isn’t clear yet, but executive director Terence Lester says its movability is key. The premise is to take it around metro Atlanta and place it in “some cool area where we can be disruptive.” It also may roost at one or more universities and find unconventional sites that will help grow its social, educational and community components.

The museum is housed in a shipping container because, like every homeless person, every container has a story, is transient and carries things that have worth and value.

The idea for the Dignity Museum began germinating in 2004 when Lester and wife Cecilia gathered two trash bags of clothing and began walking through downtown Atlanta. On Auburn Avenue, they met a homeless woman and asked if she knew anyone who needed clothes or shoes.

She did, she said. While rummaging through the bags, she found a pair of black shoes and rejoiced. “I just prayed for a pair of shoes last night,” she said, “and God answered.”

That’s when the “Love Beyond Walls” concept was born.

In 2013, Terence Lester turned the concept into a nonprofit of the same name. Then with his family’s OK, he lived for a time as a homeless man. He wanted to understand the lives of homeless people and, like many, was put out of shelters and restaurants, slept beneath bridges, ate handouts, begged for money and stayed awake for days at a time.

Since then, Love Beyond Walls — which is the Dignity Museum’s parent organization — has worked to raise awareness about homelessness and mobilize volunteers to serve vulnerable citizens.

“People think homelessness is just a localized issue relevant to metropolitan cities where people hang out on the corners,” Terence Lester says. “Instead of having empathy, many people respond with resentment. What I’m advocating is for people to have much more of a global view of the issue. To go deeper, understand more and be inspired to give of themselves.”

He sees the Dignity Museum as an opportunity to share the personal stories of those who “struggle differently.” It allows us to remove blinders, albeit consciously or unconsciously, he says, and break down fictitious walls. 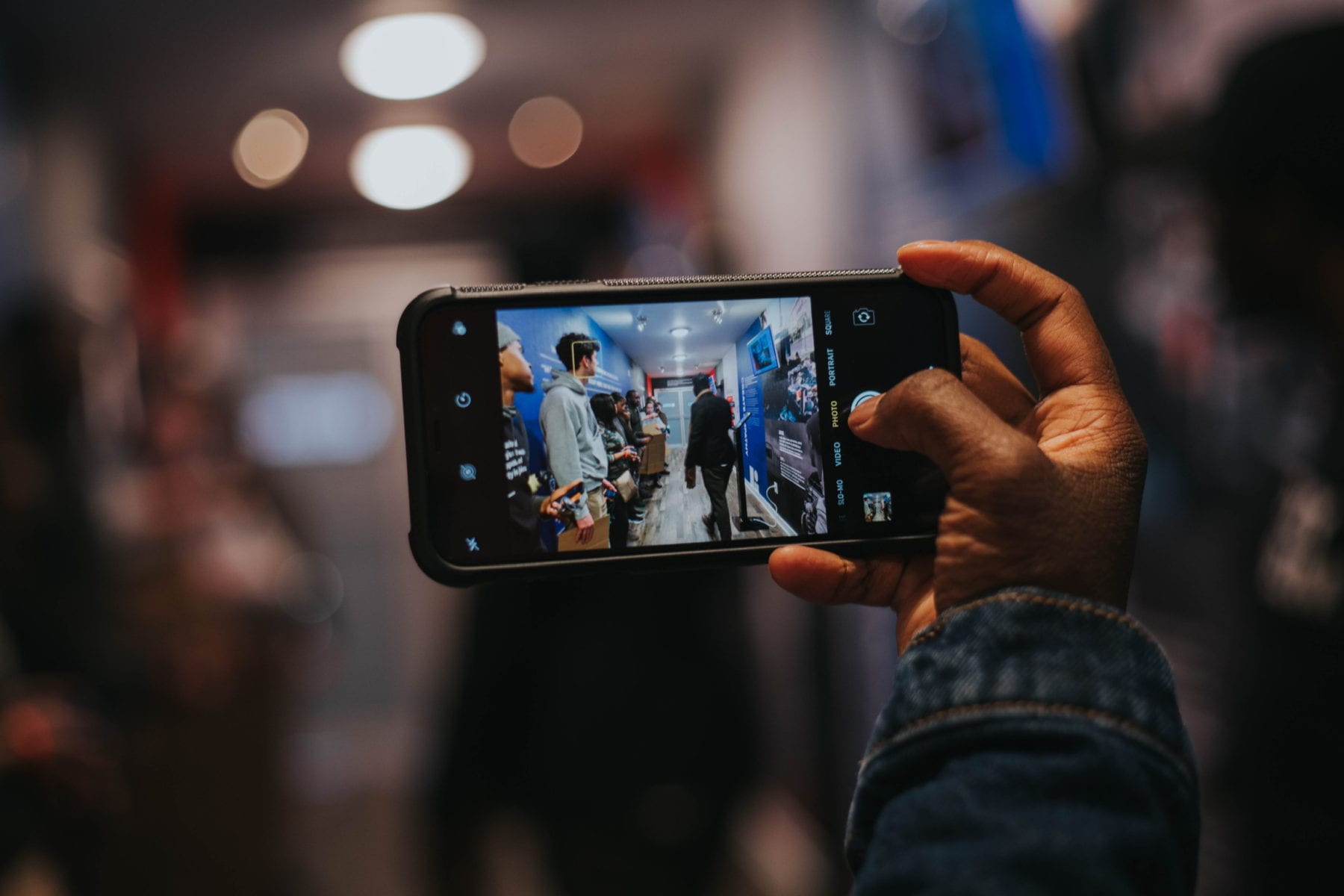 Visitors are asked to bring fully charged smartphones and earbuds with them for the interactive portions of the tour, led by guides called “social practitioners.”

Think of the Dignity Museum as a means of disrupting humanity — on purpose. Visitors should schedule a tour online (available 10 a.m.–1 p.m. on Wednesdays, for now). They last an hour or more and are free, but donations are welcome. You’re asked to bring a fully charged smartphone and earbuds for interactive portions of the tour, led by guides (aka “social practitioners”).

Quote: “I have a degree in biology. I’m not stupid.”

The photos show hands at prayer or people lying on the street or seeking shelter. 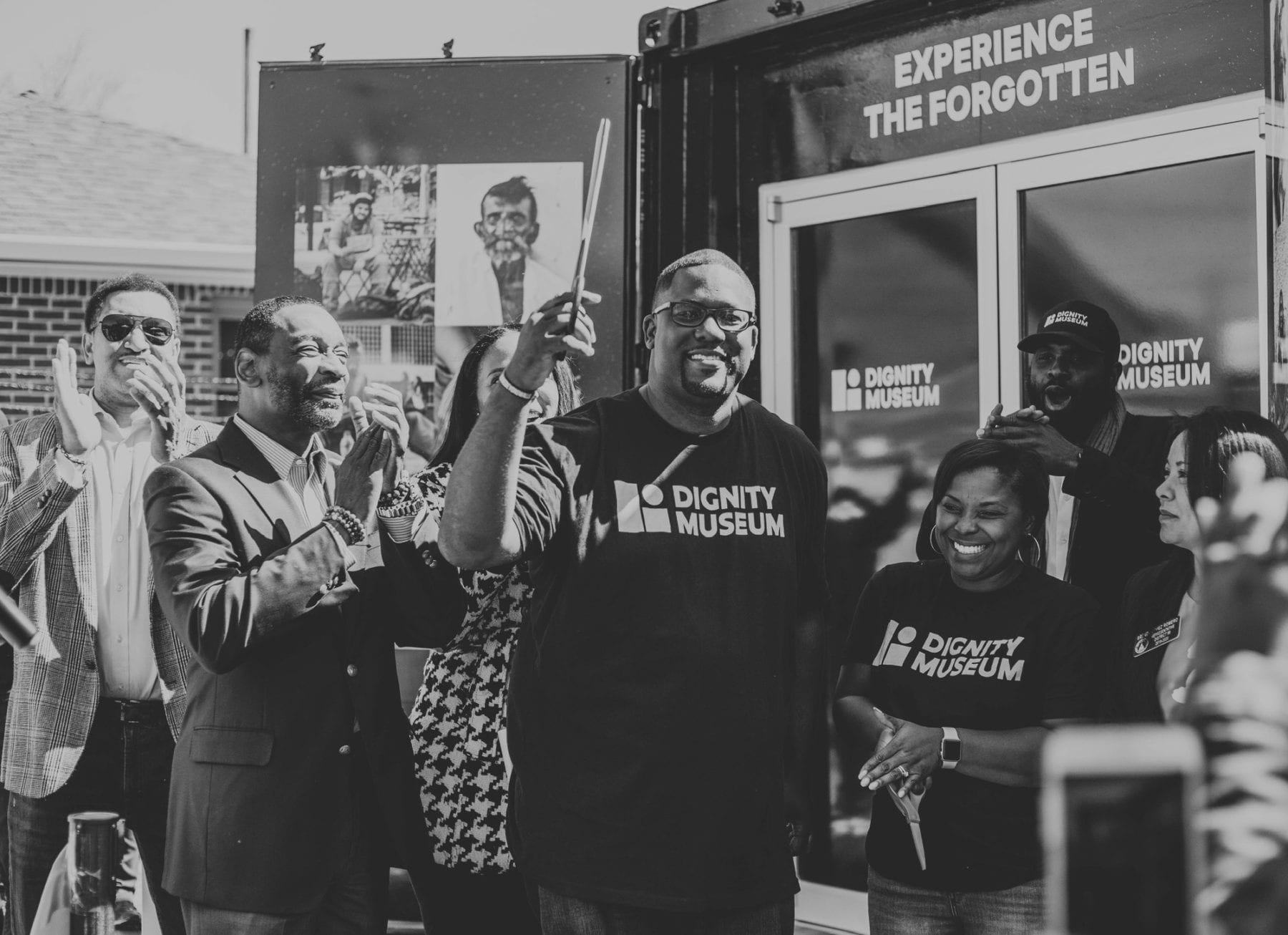 Terence and Cecilia Lester (center) celebrate with friends, family and supporters as the ribbon is cut at the new museum.

You’ll have some alone time to spend in one or all three of the museum’s sections: “Challenge,” “Empathy” and “Inspire Action.” QR code-accessible videos and audios tell stories of people who’ve been homeless and share intimate details. Sam, for example, is a retired military veteran who’s been unable to get his benefits. He often sleeps next to exhaust pipes to stay warm.

Activities are available too. You can make your own cardboard sign — one that you’d use if you were on the street. You might be asked: What would you say if you needed medication or your child hadn’t eaten?

A movement of doers

The early impact of the museum seems clear. “At first I thought homeless people just got kicked out,” eight-year-old Joy H. says after her tour. “Now I’ll try to give one or two dollars.” Her 13-year-old brother, Miles, says he’ll advocate more for the homeless. “It’s not always their fault,” he says. “I have empathy. I have even more now.”

Terence Lester says the goal is to create an experience that will hold people’s attention. The museum’s interior can be changed out, and future exhibitions may focus on teen homelessness, hunger or the transition from mass incarceration.

Remember, he says, being homeless doesn’t mean you’re nameless. The Dignity Museum and Love Beyond Walls’ desire is to inspire action. It says so on the Lesters’ and museum volunteers T-shirts: “A Movement of Doers.”