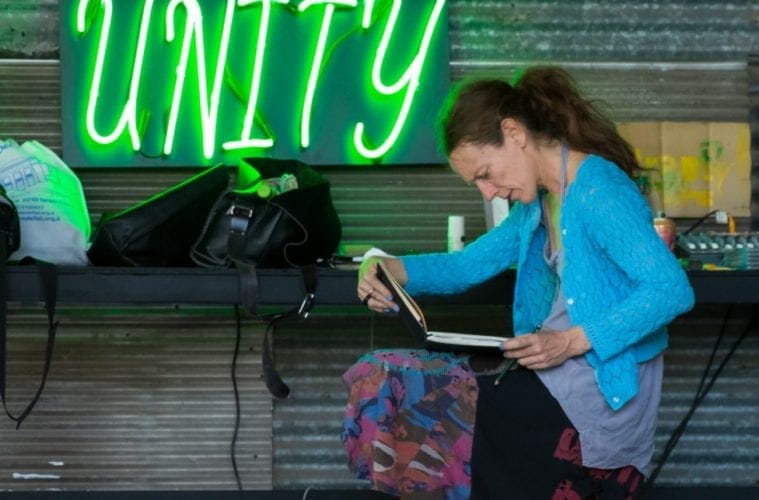 Lauri Stallings becomes the first choreographer named an artist-in-residence at the High Museum of Art. (Photo by Thom Baker)

Lauri Stallings, glo mix it up at High Museum with new suite of activity

When the moving artists of glo occupy Peachtree Street in front of the High Museum of Art at 12:30 p.m. Thursday, the public initiative will mark the movement company’s 10th anniversary and a first for the High, which has commissioned glo founder Lauri Stallings to be its first choreographer as artist-in-residence.

Stallings will create Supple Means of Connection, a new suite of live art and movement installations designed for the High’s galleries.

“The word choreography means to draw in space,” says Stallings. “By offering visitors an alternative spatial experience of the museum, I want to blur the line between professional performers and visitors, and remind folks of the beautiful companionship that can emerge when total strangers share a common experience.”

High director Rand Suffolk sees Stallings as an ideal partner in his plan to help visitors reimagine what a trip to the museum might look like. He has no idea what to expect from the glo performances, continuing on a rotating schedule through August 3, but he can’t wait to see how they will unfold. The residency will conclude September 8. “I see choreography as a tangible tool for bonding people and bringing equality to spaces,” says Lauri Stallings.

“Lauri is a unique life force in the most positive way,” says Suffolk. “It’s remarkable to see the way she harnesses creativity to create inherently compelling work from nothing. For this project, she’s drawing inspiration from the art we have on display from our permanent collection and also our architecture. Those are two of the defining elements of any visitor experience at the High Museum. Any exciting way that encourages people to see our works and, frankly, see their lives differently is a truly unique positive for us and dovetails really well with our mission.”

Suffolk’s goal aligns perfectly with glo’s mission to revitalize identity in the American South, and supports the company’s three core values that “people matter, histories survive and our bodies unite.”

Before the opening of the Supple Means exhibit, nine glo members will engage visitors through a series of newly choreographed works in shifting locations over 10 days — from Sifly Piazza outside the museum to the base of the ginkgo tree at street level, in public places, hidden spaces and overlooked vistas within the museum. Suffolk even approved Stallings’ request to raise the scrims covering all windows on the second level of the Wieland Pavilion to flood the gallery with Vitamin D.

The first things guests will see upon entering the 14,000-square-foot exhibition space will be a 35-foot-long neon sign in gold glass designed by Vyvyan Hughes that spells out Beautiful Stranger, Thank You for Coming in Stallings’ handwriting. Text, mixed-media sculpture “trees,” public artwork and furniture from glo’s former studio at the Goat Farm Arts Center will be involved. The High also has commissioned the first-edition pocket glo map and dictionary that visitors can take home as a keepsake.

In classic glo fashion, Stallings has curated a suite of installations comprising an intergenerational, interracial group of 24 local women and children, ages 9 to 89 — including playwright Pearl Cleage, performance artist Priscilla Smith and visual artist Gyun Hur — to serve as enactors, or living sculptures, to “energize” the gallery. The program includes ongoing cameos by photographer Lucinda Bunnen, whose mere presence Stallings expects will raise the bar for her dancers.

“When I told the moving artists that Lucinda was going to be doing live sculpture, you should have seen them,” says Stallings. “We call her our queen. And she will bring an element of authenticity they all feel pressured to match.”

Stallings, who will conduct the performances and not participate as a moving artist, takes great pride in the fact that the number of female artists represented in the museum will double, if not triple, every day of the six-week residency. At a recent one-on-one choreography session with Bunnen, Stallings elaborates on her concept for the women who will participate. “Some of the women aren’t literal artists,” says Stallings. “But they are women like my mother; they are all artists despite not having a web page.” Stallings’ mother, Maggie Dinkins, is a self-taught seamstress whose original designs have been worn by glo artists since the company’s inception.

Bunnen nods in agreement and adds, “They are the kind of women who have never had a show but show up for work all the time.”

When Stallings was growing up in the projects outside Gainesville, Florida, in what she describes as “this wild, strange, really tight family of bighearted, very special people,” her mother had just two rules for her four children: Go outside, and have your asses back when I ring the bell or you hear my voice.

The directives allowed Luke, Lissa, Lauri and Linc to wander in the woods without adult supervision. They forged new paths, got lost from time to time and always managed to find their way home. As they developed a heightened awareness of their environment, the children learned the value of listening, staying flexible, depending on one another and trusting their instincts.

The lessons served them well in the woods and later at the Pofahl Studios in Gainesville, where they all excelled as classically trained dancers.

Stallings says the best part of her daily commutes to dance class was “taking the city bus across the tracks to the pretty side of town,” not because she was impressed by the trappings of material wealth but because the ride allowed her to sit next to strangers for 20 minutes and coexist in harmony. In hindsight, she says, “I think a lot of marginalized people — folks who grow up with economic obstacles like we did — know the value of connection because we didn’t have a safety net. It gives you a perspective, a depth and an awareness that other people don’t necessarily need to navigate their world.” Lauri Stallings and glo will be based at the High while the Goat Farm undergoes renovations. (Courtesy of the Hudgens Center)

After leaving Florida, Stallings danced with San Jose Cleveland Ballet, Ballet BC (Vancouver) and Hubbard Street Dance Chicago. She describes choreography as a great mystery and says the discipline found her. Early on, she was commissioned to build ballets for Hubbard Street, Atlanta Ballet and American Ballet Theatre, and her output was prolific. Despite the outward markings of success, she chafed at the rigid rules of engagement that govern where and how the public enters a performance space, where they sit and their predetermined proximity to artists who are required to work at a distance.

All that changed when she founded glo in 2009, wrote her own rules and recreated the sense of discovery, surprise and connection she’d experienced as a child “dancing in the woods with my brothers and sister and seeing beauty in nature.”

Stallings still possesses a purity, sensitivity and ethereal effect that belie the hardscrabble realities of having to mix art and commerce over a three-decade-long career. Not only have her most outstanding characteristics remained undiluted, they are manifest in her expression as an artist.

“Lauri is one of the greatest artists I have ever met,” says Bunnen. “She is creative. She doesn’t talk about it. And she gets it done. She turned dance upside down and inside out with glo, and everybody went from thinking that she and her dancers were crazy to loving them. How lucky am I to be a part of her new residency at the High?!”

While the imperative to find family and cultivate kinship stems from her childhood experience as a pathfinder, Stallings primarily says it’s her civic responsibility to keep bringing people together as an artist.

“I see choreography as a tangible tool for bonding people and bringing equality to spaces,” she says. “I love the empathy that comes with a variety of individuals moving together. If we would slow down and listen more, maybe we’d be less apt to attack each other and, instead, ask ourselves, ‘How am I walking alongside someone I don’t know on a common sidewalk?’”