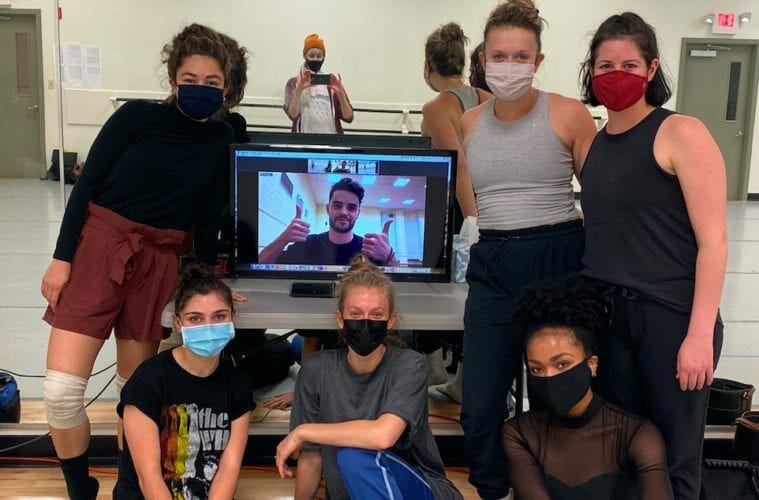 After the pandemic shut down live performances, Kit Modus established a virtual residency program and worked with choreographers such as Rubén Julliard (above) to create new pieces.

The contemporary dance company Kit Modus will close its season Sunday with VCR Session II, an 8 p.m. performance at the Callanwolde Fine Arts Center. The show — the second of Kit Modus’ virtual choreographic residency sessions — will feature the world premiere of a work by Maddie Hanson, as well as works by Alexander Espinoza, Rubén Julliard and Kit Modus founder Jillian Mitchell.

Over the course of the season, the Kit Modus dancers worked virtually with choreographers from around the world, selected by Mitchell from a pool of more than 65 applicants. The first VCR session included the premiere of Espinoza’s Ikebana and Julliard’s Outcast, along with a preview of Mitchell’s Purgatory. All three will be part of this second session, along with Hanson’s The Space that is Holding Us.

“The residencies were a fantastic way to keep our dancers moving and connect with people,” Mitchell says. “We got access [to choreographers] in a way that we might not have had normally.”

Except for Purgatory, all the works in the Session II performance were created through Zoom; however, Mitchell says it’s hard to tell, given how diligently the dancers worked with the choreographers to create a polished piece.

The virtual setting “slows you down to an extent, because you can’t physically manipulate people,” Mitchell says. “But it very much mirrored a real experience.”

The performance gives Mitchell a chance to show Purgatory one more time; she says it has grown throughout the year. She described the dance as the first she’s ever made on the spot, one that has served many purposes for her and her dancers, from being a way for them to move — literally and figuratively — out of quarantine, to serving as an avenue for her to test herself as a creator.

As Kit Modus closes the season, Mitchell says she’s equal parts excited and proud. “It’s a nice feeling,” she says about the final performance. “It gives you this accomplished sense of a punctuation mark at the end of a very, very long paragraph of work.”

Weather permitting, the four works will be performed under the stars in Callanwolde’s amphitheater. An indoor space is on standby in case of rain. Though the residencies featured choreographers from all over the globe — Julliard from France, Espinoza from Spain and Hanson from Canada — the evening’s works “pair beautifully” according to Mitchell.

Because the performance marks the end of a season largely defined by the pandemic, it can seem natural to view Kit Modus’ achievements through that lens. However, Mitchell says she hopes audiences will experience a performance that demonstrates Kit Modus’ merits separate from the events of the past year.

“If you were to remove all of the barriers to us creating our work, this season would have still been significant for us,” Mitchell says. “We did something that I would have strived to do under any circumstances. The material is good, the dancers are good, the caliber is high and we’ve got something significant to offer, period.”