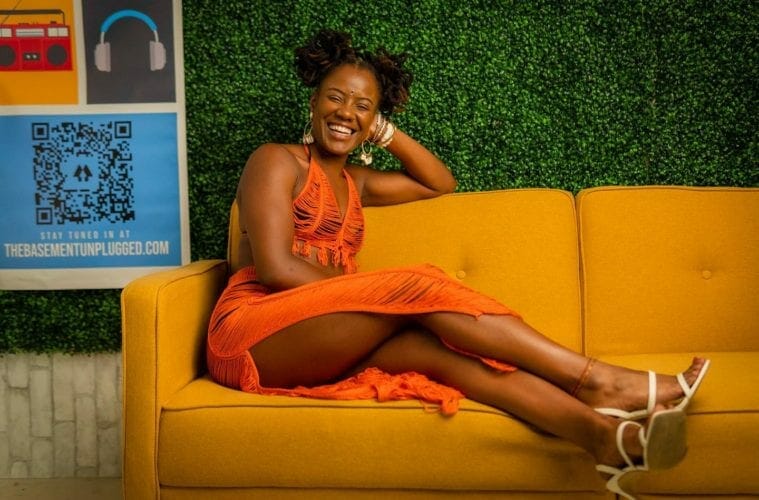 Lola Ladae: “In the Kitchen”

The last time we checked in with St. Louis native-turned-rising-Atlanta artist Lola Ladae, formerly known as Armani Swayze, she was healing from heartbreak. This track finds her in a decidedly more serene state of mind, serving up an extended metaphor for peace of mind in the form of culinary meditation.

“Let me show you some self-love / Mix two cups of ambition / Mix two cups of resilience / Now have some patience,” she sings. Her affirming, soothing new single, a collaboration with producer/musician Genius Art, aka Kalvin Hobbs, got a full-scale release party in late June at Atlanta’s Museum of Modern Perspective.

Of course, working hard on new music during a pandemic year was just one of many surprise career turns that Ladae has weathered. She originally earned a bachelor’s degree in animal science from the University of Missouri and almost enrolled in graduate school to become a veterinarian. Instead, she opted to play bass for the local band the Tulips, and the rest is history.

Remember the HBO series True Blood? This song would slide right in as a velvety sound-curtain backdrop to that early 2000’s pulpy, swampy vampire soap opera on the bayou. It invokes and savors a variety of bloodsucking images, even back to the historical Bram Stoker-penned Count Dracula, the O.G. progenitor of gothic sexiness himself.

The title of this latest single by the Vincas may also allude to the surprisingly moving 2008 Swedish horror film Let the Right One In, which focused on the bond between a young vampire and a human. Appropriately, the band’s debut album, going back to almost a decade ago, was titled Blood Bleeds.

The quartet of rockers includes front man/bassist Chris McNeal (who also plays with the band Maserati, along with Scott Kviklys and Gene Woolfolk on guitar and vocals, and Tim Payne on drums. The self-described “swamp psychedelia” has been described in a variety of colorful ways: “maniacal death-punk” with “opium den sketchiness” and “thrilling, chilling, Deep South cemetery stomp.” Bottom line, it’s a look and sound that gives us a feeling of what it’d be like if Nick Cave and David Lynch had a child together, and we’re way into that.

You can catch Vincas live at The Earl in East Atlanta on July 15.

“Model Minority,” the epic joint effort between ATL’s Alan Z and L.A.’s Jason Chu, was released in the spring. It’s the first single from their 15-track album Face Value, and dropped in the middle of Asian American and Pacific Islander Heritage Month and the wake of the horrific Atlanta spa shootings in March.

“What Alan and I wanted to do was elevate the discourse,” Chu said in a recent interview. “I think people were aware, like ‘Oh shoot, hate crimes against Asians,’ but the reality is there’s 170 years of this. It has always been going on and . . . we wanted to not only engage them in the conversation but bring new content into it to help people become aware.”

It wasn’t until Alan Z attended Emory University that he could fully embrace his lifelong passion for music. Growing up in Maryland and then moving with his family to Seattle, he often felt ostracized for what he loved to do — boxed in by his identity and the ignorance of classmates. Since then, Alan Z has worked with the likes of Full Force and Raphael Saadiq, and cites hip-hop artists Chino XL and Juelz Santana as inspirations. He released his first EP, First Time’s the Charm, in 2017, and calls this most recent endeavor “an album I’ve wanted to do my entire life, but I was just afraid to.”