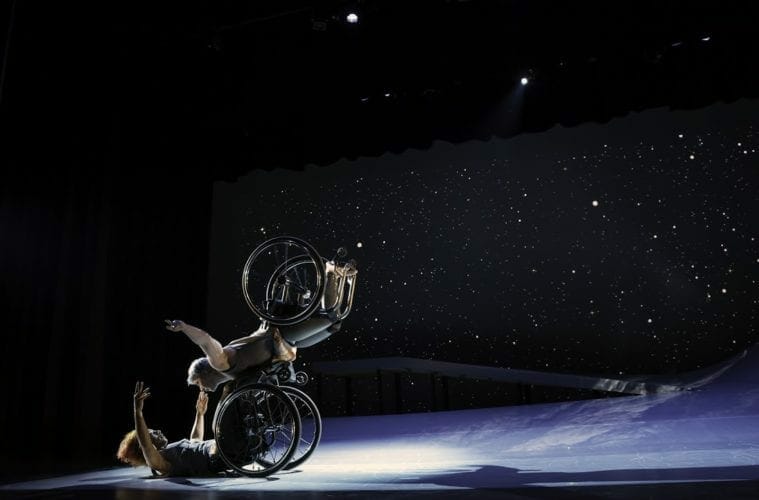 Physically integrated dance is growing and expanding in the dance world, but Kinetic Light, the first professional artistic collective in the United States comprising only disabled artists, is determinedly taking even larger steps forward.

Laurel Lawson, an Atlanta native and Full Radius Dance artist, cofounded Kinetic Light three years ago, along with dance artist Alice Sheppard and lighting and projections designer Michael Maag. Since forming in 2016, the group has created a combination of short duets and solos and large-scale, multidisciplinary, evening-length works.

Recently, they have also developed an enhanced audio description app, Audimance, that is working toward offering audiences an entirely accessible experience. Kinetic Light will grace an Atlanta stage for the first time with Descent, performed by Lawson and Sheppard at the Ferst Center for the Arts on November 23. ArtsATL recently spoke with Lawson to hear more about the inspiration behind the work.

ArtsATL: Can you speak a bit about the start of Kinetic Light? 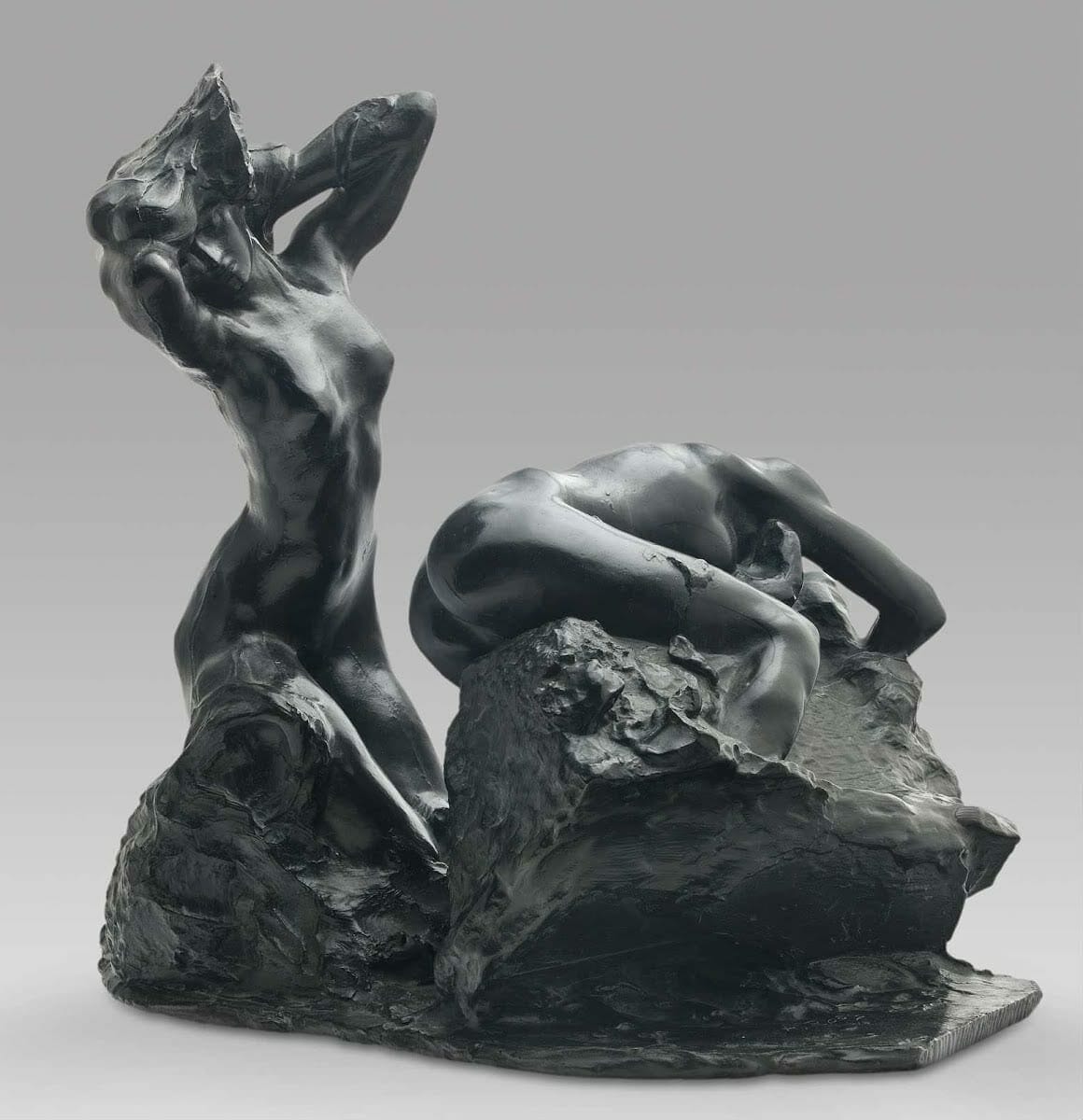 Laurel Lawson: Kinetic Light arose largely because Alice [Sheppard] and I always knew that we had work to make together as two of the senior disabled dancers, actually in the world, who are still actively making work. Some years ago, Alice encountered Michael [Maag] while on tour, and we all got together and decided to make this happen. It was just a matter of all of us coming to a point artistically and professionally where we would be able to make this kind of work. An evening-length touring production is a little daunting the first time you do it. And that’s a privilege that hasn’t been afforded to any disabled artist. That was immensely valuable to me both as a choreographer and as a dancer, to expand on my practice, working with technique for disabled dancers and working with and for equitable practice and equitable choreography in the field.

ArtsATL: What was the inspiration behind Descent?

Lawson: There were a lot of different pieces coming together there. One of the key forces behind Descent is the inspiration of [Auguste] Rodin’s sculpture, the Toilette of Venus and Andromeda. That statue is interesting academically because Venus and Andromeda have no mythology together. They’re from completely different universes. So, why did Rodin put them together? It is commonly read as a lesbian sculpture under a feminist interpretation. And Rodin was very much ahead of his time in exploring what beauty meant.

He wrote about the beauty of the disabled body. He sculpted pieces that were initially termed as grotesque, hands that to one eye may appear contorted or disfigured, but we can read those as disabled. So, Descent took as movement inspiration Rodin’s musings about beauty, and we interpreted the sculptures into movement. And of course we focused on the characters of Venus and Andromeda because that gave us free rein to create a myth. The story was something that unfolded itself to us through the choreography. It’s not something that we sat down and wrote. It’s something we really discovered through the movement.

Another way of looking at the origin of Descent is to consider the ramp (used in the piece). The ramp is what we call an artifact of aesthetic noncompliance. It is beautiful. It is a piece of art in itself. It is most determinedly not an ADA compliant ramp and is in fact so steep that we can’t quite be fully upright on it without falling. It is at the maximum steepness that we can effectively negotiate. We worked with the project team to really find that edge, that boundary, to be able to explore this surface aesthetically. 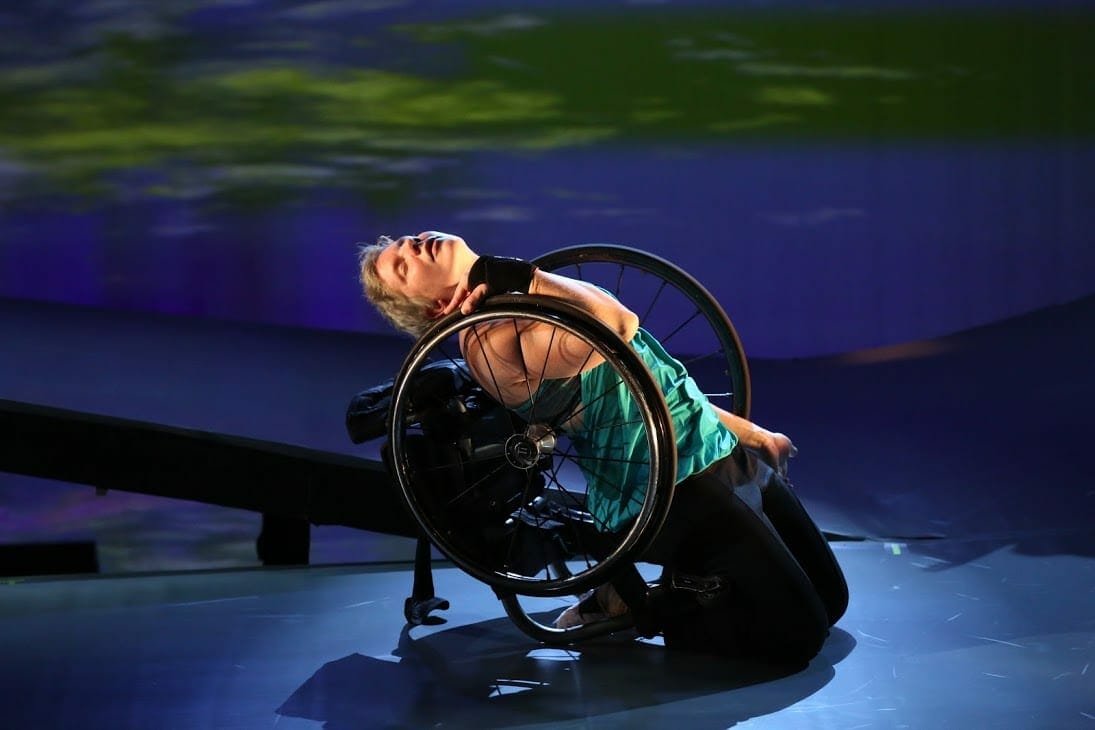 Laurel Lawson, kneeling, arches backward over her upside down wheelchair. One arm touches a wheel; the other is at her side. (Photo by MANCC/Chris Cameron)

We had to develop quite a lot of new techniques because it’s not quite like dancing on a raised stage where there is a body of known technique. Because the ramp curves and has such a changeable slope, we really had to learn how to negotiate that and learn what movement the ramp dictated to us. Adding into that is Michael’s full scrim projection, which creates an immersive world. We’re not just putting something onstage and inviting people to sit there and watch. We’re building a universe and inviting people into that universe with us to see with our eyes and feel with our bodies.

ArtsATL: What do you hope the Atlanta audience gains from Descent?

Lawson: I hope people have an experience because we’re bringing something that is outside most people’s experience. Kinetic Light is pursuing and bringing to the stage a disabled aesthetic. People go, “Well, what’s that mean?” It doesn’t mean we’re making work about disability, and it doesn’t mean we’re making work for disabled audiences. We’re making work for everyone. It does mean of course that our context, as disabled artists, affects the work that we make and how we make it. And the fact that we’re inviting people to have a little experience, to just catch the edges even, of the joy of being a wheelchair user. To have that exhilaration.

In Descent, we have two women onstage with no male normative. We have two queer women with no straight normative. We have two disabled bodies with no nondisabled referent to compare to. We’re showing an interracial love story, and there are parts of the country where that is still very powerful and edgy today. It’s not that we’re crossing boundaries. It’s that we don’t even let you know where the boundaries are — we’ve thrown them out the window. They are simply not relevant.