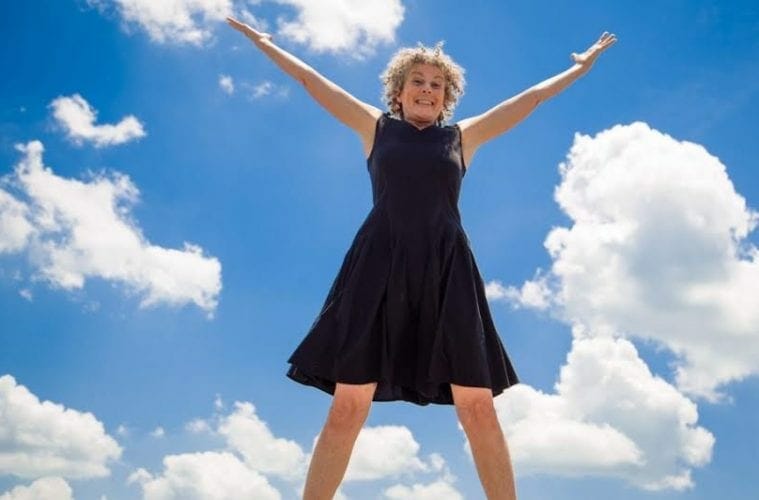 Elise Witt's unique blend of world music has helped her become one of Atlanta's most visible musical symbols. (Photos by Jessica Lily)

Ever since Elise Witt moved to Atlanta in 1977, the acclaimed folk singer, educator and activist has made it her duty to foster community through song. After decades of inviting the world to sing, Witt will celebrate the publication of her debut songbook, ALL SINGING: The Elise Witt Songbook, on November 23 at the Chosewood Ballroom.

All proceeds from the event will benefit the Global Village Project, a special-purpose and arts-infused middle school for teenage refugee girls based in Decatur, where Witt serves as director of music programs. A wide net of established Georgia singers and musicians will be featured, including Caroline Aiken, CubanaSong, David Marcus, the Global Village Chorus and more.

ALL SINGING is Witt’s first collection of original songs, with notation and lyrics in one volume. The book includes 58 original songs that span from her first album, Open the Window, to 2015’s We’re All Born Singing. Each song featured in the songbook will include music notation, lyrics and chords, as well as photos, graphics and stories about the songs and Witt’s career. The book also features Witt’s songs in English, French, Spanish, Italian and German, as well as two songs written with students at the Global Village Project — highlighting Witt’s linguistic versatility. Witt celebrates the release of “ALL SINGING: The Elise Witt Songbook” on November 23 at the Chosewood Ballroom.

Adds Witt, “It’s the only way I’m really going to write a memoir.”

Before making her mark in Atlanta, Witt was born and raised in Switzerland for the first four years of her life. According to family lore, she was singing before she began talking. She grew up with the German language before moving to the United States at four, where she first was immersed in English at nursery school. This is where the language bug first bit her and gave way to the multilingual career she’s known for.

“I’ve always been fascinated by sound and learning language,” Witt explains. “Different languages not only have different expressions but also different musicality and sound.”

She went on to study French in Lyon, France, and at the University of North Carolina in Chapel Hill. Since then, Witt’s career in the arts and education has found its bedrock in collaboration and community engagement. In 1977, she moved to Atlanta and became involved as one of the cofounders of Theatrical Outfit, the second-oldest professional theater company in the state.

As a group of young artists looking to challenge the artistic status quo in the city, they began to teach one another their respective talents in singing, dancing, acting and the like. For Witt, what began as teaching her peers how to sing evolved into hosting open classes called “Singing for the Non or Quasi Singer.”

“Through teaching, I discovered there are so many people who were told sometime in their life they were unmusical and couldn’t sing,” Witt says. “I don’t believe someone is unmusical or tone deaf; that’s a false notion.”

Since then, she’s made it her mission to make singing more accessible for those without traditional training. Over the years, she’s traveled far and wide with her vocal workshop and community singing classes called Impromptu Glorious Choruses, which foster the idea of improvisation and learning to contribute to the ensemble’s voice.

This passion for opening the door to nonsingers has brought her to New York City’s Carnegie Hall, Washington D.C.’s Kennedy Center as representative for the State of Georgia and even Nicaragua as a musical ambassador with her former band, the Small Family Orchestra. Eventually, her experience landed her at the Global Village Project in 2009. She has helped develop a curriculum using singing as a platform to teach English to students from Afghanistan, Burma, Congo, Ethiopia, Eritrea, Iraq, Malaysia, Nepal, Somalia, Syria, Tanzania and Central African Republic.

“When you learn something in a song, you never forget it,” Witt explains. “For me, singing is the best way to learn a language. When you learn the ABCs, you learned it by singing — that’s 26 different abstract concepts.”

It’s these kind of beliefs that find their way into ALL SINGING. The songbook invites the reader in with Witt’s dynamic sensibility for accessible songwriting and bringing different cultures into our traditionally Western worldview. This aspect is probably at its most prevalent with her self-described “polyrhythmic multilingual music collages,” where she takes one concept or word, translates it into different languages and adds them polyrhythmically into one cohesive piece.

“I See You With My Heart,” a highlight from the songbook to be performed at the concert, was written in collaboration with students from the Global Village Project by collecting words expressing the idea of welcome. And despite a long, fruitful career in music, Witt explains that she still finds time to learn from her students.

“One of the most important things that we say in my music classes is that every student is a teacher and every teacher is a student, and I feel that I learn as much as I do from my students as they learn from me,” Witt says. “They’ve opened up my world in such a big way. These students that I’m teaching, they’re our future. They’re what our city and world is looking like.”