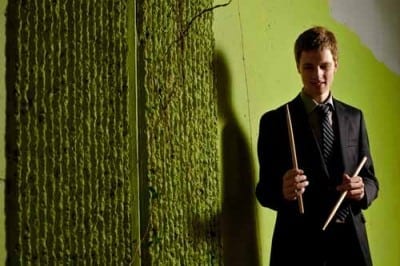 It’s a down market? Nobody told Atlanta’s jazz musicians, who continue to thrive on CD

The death of the music industry. The sun setting on CDs. I feel like I read an article every month about yet another imminent demise. But apparently Atlanta jazz artists haven’t read the same news: this summer has been a busy season for jazz releases. And, if planned recording projects are any indication, next year’s crop will be even bigger. While there aren’t many releases on the books before the end of the year, local musicians are busy recording and finishing projects. Next up will likely be the Joe Gransden Big Band’s Café 290 shows from July, set to come out on CD in November.

An invitation-only house concert by drummer Justin Chesarek (photo at left), featuring Akeem Marable on alto saxophone, Craig Shaw on bass and Ryan Rosello on guitar, will be packaged as a CD/DVD combo in December.

Singer Kemba Cofield (below) is putting the final tweaks on “Here She Comes” (Bluesback Records), a disc of original compositions. “There are a variety of different styles of music on my record,” Cofield, who expects the album to arrive in stores in the spring, wrote in a message. “This record is very passionate. You’ll feel my pain, my anger and my heart in this record.” She recorded in Augusta and in Jersey City, N.J., with trombonist Wycliffe Gordon (who even plays keyboard on a few tunes). Local pianist Tyrone Jackson also appears on the disc. Alto saxophonist Mace Hibbard will have a busy fall as well. He went into the studio last week to lay down initial tracks for his second album. (His debut, “Since Last We Met,” came out in 2007.) Joining Hibbard is his regular rhythm section — Louis Heriveaux on piano, Marc Miller on bass and Justin Varnes on drums — and trumpeter Melvin Jones. Jones, the former band director at Morehouse College, will turn the tables on Thursday, when he’ll start working on his own album for local label Turnaround Records, featuring Hibbard and Heriveaux.

The most significant CD of next year, however, most likely will be Hot Shoe Records’ all-star saxophone project. Label head Tony Wasilewski will take to the studio in the next few months with Hibbard, alto saxophonist Brian Hogans, tenor saxophonist Sam Skelton and one other horn player to create a de facto primer for the jazz saxophone in Atlanta. As it’s planned now, each artist will play a few tunes backed by a rhythm section, with the last piece reserved as a jam by the entire cast.

These anticipated new releases follow what has already been a strong year. In May, for example, flutist Bradford Rogers unveiled “Guiro,” his first disc as a leader since his 1998 debut. Gransden released “Live From Churchill Grounds” on Hot Shoe (with liner notes by yours truly) a month later, and Hogans also hit the recording scene with his debut on Turnaround.

Many of these artists frequently play in clubs around metro Atlanta. Chesarek’s band has a standing Wednesday gig at Churchill Grounds, and it’s nearly impossible to go anywhere jazz-related and not run into Gransden or a member of his band. But while these musicians are well known within the tight-knit local jazz community, these coming new recordings will help introduce them to a wider audience and serve as further proof that Atlanta’s straight-ahead recording industry is thriving.