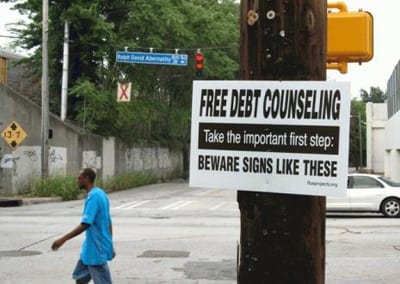 John Morse’s “Roadside Haiku” project has ruffled some feathers. Keep Atlanta Beautiful has notified sponsor Flux Projects that the installation violates a city sign ordinance and that it faces fines if the signs aren’t removed.

WSB-TV, which first reported the dust-up, presented it as a version of “But is it art?” — the creaky and deliberately provocative trope commonly used to diss contemporary art. But that’s not the point, according to Peggy Denby, director of Keep Atlanta Beautiful. Upon receiving the notice, Anne Dennington, Flux Projects executive director, called a contact in the city’s Department of Public Works to ask for guidance. Her contact confirmed the existence of the ordinance but admitted that it isn’t always enforced, especially, it seems, in benign circumstances such as neighborhoods posting announcements of community activities. The city representative did not tell her to take the signs down, Dennington says.

“Of course we didn’t intend to do something illegal,” she says, “and we never planned to leave them up indefinitely. We wanted to put art where people might encounter it in their daily lives, in this case, while driving their cars.”

Denby is right about one thing. As with the “Living Walls” exhibition of graffiti artists around town, the meaningful question is not, Is this art? For my money, it is: What is (or should be) the nature of public space in a democratic society? Which leads to more questions. Who controls it? Is consensus possible? Is community possible? What role can art play?

I certainly don’t have the answers, but I see one in Morse’s “Roadside Haiku.” If art can be a catalyst in getting us to think about what we see, what we accept in our environment and leading us to the other questions, it has a very important role to play.

The signs are scheduled to come down October 31.