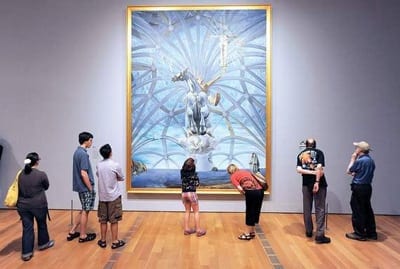 Review: Another look at the High Museum’s “Salvador Dalí: The Late Work”

ArtsCriticATL.com posted Jerry Cullum’s perspicacious review of the Dalí exhibition earlier this month. I could not resist weighing in as well. — C.F.

Any museum exhibition worth its salt, even if it’s about a familiar artist, shows us something we didn’t know. What artist has been more studied, exhibited and parsed than Picasso? Yet “Picasso Looks at Degas,” at the Sterling and Francine Clark Art Institute in Williamstown, Mass., surprised me with revelations of the extent and depth of the elder artist’s influence, even on the iconic “Demoiselles d’Avignon.” Similarly, one might imagine that there’s nothing new to be said about Salvador Dalí, or at least, for those who dismiss him as a showman and panderer, nothing of interest. The High Museum of Art’s exhibit “Salvador Dalí: The Late Work” is likely to alter that perception.

True, Dalí knew more about branding than Don Draper, and he was a huckster. But his eager and imaginative experimentation with all sorts of mediums — film and jewelry design as well as painting and photography — is worthy of respect, and, as I wrote in my AJC review, “it’s eerie how frequently his work presages future developments, from Roy Lichtenstein’s signature Ben-Day dots to Spencer Tunney’s combination of performance, photography and body art. (See ‘Voluptate Mors,’ in which the tuxedoed artist arranges nude models to form the shape of a skull.)

“The artist’s canny manipulation of media, celebrity and provocation as well as his embrace of American capitalism and consumerism live on in the careers of Andy Warhol, Jeff Koons and Takashi Murakami.”

We know that Dalí loved using his painting skills to make impossibilities like melting watches seem real. In “The Late Work,” levitation is a recurring theme. Many of the photos he made with Philippe Halsman turn on the idea of defying gravity. The Assumption of Mary is a frequent subject, which Dalí sought to explain through a cockamamie theory involving nuclear physics. The Crucifixion is airborne in “Christ of St. John of the Cross.”

One thing that didn’t rise, however, was my opinion of Dalí’s post-Surrealist paintings. From my review: “Perhaps his elaborate philosophizing stifled his expressivity. Perhaps his desire to equal his masters drove him to these flashy displays of technical prowess. The work is stiff and cold, except for ‘Christ of St. John of the Cross,’ in which he channeled his skill to convey a personal and moving reinterpretation of the iconic image.

“What a contrast to the energy and freedom of smaller-scale efforts. Examples include the lithographic series illustrating ‘Don Quixote’ and ‘Annunciation,’ a genre-bending drawing in which Mary and the angel are depicted as energy vectors, and the insouciant photographs made with Halsman. Unfettered by precedents and the need to make important painting, Dalí relaxed and let his imagination go and made the best work of the period.”

In the end, his skill, his will to experiment and his outrageous persona are more admirable than his art. To read the full review, click here.