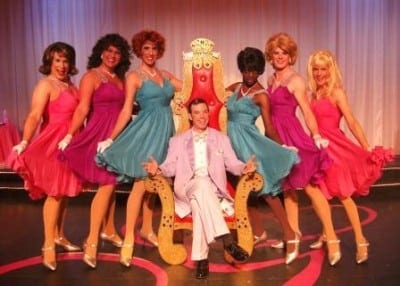 Miss Great Plains is a shy, corn-fed gal with tentative manners and a sweet disposition. Miss Industrial Northeast is a buxom Latina with Carmen Miranda fashion flair, a heart of gold and all the nimbleness of Lady Liberty. Miss Texas is a towering redhead with a hysterical hoofing and baton-twirling routine and a sultry twang that can barely disguise her killer competitive instinct.

Welcome to “Pageant: The Musical Comedy Beauty Contest!,” a giddy, pastel-colored send-up of pageant culture, the cosmetics industry and regional stereotypes. Parading its coiffed and manicured self around the 14th Street Playhouse through October 24, this throwaway bit of nonsense is about six gorgeous women vying for the title of Miss Glamouresse. (Lest you haven’t guessed already, the main gag is drag.)

With music by Albert Evans and book and lyrics by director Bill Russell and co-author Frank Kelly, “Pageant” boasts a bevy of good performances and enough laughs to fill a plus-size Glamouresse makeup case, but it’s not going to win any crown for smart writing or the breadth or depth of its material. (Glamouresse, by the way, is the name of the fictional beauty products company that sponsors the fictional pageant, and promoting those cosmetics — from “lip snack” to a device that vacuums up messy face powder spills — is a running joke.)

Except for an outburst from sunny Miss Great Plains (Dustin Lewis), whose oral essay on the rape of the land becomes a deep and personally felt feminist rant, the piece purposefully brooks no interest in speaking to the social or political issues of our time. For better or worse, it mostly steers clear of the bawdy humor and sexual innuendo normally associated with this variety of camp. “Pageant” is more silly and one-dimensional than subversively smart or offensive. It’s all about personalities — the bigger, the better. Styled, shellacked and fluffed within an inch of their lives, these contestants run through talent numbers involving roller skates and accordions (Nick Morrett as Miss Industrial Northeast), “Hee Haw”-worthy ventriloquism (Greg Bosworth as Miss Deep South) and an interpretive dance on the seven stages of life that suggests Courtney Love trapped in a recurring Japanese Noh nightmare (Ben Isabel as Miss West Coast). Emceed by the extraordinarily effervescent Frankie Cavalier (Geoffrey Brown), who maintains his self-congratulating smile long after the bubble of his laugh line has burst, “Pageant” uses a panel of audience-member “judges” to pick its nightly winner.

Chances are you’ll find Miss Deep South to be the prettiest, Miss West Coast the most catatonic and Miss Bible Belt (Bernard D. Jones, above) the sassiest. Morrett’s take on the zaftig Latina (and another role that we don’t want to spoil here) is very funny, and the actor seems more relaxed and confident here than ever I’ve seen him. I also admire the way Isabel finds the truth of his space-cadet character and never lets her go. But the real screamer here is Miss Texas (Brian Clowdus, at left), a hard-looking redhead of the Joan Crawford school, whose galumphing tap dance routine is one of the funniest bits of tomfoolery I’ve seen onstage this year. Even when she’s standing still and uttering nary a word, she’s pistol-whipping her competition with laser-sharp eyes. This statuesque man-killer doesn’t ooze sarcasm, but there’s a knowing look, a slight arching of the brow, that signals total warfare with every withering glance. Don’t mess with Texas! (Clowdus also caught our attention recently at the Serenbe Playhouse.)

Lewis, who doubles as costume designer and over-the-title producer, has a delightful time dolling up the girls with over-the-top outfits, but BJ Garmon’s sets (mostly billowing fabrics) aren’t all that impressive. From start to photo-finish, this drolly shallow “Pageant” zings along on its own dingy formula. But like lipstick and mascara, its gimmicks are purely cosmetic and have all the staying power of cheap hairspray. Poof.