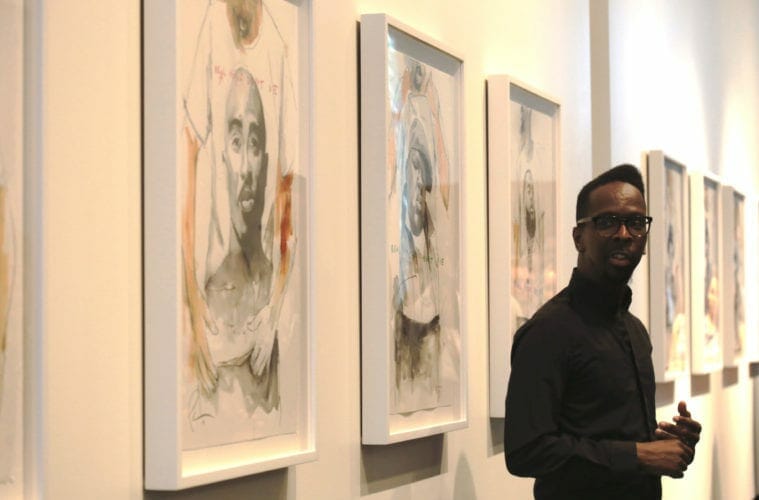 The 12 drawings here will be familiar to anyone who follows Pecou’s practice. They continue a project he began in 2013, one that’s growing into a major body of work. The drawings on paper depict Pecou’s body in T-shirts featuring public figures with powerful significance in American culture — rapper Tupac Shakur, Black Panther activist Fred Hampton, playwright Lorraine Hansberry and 17-year-old gun-violence victim Trayvon Martin among them. The T-shirts, drawn in graphite, contrast with Pecou’s skin, which is bathed in color. Pecou’s images explore an African American mourning tradition. Whether a close loved one, a community member or a public figure has died, T-shirts function as an accessible platform to honor them, spread awareness and assert political positions.

By putting the shirts on his body, Pecou makes public his mourning and shares it with communities across the world. While these images are his creation, similar T-shirts can be seen throughout Atlanta. In deceptively passive solidarity, the T-shirt and other wearable markers of mourning glorify those depicted. Over time, this makes them less human and more divine.

Pecou knows the power these T-shirts carry and uses his drawings to respond to and confront death. Civil rights leaders and victims of gun and police violence are put in the same conversation. The influences of their lives and deaths continue long after they’ve been buried.

Though death and violence can be debilitating, Pecou contends with perceptions of death by claiming it can be transcendent. Death isn’t the end. By referencing traditional West African spirituality, he reveals how these figures are much more than physical bodies. They have moved humanity forward and, in death, are catalysts for change. Real Negus Don’t Die wouldn’t feel complete without acknowledging the conversation happening between it and Pecou’s recent DO or DIE exhibition at Emory University. At Emory, he used the egungun — a Yoruba masquerade that connects the living to ancestors — to link contemporary deaths to their ancestral legacies.

In many ways, the T-shirt does the same work, taking the compelling image of an ancestor and placing it with reverence on a living body. There’s a certain cultural competency needed to understand the emotional weight of Real Negus Don’t Die. The dead figures depicted aren’t shown in chronological order. They are presented as part of a continuous conversation on the failures and victories of society. The figure of rapper Nipsey Hussle, for example, has come to represent peacemaking and progress to many Americans, but to appreciate that, you must understand who he was and what he did for his community.

The title Real Negus Don’t Die comes from the Amharic term for royalty. By elevating these figures to royalty status, Pecou visually celebrates their lives and legacies. They continue to influence and empower people every day. Through death, they aren’t silenced — they are multiplied.