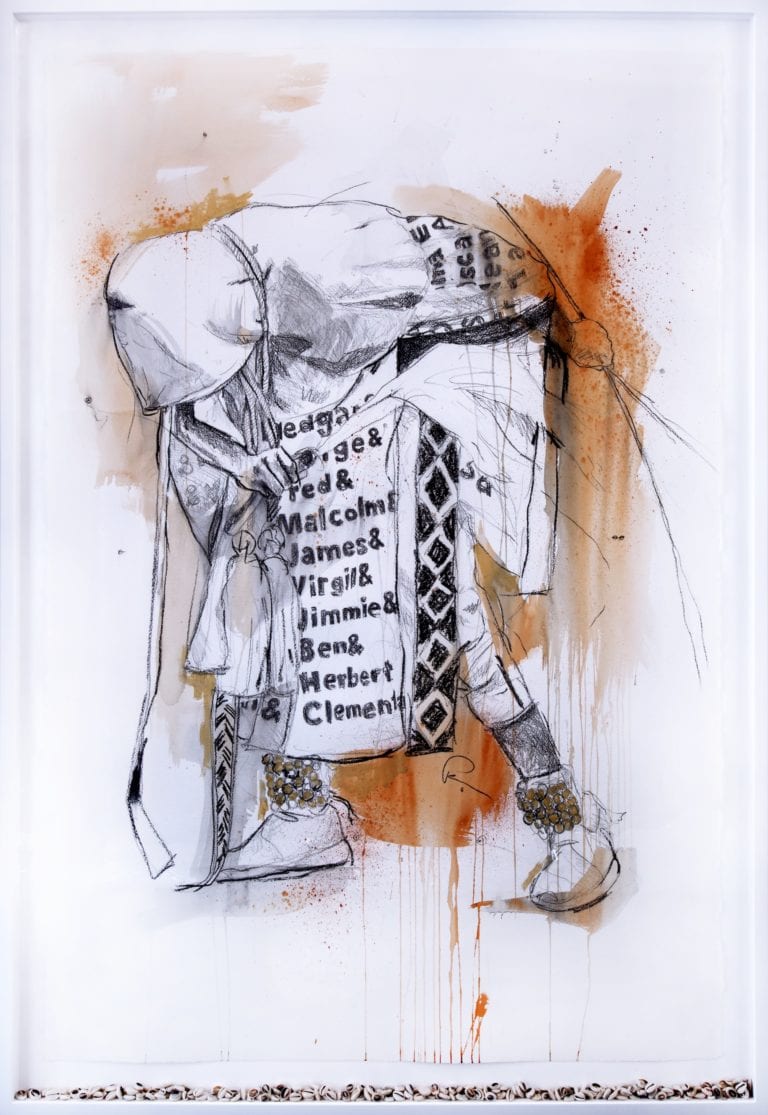 [In]visible man, Fahamu Pecou and the poetics of power

Poet Opal Moore and I recently visited the Fahamu Pecou exhibition, DO or DIE: Affect, Ritual, Resistance, at Emory University’s Michael C. Carlos Museum. The show, up through April 28, has been traveling since 2016, originating at the Halsey Institute of Contemporary Art in Charleston, South Carolina, in collaboration with the Carlos.

Its visual power, and the way it plays across time and cultural idioms, excited our conversation. We wondered whether our insights and responses might work better as a conversation instead of a typical review. Here is the result.

Deanna Sirlin: When I entered the gallery, I was struck by how the works were presented. We meet the artist as Dr. Pecou in a video. He’s the artist, the educator and a shaman. Pecou has said his exhibition is about the “affective power of art as a space of resistance.” Since you’ve known him and his work, did this entrance reaffirm your thoughts about him as an artist?

Opal Moore: I didn’t meet Fahamu as Dr. Pecou. I met him as a young artist through painter and performance artist Arturo Lindsay. Much later, his branding strategy — Fahamu Pecou is the shit! — alerted me to his emerging voice. Pecou as persona.

Suddenly, I was seeing his “tag” everywhere. Sort of like Banksy, but not with elaborate graffiti on walls. He began, I think, by “violating” the sacred doorways that mark social entrée. He made paintings of art magazine covers featuring his black body, his hip-hop persona. They were well-executed paintings, and funny! Black-signifying. It was trickster wit. Visual comments that both beckoned and smacked down the gatekeepers of American high-art culture. I recognized that swaggering hip-hop persona in the entrance.

But it did not reaffirm what I knew. It makes a series of connections, and, obviously, there is new knowledge here. It’s not Fahamu precociously jabbing at white America. It’s Fahamu — still wearing his hip-hop black body of confrontation and resistance — but with a different reading.

The show turns on the introduction of the Egungun figure from Yoruba tradition. And Fahamu has embraced the ritual power of art, which is different from how I understand graffiti as public art.

Sirlin: I think every aspect of the exhibition presents Pecou as educator-artist-performer. It’s actually his dissertation for his doctorate at Emory. He petitioned for, and was granted, a visual thesis.

The show, divided into three parts, pulls you into the space. The walls, painted charcoal gray, create a theatrical presence. Each part, or gallery, is a chapter of Pecou’s thesis. The first two galleries hold paintings of individuals and groups. The backgrounds are white with a pattern painted in a glittery white medium. These groups of figures in tableaux, or a single figure frozen in movement, are articulated in a particular way: the skin is painted so that its tonal range creates volume. The figures — gods and goddesses — have gold leaf on their skin. The third gallery holds four photographs of the same figures dressed in layered white fabrics, the heads covered and obscured, with sashes bearing the names of slain leaders — Martin, Medgar, George and Fred.

Moore: The first chapter, the first two galleries, introduces the primary characters, the goddesses or orisha, and the male figure whose story is one of discovery and transformation. I think of Frederick Douglass’ Narrative, when he tells the reader, “You have seen how a man was made a slave; you shall see how a slave was made a man.”

The exhibition tells how a body separated from mind and spirit will be rejoined to each. We begin the ritual “in medias res.” In “the way” and “something eternal,” the male spirit is supplicated to the female gods. In “something eternal,” he kneels before a pregnant orisha, who’s associated with beauty, love, prosperity, fertility and order. The peacock is her sacred bird. Her color is gold, which Pecou imagines as dappling her skin (not merely as adornment). The ritual concludes as she touches the traveler’s head, endorsing his journey.

Sirlin: In Water and Spirit, a transformative video work from 2016, the same figure in full dress is projected in a rectangular basin of water. We see ritual here — the darkness and wetness paired with the figure. In the next gallery, the figure is presented in full garb, the layers of white cloth of the work Egungun Masquerade.

Moore: I like your use of chapters to describe the movements in this story. Water and Spirit, a video projection, might be Chapter 3. It occupies its own dimly lit space in the second gallery,  a vivid shift from the opening paintings, which are static, to the ethereal, almost ghostly performance of the Egungun. The video is projected onto a pool of water, which refracts the image onto the ceiling (or sky?). Transfixing. I immediately thought of the waters of the Middle Passage, the mass death and massive cultural disruption of slavery. Imagine the Egungun spirit mask dancing over the Atlantic. 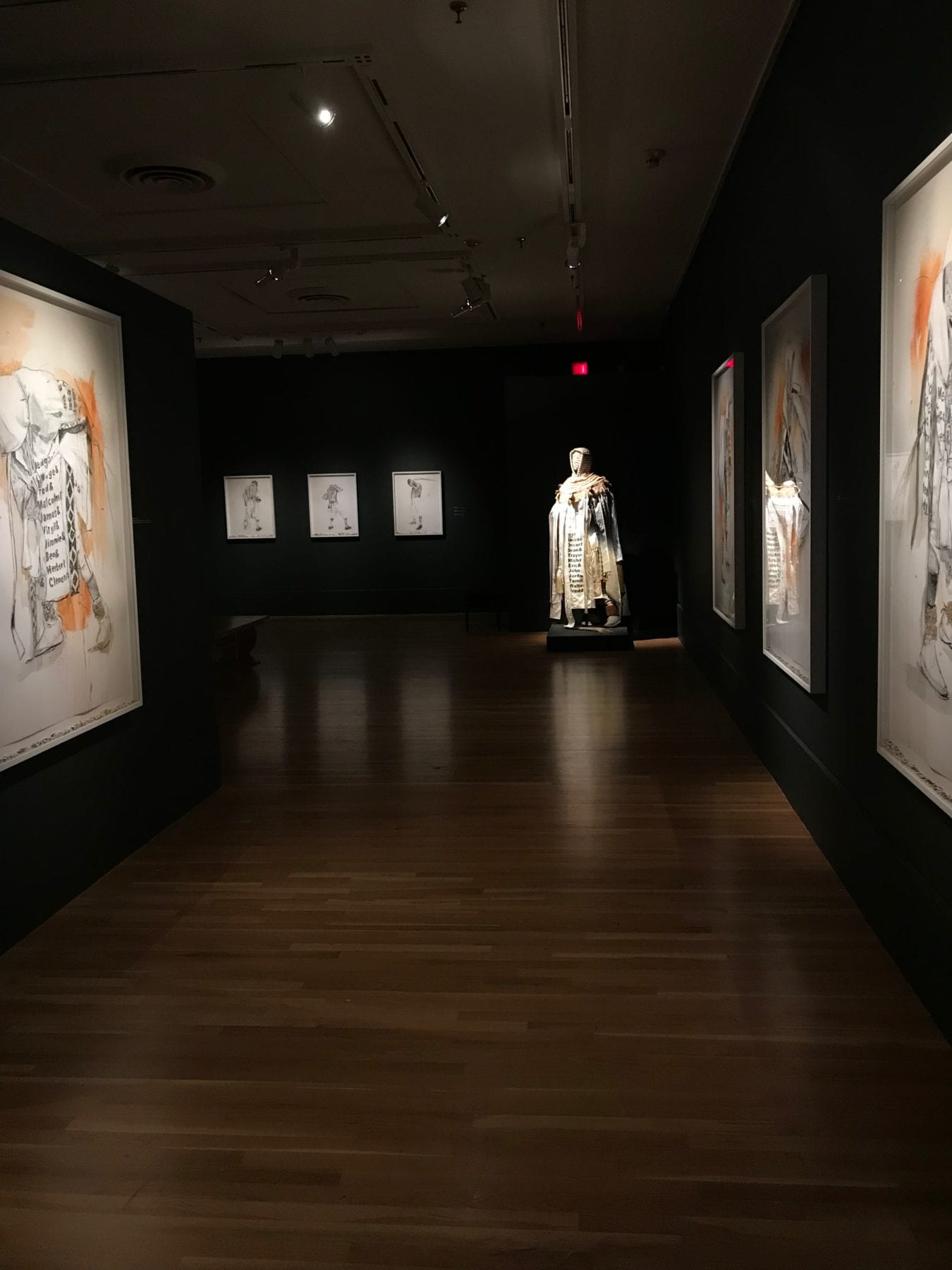 Sirlin: The same gallery holds drawings of Egungun in graphite and acrylic with cowries at the bottom of the frames creating an altar-like format. Pecou’s line is elegant and assured, his marks both energetic and descriptive.

Moore: These large gestural drawings splashed with acrylic color washes seem joyous despite the culture of violence that informs the narrative. The drawings, Egun Dance 1–4, suggest camera stop-action of the dancer’s movements. The drawings are very much about the living boy beneath the mask, as well as the murdered men and boys whose names are stitched onto the cloth panels (Martin and Medgar and George and Malcolm . . . the list lengthens throughout the exhibition).

The drawings also suggest the moment of “becoming,” when the spirit emerges or takes over the Egungun mask. The spirit and the body move the mask, with movement its true expression. The Egungun is an important ceremony in Yoruba culture. Traditionally, the Egungun is an ancestor mask that emerges periodically, usually in an elaborate celebration, to affirm the connectedness of family and community. It can bless or punish. I’ve seen these masks in museums but never the white cowry-shell mask — cowries were once used as money in West Africa — that Pecou’s New World Egungun wears.

Sirlin: The show concludes with a short film titled Emmett Still. This is the exhibition’s crescendo. The film’s poignancy begins with its title, calling up the 1955 murder of 14-year-old Emmett Till in Mississippi. Pecou shows us that not much has changed. Yet the exhibition is a call to action, healing and resistance. And most importantly for the viewer, to move forward.

Moore: The Egungun spirit mask is Pecou’s motif and critical framework. He finds a language and practice in the ritual of tradition but also claims it as an armature for change and reimagining the nature of power. In Yoruba, Egungun translates as “the power concealed” (see A. Hellman, “Die and Do: Egungun as a Form of Resistance and Recovery,” exhibition catalog, page 151). The show is about power as well as the difficulty of locating your own source of power. Emmett Still is an example of the wordplay typically found in jazz, blues and hip-hop lyrics. But in this short film (featuring performances by Atlanta rapper Killer Mike and others), Pecou enacts the exhibition narrative — a boy killed by a police officer. We see how a life is spilled in death. Now we see how a death will inspire life.

Opal Moore is a poet, fiction writer and essayist. She describes her poetry collection Lot’s Daughters as “an existential meditation on the never-told story of my family’s migration out of Mississippi.”