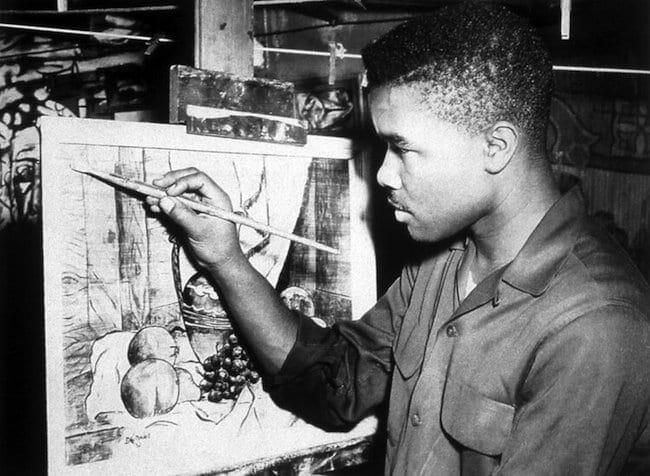 David C. Driskell was still a Howard University undergrad when he spent an important summer at the prestigious Skowhegan School of Painting and Sculpture in Maine. (Courtesy of Skowhegan)

When David Driskell: Icons of Nature and History opens Saturday at the High Museum of Art, the tightly curated survey will offer a broad overview of the painterly practice of an artist and scholar who helped define African American art and art history in the 20th century. The show, co-organized by the High and Maine’s Portland Museum of Art, was guest curated by the University of Delaware’s Julie L. McGee, who wrote David C. Driskell: Artist and Scholar (2006, 218 pages). The exhibit runs through May 9.

“We were hoping to open the show on David’s 90th birthday,” says Michael Rooks, the High’s modern and contemporary art curator. “He handpicked Julie, whose biography and monograph sets up the premise of the exhibition.” Driskell, 88, died April 1, 2020, of coronavirus complications. 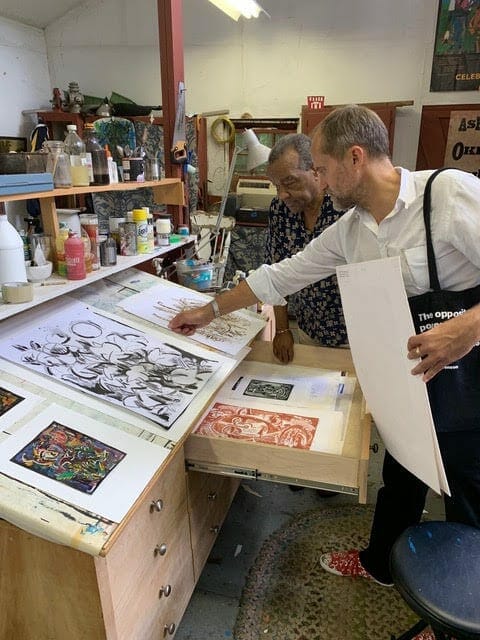 Curator Michael Rooks with David C. Driskell at his Maine studio. “If you talked to David as an art historian . . . he was like a preacher,” he says. “But when I visited, I saw his vulnerability for the first time and it made sense.” (Courtesy of Rooks)

The High’s relationship with Driskell dates to 1977, when it presented his landmark exhibition, Two Centuries of Black American Art, the first traveling museum exhibition dedicated to works made exclusively by African American artists since the year 1750.

Icons of Nature and History is the first exhibit to unite Driskell’s paintings and works on paper. Its 60 pieces are on loan from museums, private collections and the artist’s estate, and cover seven decades of his artistic output. Highlights include early figurative works that oscillate between abstraction and figuration, American landscapes painted en plein air, self-portraits and prints. 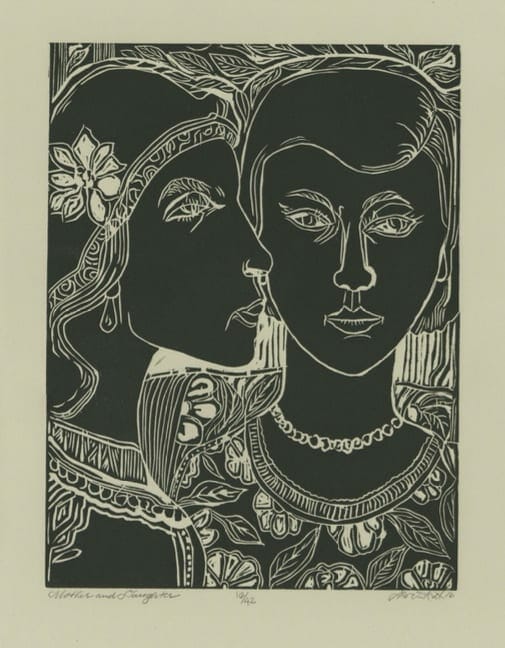 The influences of Driskell’s earliest mentors are especially evident in the High show. In Self Portrait, his mastery of line, color and draftsmanship reflect lessons learned at Howard University under professor Loïs Maillou Jones (1905-1988). The hand of James A. Porter (1905-1970), a pioneering art historian, is evident in Driskell’s facility with gradient, unmodulated color and luminosity in paintings like Homage to Romare. The signature touch of Morris Louis (1912-1962), an original member of the Washington Color School movement — whose experiments with color and paint application expanded the techniques of abstract expressionism — is echoed in Driskell’s studies of pine trees. His masterwork, Behold Thy Son (1956), painted in homage to Emmett Till, was Driskell’s way of both documenting and transcending America’s original sin of racism.

High members can preview the exhibition Friday (February 5). Pre-registration is required and space is limited to allow for social distancing. The museum uses a timed-ticket system for all exhibits and requires any visitor over age 2 wear a mask.

David Clyde Driskell was born June 7, 1931, in Eatonton, Georgia. His father was a sharecropper and a preacher, his mother a homemaker. Driskell picked up her core values of practicality and frugality early in life. He watched her turn threadbare scraps of material into quilted works of art and was never profligate with his own materials. To the contrary, Driskell’s collages resulted from failed experiments in printmaking when, instead of trashing a print, he’d tear it up and reuse the fragments in paintings. Hallmarks of Driskell’s studio practice included experimenting with media and mixed media, pushing boundaries, and recycling ideas, colors and paint. 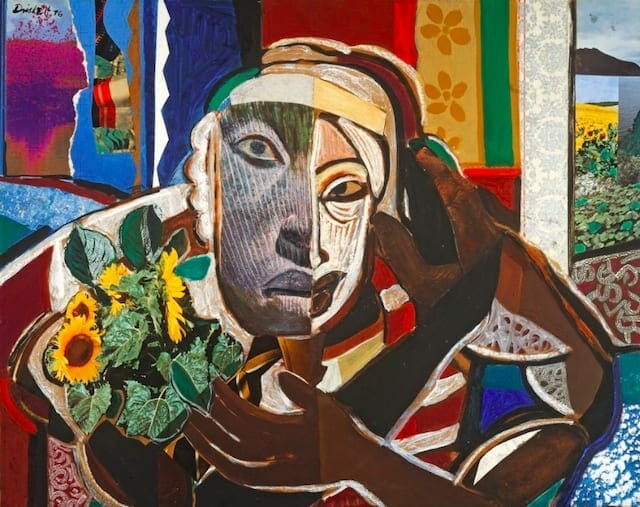 Icons of Nature and History, and its catalog, trace Driskell’s spiritual connection to nature to his scholarship at Maine’s Skowhegan School of Painting and Sculpture. Curator McGee says his love affair with landscapes likely began when he turned 5 and his family moved to western North Carolina’s Appalachian Mountains.

Apart from remembering Driskell as a giant of scholarship, mentorship and academic research, Gray — who’s on the board at the Thomas Museum — says she’ll never forget his humility when, at the pinnacle of his career, he said, “I am not a master. . . . I’m still trying to get there.”

“One of my concerns when David first died was that the High’s show, the first major survey of his work since his death, would be seen as a memorial,” McGee says. “But his spirit is alive and well in the exhibition. More critically, the enormity of David’s gift is what he left in all the individuals he mentored — and that is a tremendous way of seeing the world and the future. This exhibition presents an opportunity to see his growth as an artist from his days at Howard until his death. His legacy will live on through his work. So this is not closure, it’s another beginning.”