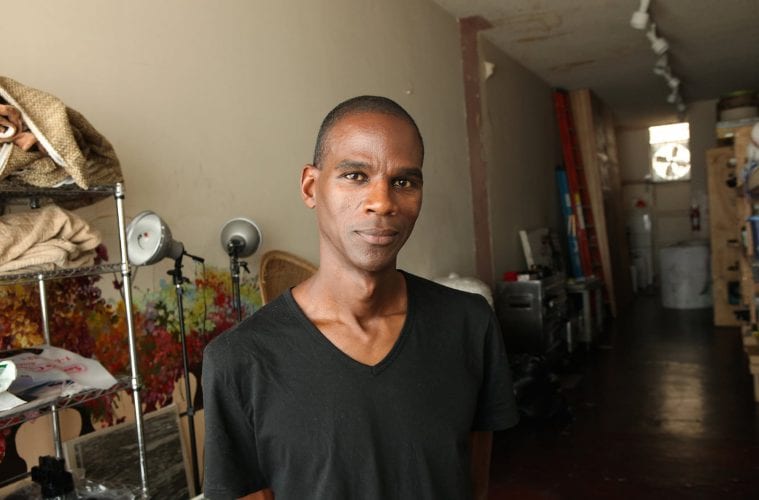 A conversation with Mark Bradford, the 2016 recipient of the David C. Driskell Prize

This article was brought to you by support from artcloud. Artcloud is a personalized tool for curating an art collection – whether you are an artist, gallery, or collector. With this social network and built-in marketplace, you can browse thousands of artworks by price, keywords, color, and more through the artcloud app.

The High Museum of Art has named Los Angeles-based artist Mark Bradford the 2016 recipient of the David C. Driskell Prize. Bradford, who will represent the United States at the 57th International Venice Biennale, is known for his monumental abstractions made of transformed materials scavenged from the southern California neighborhoods in which he was raised.

Bradford’s large-scale collages are physically labor intensive: accumulated surfaces are assembled and disassembled, created and destroyed. These painterly excavations work and rework Bradford’s own negotiation with what the artist calls “easy equations” of racial, sexual and socio-economic realities, which are directly upended through his process. ArtsATL recently spoke with Bradford on the occasion of his receiving the Driskell Prize.

ArtsATL: When I think about you, I think about the groundbreaking 2001 exhibition Freestyle curated by Thelma Golden at the Studio Museum in Harlem, New York. That show set a new generation of African American artists in motion—Julie Mehretu, Trenton Doyle Hancock, Rashid Johnson and Atlanta’s Kojo Griffin. Freestyle was a turning point in a lot of people’s minds about contemporary black art, and one that catalyzed a kind of new vocabulary for both identity and interpretation. You were just starting out when you were in that exhibition. How did you see yourself then?

Mark Bradford: I always saw my identity as something that was fluid, and I was actually surprised in art school that there was this wanting to over-determine or essentialize it. I noticed that I had a resistance to that. Of course, you ask yourself: “Do I have a resistance to being identified as black?” And I decided that, no, I don’t have a problem with being identified as black. I have a problem with the easy equations of what it means to be black in the 21st century. I’ve always stayed true to that fluidity within a racial narrative.

ArtsATL: The term “post-black” emerged alongside that exhibition. Were these ideas considered radical for the art world at the time?

ArtsATL: Contemporary American painting  often seems so largely apolitical—presumably because the market dictates what’s shown. It seems like African American  painters  are among the few who still use painting as a political platform. . . Even though it’s abstraction, your work  straightforwardly tackles very difficult subject matter: issues of race, economic disparity, AIDS.

Bradford: I can’t speak for other artists, but for me, it seems virtually impossible to separate—in this country—race from the body. Especially the black male body. The black body is racially politicized, heavily debated, profiled. You see it all the time. I just assumed a racial politic went alongside anything I was doing. It was almost impossible to turn away from the social completely. If I’m driving down the street and pulled over because I’m black—which has happened—that’s just simply profiling. So I’m constantly reminded on a daily basis. You kinda can’t forget it. It’s not like it’s going anywhere. When you wake up in the morning, you look in the mirror and think, “Oh, that’s me.” But then you forget it—you don’t think about it until someone reminds you.

ArtsATL: Your work “Scorched Earth” at the Hammer Museum examines the afterlife of the 1992 riots in LA. You said: “It’s about using a particular moment and abstracting it.” You often talk about “social abstraction” as compared to the Abstract Expressionists—where those painters turned inward, you turn outward.

Bradford: Yeah, exactly—you just basically described it. That was one of the tenants of Abstract Expressionism—looking in and “finding God”—and I’m sure he’s white and male, you know (laughter)… I just thought, I’m not going to go down that road. But I know what I actually can do: I can look out. I like history. I like civilization. I like the society in which I live. I love the politics. I’m interested in the world and the ideas of my time. But, how do I give myself the freedom to play in it? Abstraction gave me that. I can freely dismantle race and gender and class and sexuality because I give myself the freedom to not make it monolithic.

ArtsATL: Do you think about abstraction as an actual activist platform?

Bradford: No, I thought it was a political gesture initially to push back against easy narratives of blackness or easy equations [to] give us the real story, the real figuration. So yes, that gesture was political. It was me saying, you’re not going to over-determine who I am. I’m going to figure out who I am. I’m not sure who I am. And I’m certainly not going to make it easy for you to tell me who I am so I can have a career. I’m not ambiguous—or maybe I am ambiguous and ambivalent. I move. I give myself room to change and to grow. And I can find that within abstraction.

ArtsATL: You consider yourself as falling within the western lineage of abstraction.

Bradford: Sure I do. I’m right there. We can go back to American abstraction, 1950’s, all that stuff. Women were raised out of that history. African Americans were raised out of that history. I think it’s important. Abstract painting was a huge movement that influenced many parts of the world. It’s still one of the biggest imports in art that we have. And if you don’t think it’s important, look at the auction prices it still commands. It sits on sacred ground. I just thought, “Well, why not reanimate it? Why not question it? Why not demand that we look at it with a different view?” It’s not monolithic.

ArtsATL: Abstract Expressionism and the Civil Rights movement evolved within the same generation, yet never really intermingled in their development.

Bradford: Yeah, that great time around the 50s was the same time as Medgar Evers, Emmett Till.

There were abstract painters—Norman Lewis—who were looking at abstraction with a political gaze. It’s just that that was not the tenant that we wanted to sell to the world. I think it was conscious. It was like we don’t really want to talk about what’s going on politically, racially—because it’s problematic. Women were left out of it, too.

ArtsATL: The lives and stories and local color of the communities you grew up in are the heart of your work. Are these people also your audience? Do you consider the legibility of your work within the broader public when you’re making it?

ArtsATL: Your work is very physically demanding to make. Is the labor also part of the content?

Bradford: I grew up in a family that worked really hard. I find that the idea of the mind as being the thing and the body as something we don’t really bother with is a very Eurocentric idea. You know—poor people work hard, smart people think. How many sci-fi movies have we seen with this dome on his head and his body is completely shriveled up? I don’t think so. I like working hard. I know how to roll up my sleeves if things don’t work out. The only way I’ve ever gotten out of anything I’ve been in—good or bad—was to work. That’s just what I know.

ArtsATL: You’ve said that your childhood relationship with art wasn’t an art background per se but a making background. It makes me think of William Kentridge who referred to his process as the “seriousness of play.” That same childhood absence of self-consciousness seems like it’s present in your work.

Bradford: As a kid, I was very serious about the play… And I can’t believe I’m still the same. I still feel like I’m playing, like it’s all a lab. It’s still fun to me. It was fun to me when I was eight years old, you know, doing the Poseidon adventures in my bathtub (laughter), using all the dye from my mom’s kitchen, you know—[my mom] holding the camera. Still doing that. I’ve got other people to hold the camera now (laughter). I have to remind myself, like, “Mark, you have a show. You have to take this seriously!” And then I’m like, “Ok, yes, today is a serious day.” And you know, that lasts about 20 minutes. I don’t know if it’s good or bad—just the way I am.

ArtsATL: What is the single-most motivating force behind your work?

Bradford: To make work genuinely out of what you are really interested in—not what someone has told you that you’re interested in, or what you think you should be interested in, but to stand on the ground of what interests you. Because then that’s an authentic voice. Make your work and creativity about what moves you. Don’t worry about the market. Don’t worry about what’s hot or not hot. Follow your gut. At least it will hold your interest. Eight hours is a long time in the studio bullshitting. You know, if you’re making your artwork and watching eight hours of Housewives of Atlanta, you might wanna re-think.

ArtsATL: Does that get harder to do when you’re selling your work?

Bradford: No, not for me. I’ve worked with the same assistants for years, the same friends, the same everything for so long, that I don’t even know what’s happening until I walk out of the studio. I’m so in my own little world with my own little crew doing our own little thing. And they’re so not impressed with me—at all. I protect my serious play. I protect that space.

ArtsATL: Michael Rooks, the Curator of Contemporary Art at the High Museum, has really reshaped the contemporary vision at the Museum which has traditionally been so conservative. He’s brought in artists with real integrity and who push the limits. It’s wonderful to have you honored in Atlanta through the Driskell Prize. What are your thoughts on receiving the award? Is this cultivating a new and fruitful relationship with the High?

Bradford: It would be great. I look forward to getting to know the city and the High better and seeing where all that goes. It’s always good to support artists, to support artists’ work, either financial support through purchasing or having a show. Creating more sustainable ways for artists to do their work is always great. I always appreciate it. Every artist is at a different level. To show economic support can create sustainability of a practice.