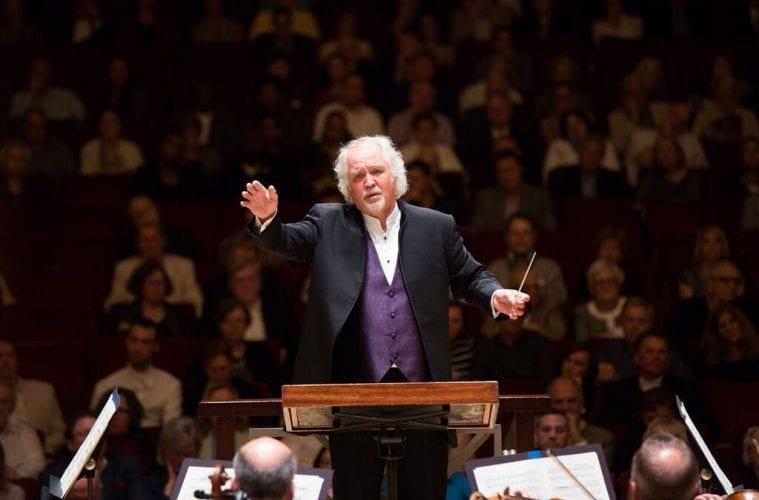 On Thursday the Atlanta Symphony Orchestra, led by principal guest conductor Donald Runnicles, performed Gustav Mahler’s monumental Symphony No. 9 in an intermissionless 90-minute concert at Symphony Hall. The program will be repeated on Saturday evening.

The symphonies of Mahler straddle musical eras, bridging the Austro-Germanic musical traditions of the late 19th century and the advent of 20th century modernism. In particular, the cataclysmic works he composed towards end of his life are in many ways sonic impressions of how the world would soon change forever with the onset of World War I, which he did not live to see but eerily predicted through his artistic sensibility and ethos.

Mahler’s Symphony No. 9, composed in 1909, was his last completed symphony, although it actually is his 10th — as the composer left his “Das Lied von der Erde,” which preceded it, unnumbered, though it is a symphony in form and function. That was the result of a superstition: other composers — Beethoven, Schubert, Bruckner, for example — never produced a symphony numbered “10” before dying. Mahler thought he had avoided that fate. Nevertheless, he died on May 18, 1911, before his Symphony No. 9 could be premiered. Mahler had been working on yet another symphony, No. 10, but it was left unfinished.

Donald Runnicles began his relationship as a guest conductor with the ASO in 1999. It quickly evolved and the ASO named him principal guest conductor in 2001, the same year Robert Spano became the orchestra’s music director, creating a collaborative artistic partnership that is rare in the current world of major orchestras.

Best known for his command of late 19th-century Austro-Germanic repertoire, Runnicles is a master interpreter of Mahler’s music. This performance of the Symphony No. 9 proved no exception. Runnicles totally owns this piece, and the virtuosic orchestra that is the ASO gave him an outstanding performance across its vast, lengthy span. It captured the attention of ear and mind from beginning to end. The orchestra is the star of the show — no soloists except those from within the ranks of the ensemble — and the musicians gave the music their very best.

The work is framed by two slow outer movements, the first marked Andante commodo (essentially, a comfortable walking pace), which alludes through several musical motifs to Mahler’s sense of his own mortality.

By contrast, the two inner movements possess a bit of sardonic edge. The second movement is a ländler — a kind of rustic country dance — which becomes somewhat unhinged as the music progresses, then picks up a slower tempo, after which it returns to the original ländler music and retreats to end with a humorously audacious pianissimo gesture from the extreme ends of the woodwind section, the piccolo and contrabassoon.

The third movement is a “Rondo-Burleske” that also is marked Sehr trotzig (very defiant), a rather rough-and-tumble section of music that involves extensive contrapuntal elements and the only one of the four with a strong forte ending by the full orchestra..

Like the first, the fourth movement is slow, but more so, initially marked Adagio; sehr langsam und noch zurückhaltend (very slowly and remaining cautious). After multiple fervent climaxes, the music grows more fragmented and disconnected, and quotes an earlier composition of Mahler’s, Kindertotenlieder (“Songs on the Death of Children”), from a passage in which a father is unable cope with the death of children, imagining they out just out somewhere playing in the sunshine.

After a fermata on a barline, the strings applied their mutes and played almost inaudibly on the movement’s final 27 measures to the end. The gossamer sound was punctuated by occasional rests, with the final hushed chord marked ersterbend — dying away — so that the silence hung in the air.

Of course, the chance to hear Mahler’s Ninth in live performance, especially when outstandingly rendered, is a rare opportunity. The last time the ASO performed it, with Yoel Levi conducting, was in 2004. Only one more performance remains, on Saturday night at Symphony Hall. If you miss it, you may have to wait another decade or so for a next opportunity in Atlanta.