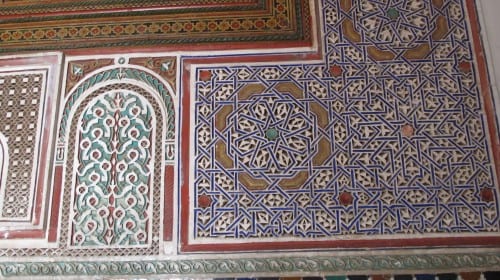 Good news: Here’s what’s happening with artists and critics in your neck of the woods

We make a practice of standing apart. How else to take the wide-angle view, to speak the tough words that commentary sometimes requires?

Today we will jump right in and celebrate good news: Atlantans, as you will see, are really going places. (The holiday spirit can inspire some lame puns.)

Marcia Cohen toured Tunisia and Morocco on a Fulbright Hayes fellowship for six weeks last summer, the only artist/art educator (and Jew) among a group of 15 educators studying religious diversity in the Maghreb. Cohen, whose preoccupation is color, applied for the fellowship in part because she wanted to experience the quality of color and light in North Africa, which had dazzled artists before her, from Eugène Delacroix to Sean Scully. When she applied she had no idea, of course, that the trip would come on the heels of the “Arab Spring.”

The political climate added an unexpected dimension to the experience, including occasional detours to avoid areas of unrest. “You could feel things changing,” she says.

Cohen took to photographing graffiti, the pentimenti of revolution, but she also got what she originally came for, and more, from the rich colors and patterns that festooned ancient mosques and synagogues (a Tunisian synagogue is pictured on our home page) to the healer’s wares in the market (below).

Cohen, an art professor at the Savannah College of Art and Design in Atlanta, has already brought her experience into the classroom. We’re looking forward to seeing its manifestation in her art. A hint might be found in her sketchbooks, which will be included in “In the Fold,” an exhibition of faculty sketchbooks that will run January 16 through February 3 in SCAD-Atlanta’s library.

Pamela Longobardi (below) is among a group of artists who will join a team of scientists on a research expedition in Alaska in June. Sponsored by the Alaska Sealife Center in Seward and the Anchorage Museum, the expedition will visit islands in Resurrection Bay to study the impact of marine debris on various ecosystems, a subject at the center of the Georgia State University professor’s work.

The artists will engage in shipboard conversations with scientists in different disciplines and gather materials for use in artworks that will be included in “Gyre,” a group exhibition at the Anchorage Museum opening in January 2014.

Longobardi learned about the project in 2010 when the Sealife Center’s conservation director, who had found her art on the Internet, rang her up. They hit it off, and he asked her to select the other artists. Participant include Mark Dion, Alexis Rockman, Sonya Kelliher-Combs and Andrew Hughes.

Longobardi has been to Alaska the past two summers — the photo above was taken last summer — to scout the islands in the bay. “I was disturbed by the amount of plastic that had washed up in the year between expeditions,” she says.

Alaska, she says, is the last outpost of U.S. wilderness, so it’s especially telling that its shores and even inland waterways are choking with trash. On the last trip, she found a jar from Costa Rica. During next summer’s expedition she’ll likely find detritus from the Japanese tsunami, which is already washing up on the shores of the West Coast.

This has been a banner few months for Cinqué Hicks (left). The Atlanta art critic had barely returned from delivering a paper at the International Association of Art Critics convention in Paraguay when he learned that he had won a $30,000 Creative Capital Andy Warhol Foundation grant for short-form arts writing. Not long before, he had celebrated the launching of “Noplaceness,” of which he is a co-author, and its parent publication, the biennial series “Atlanta Art Now,” for which he is creative director.

These achievements all bespeak Hicks’ concerns about broadening the scope and public impact of art criticism. In his convention address, he proposed a new model, which he calls “new action criticism,” in which the critic’s role is to facilitate public dialogue as opposed to passing judgment. He plans to use his grant, one of only three issued in the category, to work on a book-in-progress about the history of art criticism and how it helps create public culture. Hicks also plans to work in smaller Georgia cities to help artists there gain access to and be considered in the larger art-world dialogue, which is, of course, the mission of “Atlanta Art Now.”

Jiha Moon has received a $25,000 award from the Joan Mitchell Foundation in New York. Moon is the first Georgia artist to join this select group since Radcliffe Bailey and James Barsness (a UGA professor whose work is too little seen in Atlanta) won such awards in 2003. Her solo show at Saltworks will open April 14, 2012.

Ceramicist Diane Kempler has gone to India on a Fulbright-Nehru research grant to study ceramics there. During her four-month stay, Kempler, who teaches at Emory University, will document the traditional methods and customs of pottery production in villages throughout the country.